Accessibility links
My Mother's Story: Dot the Welder The legend of "Rosie the Riveter" has inspired romantic ideas about American women doing their patriotic duty in wartime. But for Dorothy Kelley, those motives were combined with more personal concerns. Recently divorced, she was raising four children on her own. 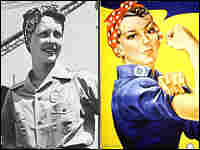 One of the Portland shipyard's workers, left, and a detail from a poster promoting patriotic duty. Portland Harbor Museum/War Production Committee hide caption

The Song That Started It All

The Four Vagabonds sing "Rosie the Riveter" by Redd Evans and John Jacob Loeb, from early 1943. 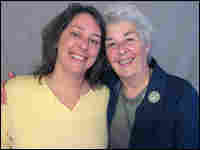 Joyce Butler with her daughter Stephanie in Portland, Me. StoryCorps hide caption

Some 6 million women worked in manufacturing jobs during World War II. They were known as "Rosies," after the iconic image of a woman in work clothes, flaunting her muscles, who appeared in recruitment posters, in a popular song, and in a Norman Rockwell painting on the cover of the Saturday Evening Post.

The legend of "Rosie the Riveter" has inspired romantic ideas about American women doing their patriotic duty during World War II.

But for Dorothy Kelley, the motives were more personal. Recently divorced, she was raising four children on her own. And after seeing women from the shipyard cashing $600 checks, she traded a job at a Montgomery Ward department store for long nights of welding.

Recently, Dorothy's daughter, Joyce Butler, visited StoryCorps to remember her mother's life in those days. Wearing overalls and heavy clothes against the cold, Kelly and the other women wriggled into the ships, welding ship's seams together in tight spaces.

Injuries were part of the job, Butler recalls. She says her mother's neck and chest became "all spotted with burn marks, from the sparks." She worked nights, so her days could be free for her children.

Butler says that after the war ended, her mother was forced to work two jobs, and her children were sometimes left to fend for themselves at home.

"But still, she was determined to keep us together as a family," Butler says.

Produced for 'Morning Edition' by Michael Garofalo. The senior producer for StoryCorps is Sarah Kramer.