Accessibility links
Study Notes 2003 Drop in Breast Cancer Cases The number of breast cancer cases dropped by seven percent in 2003, according to newly released figures, meaning about 14,000 fewer women were diagnosed with the disease than in 2002. 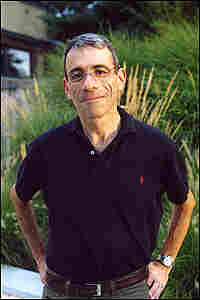 "It's going to be very important to see if these findings hold up over the next few years," says Dr. Eric Winer of the Breast Oncology Center at Boston's Dana Farber Cancer Institute. www.tourofhope.org hide caption

The number of new breast cancer cases dropped drastically in 2003 -- and researchers now think they may have pinpointed a likely reason. According to a new analysis from M.D. Anderson Cancer Center in Houston, the drop may reflect the fact that a large number of women stopped taking hormone therapy the year before.

Some 14,000 fewer women were diagnosed with the disease than the year before -- a 7-percent decline from 2002, when the American Cancer Society estimated 203,500 new cases.

There may be other reasons for the decline in cases. Dr. Eric Winer, who directs the Breast Oncology Center at Boston's Dana Farber Cancer Institute and chaired the session where the data was presented, provided answers to questions raised by the study.

Is there a solid link between the drop in cases and the big drop in women taking hormones?

It may be premature to call the link "absolutely solid," Winer says. But it's very plausible for a number of reasons. First, most of the drop occurred in women over age 50 -- in other words, women who might previously have been taking estrogen or estrogen and progestin. Second, there is evidence that blocking estrogen can cause estrogen-sensitive cancers to stop growing or to shrink over the course of a few months. So when women stop taking hormones, the result could be that a tumor shrinks or perhaps even goes away.

Why did so many women stop taking replacement hormone therapy?

The medical community has long known that these drugs can increase the risk of breast cancer, at least to a modest degree. But before 2002, the consensus was that other health benefits offset that risk. In 2002, big studies came out indicating that the long-term use of hormone replacement therapy, particularly the combination of estrogen and progestin, "did not seem to convey the health benefits that people once thought that they would," Winer says. So the number of women taking hormone replacement therapy declined dramatically.

Are there other possible explanations for this drop?

The use of mammography declined slightly during this time. "But it's hard to imagine that that decrease could lead to this fairly dramatic drop in incidence," Winer says. In addition, he notes, more and more women are taking drugs like Raloxifene -- or what's commonly called Evista. Prescribed for osteoporosis, the drug also decreases breast cancer risk. But again, the size and suddenness of the drop in cases doesn't correspond with a sudden change in the usage of Raloxifene.

Will the decline continue?

What does this news mean for women now taking hormone replacement therapy or who may have taken it in the past?

"For a number of years, we've had good reason to believe that women should not take prolonged courses of hormone replacement therapy -- particularly the combination of estrogens and progestins," Winer says. He thinks the study provides some evidence that taking such a therapy years ago does not increase a woman's risk of breast cancer in the future. If it did, there wouldn't likely have been such a sharp drop in new cases.

That doesn't appear to be what the study is saying. Rather, the study suggests that very small tumors that might have grown big enough to be detected in 2003 instead shrunk as a result of stopping hormone replacement therapy. So it's not a matter of the hormones causing cancer as much as promoting the growth of cancer. "Being on estrogen, or a combination of estrogen and progestin, for some women, might accelerate the growth of cancer," Winer says. "Stopping that treatment is the equivalent of taking one's foot off the accelerator." Now whether or not that cancer ultimately would start growing again and be diagnosed in the years ahead is something we can speculate about but can't say for sure.

So the cancer could still appear at some later date?

It is possible. But the hope is that at least some proportion of women who might have been diagnosed with cancer in 2003 will never be diagnosed because they stopped taking hormone replacement drugs. "These are epidemiologic findings, and that's quite different from following women in the context of a clinical trial," Winer says. "And so I think we have to be careful about the conclusions. Nevertheless, it is very interesting."