Accessibility links
'Dreamgirls' Does Justice to a Cinematic Musical Jennifer Hudson is among the main attractions in Bill Condon's strong film adaptation of the Broadway musical Dreamgirls, opening in limited release Friday.

Listen
'Dreamgirls' Does Justice to a Cinematic Musical 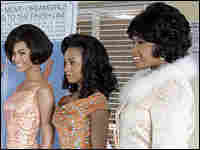 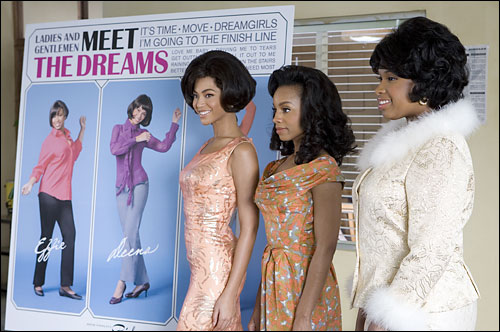 Jennifer Holliday portrayed Effie in the original Broadway version of Dreamgirls. She won a Tony for her performance.

The new movie Dreamgirls — based on the 1981 Broadway musical — got five Golden Globe nominations Thursday.

It will open Christmas Day in most of the country, but to burnish its luster for awards season, it opens exclusive "road-show" engagements Friday in New York, Los Angeles and San Francisco. "Road-show" means there's reserved seating and souvenir programs, just like "live" theater, along with a higher ticket price.

When Dreamgirls actually was on stage, the one thing that everyone said about it was that it felt cinematic. So here it is in the cinema, and guess what? It's pretty cinematic.

The danger, of course, is that as a backstage story (about The Dreams, a '60s girl group a lot like Diana Ross and the Supremes), what had been cinematic on stage would turn stagey on screen. The Broadway version used whirling turntables and curtains-going-every-which-way to give the feel of swooping cameras.

In the movie, director Bill Condon uses those devices, too, except he actually has swooping cameras. So when, for instance, pretty Deena, silly Lorrell and full-figured Effie get hired to sing backup for a James-Brown style rhythm-and-blues singer, Eddie Murphy, who plays the singer, can sit down at a piano backstage, full of charm, and when the tempo picks up, the camera can start moving, still backstage. Then some curtains fly sideways, and the camera swivels hard, and they're all in costume before a cheering crowd.

The energy is so high in sequences like this — and there are lots of them — that it almost doesn't matter that we've seen this story before, in Ray and other film biographies about the "heartbreak" of musical stardom.

Of course, biographies are tied to real people and specific heartbreak, whereas Dreamgirls is free to invent things. What it has invented — besides a Motown milieu just far enough removed from reality to avoid lawsuits — is a showbiz icon and the talent that gets stepped on, on everyone else's way to the top.

Jennifer Hudson plays Effie, a big-boned, enormous-voiced Dreamgirl who gets replaced both onstage and in the bed of her lover, by prettier, slimmer, Deena, played by Beyonce Knowles. Deena is graceful, and can sing, but she and everyone else are blown off the screen when Effie cuts loose in "And I Am Telling You I'm Not Going," the anthem that has always been this show's highlight.

Now, lyrics notwithstanding, Effie does go. In the second half, she becomes secondary for long enough that you have time to realize how conventional the Dreamgirls story is. Condon's transitions and swooping camera work are still amazing, as are the hairdos, fashions and decor. And if the music isn't quite '60s Motown, it certainly pumps up energy levels.

But Jennifer Hudson is why you're there, and at the preview I attended, when she said she wasn't going, a movie audience that had watched her get booted from American Idol in real life and now from a fake singing group, started cheering as if she were right there in the theater to hear them. It seems clear that this Dreamgirl is gonna go wherever — and whenever — she wants.