Iraqi Prime Minister Nouri al-Maliki reaches out to Sunni Arabs, offering to bring senior former Army officers from the Saddam era, Baath party officials, and even some insurgents into the fold. 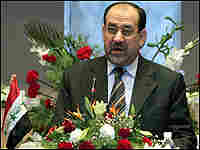 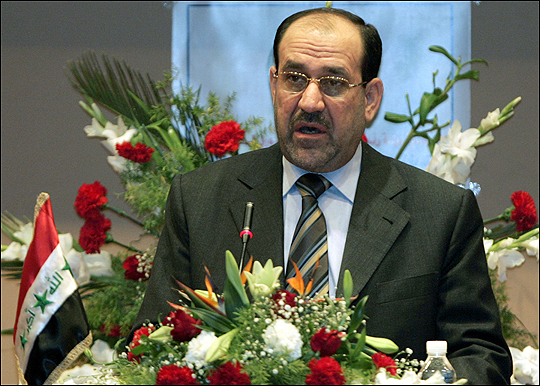 From NPR News, this is ALL THINGS CONSIDERED. I'm Debbie Elliott.

Iraq's Prime Minister Nouri al-Maliki made a bid today to undermine the Sunni-led insurgency. At a national reconciliation conference in Baghdad, he outlined a plan that would bring former Iraqi army officers, former members of Saddam Hussein's Baath party, and even some insurgents into political life.

One Sunni who is already playing a leadership role is Vice President Tareq al-Hashemi. He's been in Washington, where he met with President Bush this week. I spoke with the vice president last night and we'll hear that interview in a few moments. But we begin with today's national reconciliation conference in Baghdad.

NPR's Corey Flintoff reports there's deep concern over the powerful groups that did not show up.

COREY FLINTOFF: One of the most intriguing questions of the conference was who exactly would be representing the insurgents. Faisal al-Kharagauli(ph), a constitutional monarchist, was definite about the need to deal with the people who have been fighting for more than three years against the U.S. and the Iraqi government.

Mr. FAISAL AL-KHARAGAULI (Constitutional Monarchist): Their associates should be brought to the negotiating table, and to converse on their political means is the way to solve the problem, not to pick up arms.

FLINTOFF: But al-Kharagauli was vague about who was speaking for them.

Mr. AL-KHARAGAULI: Individuals who have some links with the resistance.

FLINTOFF: Many critics of U.S. policy in Iraq say the Sunni-led insurgency was fueled by two decisions made by U.S. administrator Paul Bremer shortly after the U.S. invasion. Those decisions were disbanding the Iraqi army and excluding high echelon members of the Baath party from government jobs. Both moves alienated Sunni Arabs who under Saddam Hussein held most of the country's higher military and administrative posts. Some of the displaced Sunnis then turned to the insurgency.

FLINTOFF: Walid Mahmoud al-Mashadani describes himself as a member of the resistance. But he urged people to distinguish between terrorism and resistance. Mashadani has been living in Syria. He says the people he represents would be willing to join the political process if it meant preventing an all-out collapse of the country.

FLINTOFF: He says if all solutions fail, his groups is ready to peacefully form a national salvation government.

Prime Minister Maliki addressed the return of former army officers by inviting all levels of the officer corps from Saddam Hussein's army to apply for jobs or pensions. He was less able to deal with the law that keeps former members of Saddam's Baath party from returning to their jobs. Many participants said the law should exclude accessories to Saddam's crimes but not people who joined the Baath party because it was the only way to get ahead.

AL-KHARAGAULI: The Baath was a way of life in Iraq. If you're not a Baathist, you can't be promoted in your work.

FLINTOFF: No matter how much unity the conference achieves on ways to engage with the Sunnis, the government will still have to contend with powerful groups that refuse to take part in the talks. Those include the anti-American Shiite cleric Moqtada al-Sadr, though Shiite politician Ahmed Chalabi says that's to be expected.

Mr. AHMED CHALABI (Shiite politician): Moqtada al-Sadr never attended a political meeting or a conference, but his supporters are there.

FLINTOFF: Former Prime Minister Iyad Allawi, a secular Shiite, stayed away, as did an influential Sunni group, the Association of Muslim Scholars. Chalabi, a one-time Pentagon favorite, said a lot of the absences are political posturing, but he added that he feels the work at this conference has been a genuine effort to deal with Iraq's crisis.

The delegates reconvene tomorrow. In a climate of increasing violence, they have every incentive to work for success.