Accessibility links
Ahmet Ertegun Earned Aretha Franklin's Respect Singer Aretha Franklin talks about the legacy of the late hitmaker Ahmet Ertegun. The co-founder of Atlantic Records died this week at 83. He helped discover and develop many artists, including Ray Charles, Led Zeppelin and Sonny and Cher.

Singer Aretha Franklin talks about the legacy of the late hitmaker Ahmet Ertegun. The co-founder of Atlantic Records died this week at 83. He helped discover and develop many artists, including Ray Charles, Led Zeppelin and Sonny and Cher.

In the early, 1960s Aretha Franklin sounded like this.

Ms. ARETHA FRANKLIN (Singer): (Singing) What is romance? Was I the one who love? It's heartbreaking misery. Was I the one you love?

ELLIOTT: Then something happened to make her sound like this.

ELLIOTT: This is the Aretha Franklin who had signed in 1966 with Atlantic Records, the company founded by Ahmet Ertegun. Ertegun and his co-producer, Jerry Wexler, decided simply to sit her down at the piano and let her do her thing. When Ahmet Ertegun died this week, we called the queen of soul. I asked if she remember the first time they met.

Ms. FRANKLIN: The very first time was, yes, in the offices of Atlantic Records. And there was no question that he was the commander-in-chief. He carried that authority and that air. But it wasn't arrogant. It was friendly and warm. He nurtured and he cared and he was so protective of my voice, my career and myself. Because I was a very young girl when I signed with Atlantic Records, a long way from home, but Jerry and Ahmet always oversaw everything with my career.

ELLIOTT: When you say they were protective of your voice, what did he do?

Ms. FRANKLIN: Protective of my voice in, do you think you're smoking a little too much? That kind of thing.

Ms. FRANKLIN: Because I used to smoke when I first signed with them and I was smoking like two packs of cigarettes a day. And so casually, you might hear a mention of, boy, maybe you're smoking a little too much, or do you think you're smoking too much? Or that kind of genuine concern.

ELLIOTT: Did they chaperone you because you were such a young woman?

Ms. FRANKLIN: No, they didn't chaperone me. My father sent a chaperone with me to New York. But being my record company and being the kind of people that they were, they simply just checked on me to see that everything was okay.

ELLIOTT: What do you think his legacy will be?

Ms. FRANKLIN: Certainly music, and the fact that he was such a great humanitarian and one of the last great record men. And the fact that he cared about his artists and he cared about people. He had wonderful, wonderful stories about many of his early artists long before I got to Atlantic Records, like Joe Turner and Ruth Brown and The Drifters and Benny King and Herbie Mann and Ray Charles and all of these different artists who were there long - and some of my favorite artists long before I signed. And the fact that he'd find and he recognized and he appreciated so many African-American artists, as well as putting them in executive and power positions. God bless Ahmet Ertegun for everything that he did for me. I'm very, very thankful. He had a genuine love for music.

ELLIOTT: Well, thank you so much. It has been a pleasure to speak with you.

Ms. FRANKLIN: It's been my pleasure. Thank you.

ELLIOTT: The great Aretha Franklin, remembering her producer and her friend, Ahmet Ertegun. Mr. Ertegun, the legendary founder of Atlantic Records, died this week at the age of 83. He had been in a coma for the past two months after falling backstage at a Rolling Stones concert in New York. Aretha Franklin joined us by phone from her home in Michigan.

(Soundbite of song "The House That Jack Built"_ 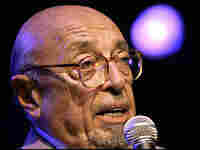 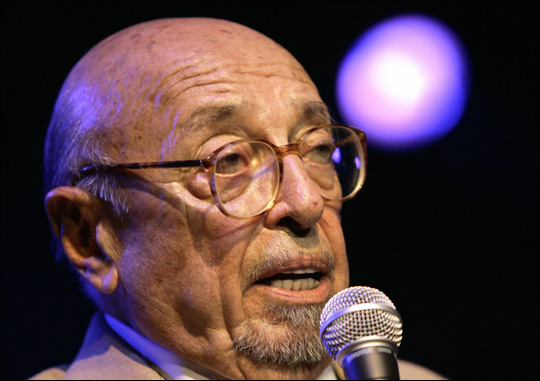 Ahmet Ertegun gives a speech at the opening night of the 40th Montreux Jazz festival on June 30, 2006, in Montreux, Switzerland.

In the music business, people with an acute ability to sense something in music that others do not are said to have great "ears." Ahmet Ertegun, who died Wednesday at 83, had some of the best ears in the business.

Ertegun was the founder of Atlantic Records and a music industry pioneer. He had been in a coma since a fall at a Rolling Stones concert in New York in late October.

The son of a Turkish diplomat, Ertegun fell in love with jazz in London after seeing Duke Ellington's band in 1932. Inspired, the young Ertegun eventually staged concerts at the Turkish embassy in Washington. Black and white musicians were able to play together at the shows, something they couldn't do beyond the embassy gates.

Presented with a choice of either following his father's diplomatic footsteps or pursuing music, Ertegun borrowed $10,000 from a family dentist in 1947 and started his own record label.

The business plan was simple, he once told PBS's Charlie Rose: supply music to an audience the major record labels were ignoring.

In pursuing black artists and the black audience, Ertegun and Atlantic helped what the industry called "race records" find a larger audience as rhythm and blues, with acts like Ruth Brown, the Drifters and a young blind pianist living in Seattle named Ray Charles.

"When I first heard Ray Charles, he was a flop artist on a small label in California," Ertegun said on NPR's Morning Edition in 2005. "He hadn't sold any records. And I bought his contract for $2,500."

By 1959, Charles had topped the charts with "What'd I Say," and a major label, ABC-Paramount, came calling with a deal he could not refuse.

Ertegun never stopped finding new talent. He put together an extraordinary hit-making production team that included engineer Tom Dowd and producer Jerry Wexler, who was also a partner in Atlantic. Together they helped turn hidden talents into stars. Among their successes was Aretha Franklin, a young church-trained singer who became the queen of soul.

But Atlantic's successes would have been short-lived if Ertegun had not recognized the potential of the new sound of the late 1960s: rock 'n' roll.

Ertegun and Atlantic moved effortlessly into the rock era, signing Cream, Led Zeppelin and Crosby, Stills, Nash and Young, among many others.

Ertegun always attributed his successes to his love for jazz and blues, and to the musicians who made the music.

Rolling Stone magazine founder Jann Wenner says that the music captivated Ertegun and he, in turn, was devoted to the music.

"Everybody knew he was the best music guy," Wenner said.