Fighting between rival forces loyal to Palestinian President Mahmoud Abbas and Prime Minister have sparked fears of a civil war. Fierce battles this weekend between Palestinian factions in Gaza were set off Saturday when Abbas called for new elections. Eric Westervelt talks with Debbie Elliott. 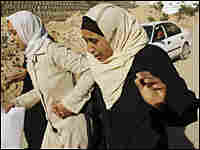 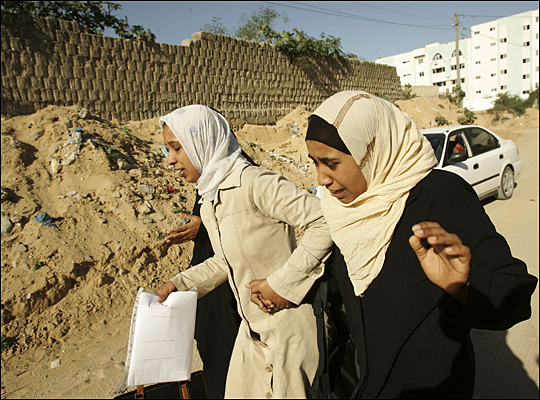 Palestinian girls flee an area were members of the Al-Qassam military wing of Hamas clashed with presidential guards Dec. 17, 2006, in Gaza City.

Fierce fighting erupted this weekend between Palestinian factions in Gaza. The battles between rival forces of the president and prime minister have some Palestinians fearing they may be on the brink of a civil war. But late Sunday evening, there were wire service reports the two sides had agreed to a truce. The reports quoted an unnamed official of the president's Fatah faction.

I asked NPR's Eric Westervelt, who has been covering the Gaza clashes, about the reports of a truce.

ERIC WESTERVELT: Well, Debbie, the ceasefire is not confirmed, and even if it is real, we'll have to see. We've had Palestinian ceasefires and so-called unity agreements announced before, only to see them quickly disintegrate. And ongoing gunfire, we have to say, was heard late into the night in Gaza City, and a key question remains whether the gunman on the street will actually listen to their factional leaders and pull back from further violence. But this weekend, Debbie, we saw no signs of that happening.

ELLIOTT: Why is it that the violence has escalated? We've been hearing about skirmishes between Palestinian factions for weeks, if not more, but things seemed to really heat up over the past few days.

WESTERVELT: That's right. The two sides have been clashing for months, Debbie, but in the last few days, Debbie, we really saw this perfect storm of violent acts and political rhetoric. There was an assassination attempt alleged on a Hamas leader and Prime Minister Ismail Haniyeh late Friday.

Hamas then accused a senior Fatah leader, a powerful official named Mohammed Dahlan, of orchestrating that attack. That set off a series of tit-for-tat battles, and yesterday Fatah leader and president Mahmoud Abbas called for early elections to try to end the political stalemate with Hamas and the crippling international sanctions the Hamas-led government, their election has prompted.

Hamas called that an attempted coup d'etat. That just set off even more clashes.

ELLIOTT: Now, is this violence different from what we've seen in the past in this region?

WESTERVELT: I think in the factional fighting in Gaza Strip, Debbie, it's different. We saw the use of heavier weaponry this weekend not seen in clashes so far. Today began with an attack on a Mahmoud Abbas presidential guard compound. It killed one member of his elite force and wounded four others. That attack was with rocket-propelled grenades. We're told that Hamas gunmen, suspected Hamas gunmen fired some 25 rocket-propelled grenades. We hadn't seen that kind of coordinated attack with that kind of firepower before. Later, suspected Hamas gunmen fired mortar rounds at Mahmoud Abbas's compound in Gaza. Again, we hadn't seen that kind of firepower.

There were other incidents of violence. In today's fighting at least three people were killed. Two civilians caught in the crossfire. So this weekend we did see an escalation.

ELLIOTT: NPR's Eric Westervelt in Jerusalem. Thank you so much.