Accessibility links
Charges Mount for Organizer of Snowball Express There is additional information that raises questions about the background of Michael Scott Kerr, the organizer of this weekend's Snowball Express event for military widows and their children. 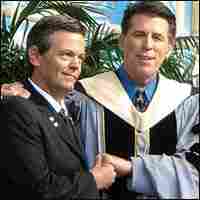 Michael Kerr (left) with the Reverend Robert Anthony Schuller of the Crystal Cathedral, one of the organizations that sponsored Snowball Express. Kerr founded the group to help family members who lost a loved one in Iraq or Afghanistan. Snowball Express hide caption

There's additional information that raises questions about the background of Michael Scott Kerr, organizer of this past weekend's Snowball Express event for military widows and their children. The Southern California event treated as many as 900 family members to a Christmas pageant, a day of extreme sports at Oakley, Inc., a shopping spree at the Irvine Spectrum Center and free admission to Disneyland.

Here's a summary of what NPR learned about Kerr and Snowball Express, including explanations that Kerr has provided:

According to state records in Arizona, Michael Scott Kerr owes $50,013.08 in unpaid child support for two children who are now 12 and 9 years old. Kerr is also named in a five-year-old but active arrest warrant in Maricopa County, Ariz., for failure to pay child support. A spokesman for the Maricopa County Sheriff says Kerr is subject to arrest any time he steps inside the state of Arizona.

Other records obtained by NPR show that Kerr recently resumed monthly child-support payments but still owes $44,870.70, including interest. On Friday, Dec. 15, when both NPR and the Los Angeles Times were seeking responses from Kerr, he quietly suggested a settlement of $20,000 for the delinquent child-support account, less than half the amount owed, according to Judy Kerr, his former wife. She told NPR she declined because she believed Kerr was merely offering the settlement to avoid bad publicity.

"I feel no inclination to give him an easy way out of something he should have been doing all along," Judy Kerr said. She added that she was given just one day to consider and accept the offer.

Michael Kerr did not mention the settlement offer when he spoke with NPR Friday nor in a written statement he provided. He acknowledged that he failed "to pay my obligations to my children." "For a time," he wrote, "my life was a mess. I became addicted to drugs." He added in the interview that he is "doing everything I can to get that [child support] situation squared away."

A biography posted on the Web site of a recent employer says Kerr has a Bachelor of Science degree from the University of California at Santa Barbara. The biography also says Kerr is a licensed real-estate salesperson in California. Neither claim is true, according to state and university records.

Kerr blames the errors on his former employer, the Saywitz Company. He claims the biography was based on a resume that had stated he only attended the university. A spokeswoman for Saywitz says the biography was provided by Kerr and received only minor copy editing. Kerr also says he had applied for a new real-estate license and had submitted the paperwork to Saywitz, which was supposed to forward it to the state. Still, the claim of a real-estate license appeared in the biography even though no license had been granted.

Fundraising for the Snowball Express

In several e-mails obtained by NPR, Michael Kerr says contributions to the Snowball Express are tax deductible. But neither the Snowball Express, nor any of the other entities established by Kerr for this past weekend's event, have tax- exempt status or are registered as charitable organizations in California.

The other entities include the Orange Coast Snowball Express and the M. Scott Kerr Foundation. The Kerr Foundation has filed Articles of Incorporation in California but is not a registered charity, according to state records. It is also not a tax-exempt organization under federal law, according to the Internal Revenue Service. California law requires any group soliciting and collecting charitable contributions to register within 30 days of receiving the first contribution. The Kerr Foundation has been soliciting and accepting funds longer than 30 days, according to some contributors and groups supporting the Snowball Express event.

One associated entity appears to be raising money legally -- the Rotary Snowball Express. It funnels contributions to a Rotary Club Foundation, a legitimate, tax-exempt charity.

NPR has asked Michael Kerr for a copy of his tax-exempt application but he has not responded. In a written statement, Kerr indicates that his fundraising practices have been directed by accountants and that funds are funneled through the tax-exempt Rotary Club Foundation. But some contributions are endorsed by Michael Kerr's current wife and the Kerr Foundation, not the Rotary Club Foundation. One solicitation on the Snowball Express Web site suggests that checks be made out to Trading Places/Snowball Express. Trading Places appears to be a for-profit timeshare company and is not registered to receive charitable contributions.

The Snowball Express Web site also once carried a statement about investing the money raised: "The foundation invests contributions and donations in secure, long-term investment vehicles to ensure the funds are there when the children need it." The statement disappeared from the Web site in the last two weeks.

This statement, and the rest of the information about Kerr, concerns Debbie Gregory, who operates MilitaryConnection.com, a Web site that covers resources for soldiers and veterans. Before learning about Kerr's past, Gregory had helped publicize and organize the Snowball Express event. She speculates about "the potential to exploit these families," perhaps by offering to invest their money.

"Many of these [military widows] are very young themselves and do not have any experience in financial investments," Gregory says.

In fact, Kerr was once a stock broker but his license was suspended, according to a suspension letter obtained by NPR. The letter does not explain the reason for the suspension.

Michael Kerr views himself as a redeemed soul.

"I am a man who has been through some very tough times," he told NPR. "And by the grace of God I was pulled up and I've been able to motivate some people to do this wonderful event for those children and families of our fallen heroes."

For some, redemption isn't warranted until past debts are paid and confidence is proven. Karen Zacharias, a writer who lost her father in Vietnam, was excited about the Snowball Express event.

"I was 45 years old before I met another person whose father died in Vietnam," Zacharias said. "I felt isolated, feeling I was the only person beside my siblings [who lost a dad to the war.] So I was excited that the children of this current war wouldn't have to wait a lifetime to make friendships" with kids experiencing the same loss.

Zacharias attended many of the Snowball Express events and helped with grief counseling for widows and children.

"Every widow I spoke to was so appreciative," she said. "Michael Kerr is a problem. But the event went off wonderfully thanks to the dedication of so many good-intentioned people."

But Zacharias was shocked by the revelations about Kerr. "When you throw yourself in the public forum in the manner that Michael has, you need to make sure your integrity is above board from the get-go and things are done according to the law," she said. "And that doesn't seem to be the case here."

The Los Angeles Times ran a story Saturday about the Snowball Express founder's "shady past."
The Snowball Express Web site describes the group's aims and activities.
The OC Weekly has questioned the background of "mega-philanthropist" Michael Kerr.