Accessibility links
Violent Crime Surge Hints at Troubling Trend The FBI reports violent crime rose across the country in the first half of 2006, the second straight annual increase. Particularly disturbing to police officers and those who study crime is the sharp increase in murders and robberies. 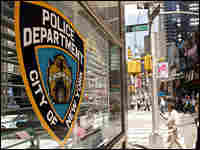 A view of the Times Square police office in New York City. Across the United States, in big cities and small, violent crime rose 3.7 percent between January and June, compared to the first six months of 2005. Twenty-eight more people were murdered during that period 2006 in New York City, for example, while the college town Norman, Okla., saw its total number of homicides jump from zero to three. Spencer Platt/Getty Images hide caption 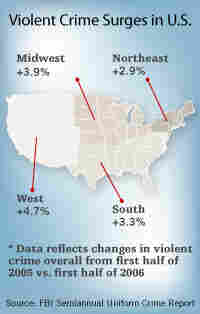 Violent crime rose in cities and towns across the country in the first half of 2006, according to preliminary data from the FBI. The findings signal that a long period of declining crime in the United States is not just at an end, it's heading in the other direction.

Violent crime rose in cities and towns across the country in the first half of 2006, according to preliminary data from the FBI.

The surge in violent crime is an ominous sign for police officers and criminologists who were hoping last year's increase was just a blip.

"Robbery has jumped up by over 9 percent, and murder has jumped up by 1.5 percent," says Alfred Blumstein, a criminologist at Carnegie Mellon University who has been tracking crime numbers for 30 years.

The FBI report, which compiled numbers from almost 12,000 police departments, found violent crime was up almost 4 percent from 2005 -- a year which already saw an increase from the year before. Blumstein finds the robbery numbers especially troubling, because they've always served as a warning of what's to come.

"There's clearly a growing number of people who have no future in our economy," Blumstein says. "There are basically three modes of earning income: One is to have a job, the other is welfare. The third is theft."

The last time robbery jumped so dramatically was in the early 1990s, at the height of crack-cocaine use. Criminologists believe drug addiction was behind most of the robberies then. But the crack markets stabilized in the 10 years since, and so has drug use in general.

Blumstein says the problem now is likely the historic numbers of inmates returning home from prison with no job prospects or skills. There's also been a proliferation of handguns in recent years, as well as a growing rise of retaliatory killings in some cities.

Many experts also say that many police departments no longer have the resources to be engaged in community policing. After the attacks of Sept. 11, 2001, police department crime-fighting funds were cut back nationwide. Much of that money went to the Department of Homeland Security, which gave out much smaller grants -- and only for terrorism-related initiatives. The federal budget for crime fighting is now a little more than one-third of what it was 10 years ago.

"Regardless of why crime has gone up, I can tell you what the solution is going to be. It's to pay more attention to the problem and devote more resources to addressing it," says Gene Voegtlin, legislative counsel for the International Association of Chiefs of Police. The group represents thousands of police departments across the country.

The FBI's report did have some positive numbers: Property crime, like burglary and auto theft, dropped 2.6 percent. The numbers for the second half of 2006 will be released next spring.