Accessibility links
A Close Bond Sheds Light on Race Relations High school seniors Amanda Fernandez and Sarah Luzietti have been close friends since ninth grade. Their interracial friendship extends beyond the walls of their school, but they say the world does not always embrace them. 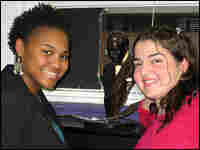 Amanda Fernandez (left) and Sarah Luzietti are seniors at the Duke Ellington School of the Arts in Washington, D.C. Fernandez wants to be an actress; Luzietti aspires to be a professional singer. Neva Grant, NPR hide caption

The 42 million 16- to 25-year-olds in the United States — roughly 14 percent of the population — will have a major impact on American society as they rise into adulthood. In a series of profiles on NPR's Morning Edition and PBS's NewsHour with Jim Lehrer, Judy Woodruff looks at what makes Generation Next different from its predecessors.

Learn More about Generation Next

When Amanda Fernandez met Sarah Luzietti three years ago, she knew right away that there was something special about her fellow ninth grader.

She saw Luzietti under a tree, listening to jazz music. "I knew that white people listened to jazz, but I didn't know that kids my age could appreciate the original black music. She was listening to Ella and she had Miles in there. It was just like, 'Wow, there's something different about her.'"

It was a difference that felt familiar to the girls, who are now both 17 and seniors at the Duke Ellington School of the Arts in Washington, D.C.

It turns out that they had a lot in common -- both are from New York, and both are passionate about the arts. Both their parents split up when they were younger. And to them, all of that seems more important than the fact that Fernandez is black and lives in the inner city and Luzietti is white and lives in the suburbs.

"Honestly, I think adults make more of a stink about race than kids do," Luzietti says. "I've known Amanda too long to feel like I have to walk on eggshells with her.... On the issues of racial equality, I think that we pretty much agree. I feel that I can talk to Amanda about anything."

Fernandez adds, "It's always been a question in the back of my mind, if Sarah can really understand where I come from as a black person.... We're different, but that's not something that gets in the way."

The girls say their closeness outside of school -- they spend a lot of time at each other's homes -- makes their friendship unusual. Sure, at Duke Ellington and other schools, you'll see kids of different races working and socializing together. But Fernandez and Luzietti take their friendship out into the world. Yet they say the world does not always embrace them.

Luzietti says having a black boyfriend often draws unwanted attention, like the time a white police officer who saw them together asked if "everything was OK. Is everything consensual there?"

And Fernandez, an aspiring actress, faces the dilemmas around affirmative action. She says it hurts if people think she's gotten a part because she's black. But she says it doesn't create doubts in her mind about her own abilities.

"I enjoy that sometimes a college will look at me twice because I'm black. Only because it's about time in American society, in America's history that they look at us twice. So, yeah. It's wrong, it steps on other people's toes. But before, I wouldn't have even had an opportunity to learn how to read. I wouldn't have been able to apply."