Accessibility links
'Too Hot to Handel': A Modern 'Messiah' While talking to friends, Marin Alsop realized that Handel's "Messiah" was in dire need of an update. She had already entertained the idea that "Messiah" would lend itself to a 20th-century remake, and once she got inspired about the idea, everything else began to fall into place.

'Too Hot to Handel': A Modern 'Messiah'

'Too Hot to Handel': A Modern 'Messiah'

Listen to a 'Too Hot to Handel' Sampler 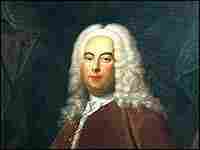 When I was talking to non-musician friends and they said it takes too long to get to the part of Handel's "Messiah" where everyone stands up, I realized that "Messiah" was in dire need of an update.

I had already entertained the idea that "Messiah" would lend itself to a 20th-century remake — I could clearly imagine the "Hallelujah" Chorus becoming a gospel number — and once I got inspired about the idea, everything else began to fall into place.

Handel himself was receptive to singers and instrumentalists adding their own ornamentation and improvisation, and Mozart offered his own updated version of "Messiah," so this concept didn't seem completely off the wall to me. I could hear the recitatives as improvised revival or call-and-response pieces, while the potential for closely harmonized jazz treatments in other numbers seemed almost obvious.

I had to find the right arrangers to tackle this 2 1/2-hour project, so I turned to two wonderful friends and colleagues, Bob Christianson and Gary Anderson. I knew both of them from my studio work as a violinist in New York City, and felt that their dramatically different styles would complement each other while giving the new score the kind of variety and diversity I longed to achieve.

I couldn't have asked for a more committed, gifted team for this project, and I'll never forget our first meeting, in which — after confirming that they were in agreement on the fact that I was out of my mind — we went through every number to determine the new "feel." I wanted to keep the "bones" intact: The melodies, lyrics and form of each number would remain the same. That left the harmonization, the instrumentation and the groove up for grabs.

We talked about the instrumentation. The original is extremely modest and intimate, whereas Too Hot to Handel is anything but modest or intimate. We went from the original instrumentation of strings and a handful of winds to a rocking jazz rhythm section consisting of Hammond B3 organ, gospel piano, drums, electric guitar, Fender bass and acoustic bass, five saxophones, full brass, strings, timpani and percussion.

Then, we needed to find exceptional solo vocalists who could still improvise and scat with the best of them. Fortunately, we found tenor Thomas Young, soprano Lillias White and mezzo Vivian Cherry — creative, inspired artists who can swing like crazy.

Since our first performance at Lincoln Center with the Concordia Orchestra and the Morgan State Choir in 1993, Too Hot to Handel has taken off and become an annual event with orchestras and audiences around the world. The experience is unique and unmatched for me: It's indescribable to be able to attract a diverse audience who is fully into the experience, dancing in the aisles, singing along and enjoying the heck out of the evening together.

In the two years since we recorded Too Hot with the Colorado Symphony, we have sold CDs all over the world, from Guam to Holland. Too Hot to Handel is now a seasonal staple, and for me, it still gives me a thrill to think about audiences jumping out of their seats to groove to Handel's music.

In 2007, Marin Alsop will become music director of the Baltimore Symphony, making her the first woman to head a major American orchestra. She was named a 2005 MacArthur Fellow, the first conductor ever to receive the award.