Accessibility links
Screening Embryos for Disease Jenifer and Angelo Magliocco know much more about spinal muscular atrophy than they ever wanted to. The rare genetic disease killed their first son when he was only 8 weeks old. Before having another child, they used a genetic test to determine if an embryo carried the disease-causing gene. 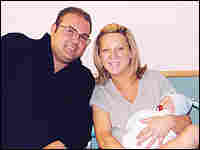 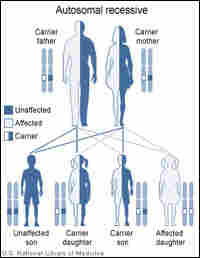 What it is: The motor neuron disease affects voluntary muscles used to swallow, crawl and walk. It is the leading genetic cause of death in infants and toddlers, who either never acquire, or progressively lose, the ability to swallow, stand, sit and move.

Type of mutation: Autosomal recessive. That means both parents need to carry the gene. If both parents carry the SMA gene, there is a 25 percent chance each child will inherit the disorder.

Lifetime Risk: 100 percent. Anyone who has two SMA gene mutations (one from each parent) will have the disorder.

Average Age of Diagnosis: Between 6 months and 2 years. 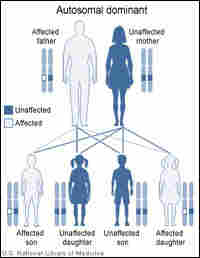 What it is: An inherited gene mutation that affects your risk of developing colon cancer.

Lifetime Risk: 70 percent to 82 percent lifetime risk of developing colorectal cancer, compared with 5 percent risk in the population without the gene.

Average Age of Diagnosis: 45, compared with 60-70 in population without gene.

Jenifer and Angelo Magliocco of Trumbul, Conn., know much more about spinal muscular atrophy than they ever wanted to. The rare genetic disease killed their first son, Angelo James, when he was just 8 weeks old.

As the name suggest, the illness causes muscles to stop functioning. In its most severe form, death comes within weeks of birth.

The Maglioccos wanted to have another child, but they didn't want another one afflicted with the disease. In the past, that might have meant testing a fetus and, if the disease were present, having an abortion. But now there's an alternative: preimplantation genetic diagnosis.

When the Maglioccos learned from their genetic counselor that PGD was available, they decided to try it.

In order to get PGD, the Maglioccos first had to undergo in vitro fertilization.

In November, Jenifer Magliocco started taking drugs that would cause her body to make more than a dozen eggs, rather than the usual one per month.

Just after Thanksgiving, doctors removed her eggs and mixed them with her husband's sperm.

"After three days, they formed embryos which are usually composed of between six and 10 cells," says Wells. "At that point, what you can do is take away just one of those cells from the embryo without causing any significant damage to it."

A single cell from each embryo was sent to Well's lab. The rest remained in an incubator at the fertility clinic.

At the lab, Wells tests the DNA from each embryo to see which has a mutated version of the spinal muscular atrophy gene.

Earlier this month, Wells made his diagnosis. As the Magliocco's waited anxiously in a fertility clinic across town, Wells put the DNA on a gel-like substance that causes the samples to separate into bands.

Peering at the Maglioccos' sample, Wells can see that embryo No. 4 has the mutated gene, and embryo No. 12 also likely has the gene.

"The others look like they're fine," he says. Wells tells the clinic which embryos are safe to transfer. The clinic will transfer two or three of those embryos to Jenifer's womb. The rest will be frozen for future use.

There's no guarantee Jenifer will get pregnant using this technique. But at least she can be certain that if she does, the child won't have the disease that killed her first son.

While many people would agree it's ethical to not implant embryos carrying a gene for a fatal illness, PGD is also being used for more ethically contentious purposes. Consider the case of Chad Kingsbury and his wife, Colby. Chad carries a gene that vastly increases his risk of colon cancer. The gene is rampant in his family, and many of his relatives have died from colon cancer. The Kingsburys wanted children, but were desparate not to saddle them with this genetic blight, so they used PGD to select embryos that didn't have the gene.

But Chad is 33 and still alive. True, he is at risk for colon cancer, but if the disease is caught early, it can be effectively treated. So the embryos the Kingsburys were choosing not to implant could have produced healthy babies, albeit babies with an increased risk of cancer. Some see this as a form or eugenics. Well intentioned, but eugenics all the same.

PGD clearly represents a potentially important tool for preventing disease. But it has also opened some ethical debates.

The Biology of Gene Mutation

Genes are made up of DNA. Each chromosome contains many genes. U.S. National Library of Medicine hide caption

Spinal muscular atrophy is a genetic disease. What does that mean?

A genetic disease is, quite simply, a disease caused by a mutation in a gene. When a gene is damaged, it can mutate. That means that the gene carries a different message to the proteins in the human body. If the new message causes a certain protein to change or to stop working, all of the cells containing that protein will also malfunction. And the result can be a genetic disease.

Most genes come in pairs -- one received from the mother, one from the father. If the child inherits mutated genes, the child can be at risk for a genetic disease.

Here, a primer on various ways genetic disorders can be inherited:

Autosomal Dominant Mutations: This mutation will put someone at risk for the disease if one gene in a pair is mutated.

X-linked Recessive: Mutations on the X chromosome (one of the sex chromosomes) occur more often in males, because they only have one X chromosome. (So if they inherit a copy from either parent, they will have the disorder.) Females must inherit copies from both parents to have the trait, but only need a copy from one parent to carry the trait.