Accessibility links
Bush Takes Different Tack on Iraq, Troop Levels President Bush says he is ready to increase the size of the U.S. military at a White House news conference where he discussed the situation in Iraq. The president said the year has been "a difficult year for our troops and the Iraqi people."

President Bush says he is ready to increase the size of the U.S. military at a White House news conference where he discussed the situation in Iraq. The president said the year has been "a difficult year for our troops and the Iraqi people."

Mr. Bush would not discuss any specifics of what he'll announce when he delivers a speech on a revised Iraq policy promised for January. But he acknowledged that success has not come at the rate he had hoped for.

Still, the president said that he believes the United States will win in Iraq, even as polls show public support for his handling of the war at new lows.

President Bush provided few details of the U.S. strategy for the coming year. "I'm not going to make predictions about what 2007 will look like in Iraq," he said, "except that it's going to require difficult choices and additional sacrifices, because the enemy is merciless and violent." 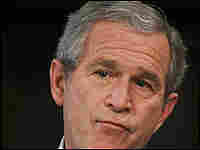 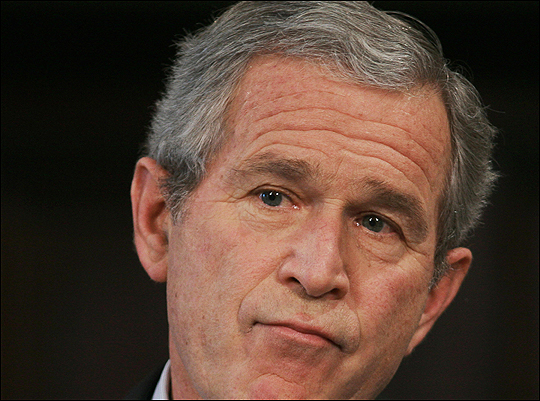 President Bush listens to a question from a reporter at Wednesday's news conference.

Listen to President Bush's complete news conference, along with analysis from NPR.

To download, PC users right-click and select "save target as." Mac users control-click and "save (or download) link as."

President Bush moved to close the books on 2006 Wednesday in a news conference dominated by Iraq and the looming challenge of a Democratic Congress in 2007.

The president was asked whether the U.S. was winning or losing the war that began when he ordered an invasion of that country in March 2003. In an earlier news conference this fall he had said the U.S. was "absolutely winning," but he had contradicted that judgment in an interview with The Washington Post on Tuesday.

The president said his earlier statement meant: "I believe that we're going to win," adding that he still believed that. Explaining his later remarks, he said they "reflected the fact that we're not succeeding nearly as fast as I had wanted."

The president said that 2006 had begun with great hope in Iraq because "12 million Iraqis had gone to the polls" in support of the idea of democracy in that country. But he also noted that attacks by insurgents had prevented the political and economic progress those elections were expected to foster. Some of those attacks, he said, triggered widespread fighting between Sunnis and Shiites, frustrating attempts at to provide "security and stability throughout the country."

The president has been reviewing U.S. policy in Iraq, reading reports from the bipartisan Iraq Study Group, officials from the State Department and Pentagon and various think tanks. One proposed option would send more troops into the most troubled areas of Iraq, including Baghdad. The president would not commit to this course today -- "Nice try," he told the reporter who asked -- but said he is considering it as an option.

This so-called "surge" option would increase the U.S. commitment at a time when polls show most Americans opposed to such a move and eager to have the U.S. troop levels decline. All national polls released this month have shown support for the president's handling of Iraq at all-time lows, sometimes below 30 percent. Most of those polled also say they now think the invasion was a mistake.

Asked if he would favor a surge in troop levels even if U.S. military commanders do not, Mr. Bush called that "a dangerous hypothetical question." He added that more troops would not be the answer unless they had clear goals.

"There's got to be a specific mission that can be accomplished with the addition of more troops before, you know, I agree on that strategy," he said.

That statement seemed to reflect sentiments expressed by General John Abizaid, the top U.S. Army commander in the Middle East, who had announced overnight his voluntary retirement from that command in March. Abizaid has warned that a troop surge might placate targeted areas in the short run but could leave U.S. forces over-extended and less capable in the summer months that would follow.

On a related issue, Mr. Bush did say he favored a long-term enlargement of both the Army and the Marine Corps, an idea his administration had opposed under former Secretary of Defense Donald Rumsfeld. The new Pentagon boss, Robert Gates, was in Baghdad as the president spoke. Gates is conferring with the top military personnel there and has not yet committed himself regarding a surge or regarding the size of the infantry services in the future.

Gates had spent most of 2006 as a member of the Iraq Study Group, a bipartisan group of ten members commissioned by Congress to assess the situation. He left when tapped to become Rumsfeld's successor.

One key recommedation of that group was the opening of direct talks with Iraq's neighbors, Syria and Iran. Responding to a question from NPR, the president said those two countries' current regimes know the price for direct talks with the U.S. and have refused to pay it.

Mr. Bush has said Syria must seal its eastern border with Iraq to prevent the aiding of insurgents there and stop its efforts to undermine the government of its western neighbor, Lebanon. In Iran, the president said, the government knows it must stop trying to enrich uranium for purposes of building a nuclear weapon.

Although questions of war and peace dominated, the end-of-year news conference also gave the president a chance to salute what he called "a pretty substantial two years" of achievement by Congress. He mentioned the energy bill passed in 2005 and changes to Medicare and the extension of certain tax breaks in 2006.

Asked about recent articles rating his presidency poorly when compared to his predecessors, he discounted "short term historians" and said he had noticed that even George Washington's tenure still stirred controversy. He said that meant he should continue to do what he thinks is right and not worry about critics.

The president made a point of promising to talk to Democrats who are taking over on Capitol Hill. He used the phrase "common ground" repeatedly, speaking of potential agreement on a higher minimum wage (if paired with tax cuts for small businesses) and seeing prospects for sweeping change in immigration laws and the management of Social Security.

An overhaul of immigration policy died in 2006 when Republican leaders in the House refused to conference with their counterparts in the Senate to resolve stark differences in their respective versions. Efforts at refinancing Social Security stalled early in the 109th Congress when the president and Republican leaders called for private accounts within Social Security and Democrats refused to consider them. No bill moved in either House or Senate.

Wednesday, however, the president indicated several times that he wanted to work with Democrats.