Accessibility links
Italy, Getty Museum at Odds over Disputed Art The Italian government threatens to break off relations with the Getty museum in Los Angeles in a dispute over a number of Italian antiquities. The Italians are demanding the return of 48 pieces in the museum that they say were taken out of Italy illegally. 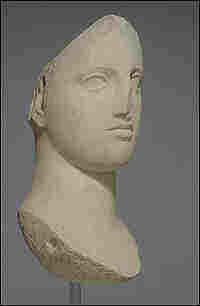 The statue of a goddess -- probably Aphrodite -- is one of two works at the heart of the dispute. J. Paul Getty Museum hide caption

In recent years the Italian government has been trying to secure the return of looted antiquities that were acquired, often illegally, by museums around the world.

One of Italy's major targets in the United States was the J. Paul Getty museum in Los Angeles. The two sides have been talking for many months, but now the Italians say those talks have broken down, and the time for negotiation is over.

In November, after a year of difficult talks over Italy's demand for the return of 52 objects from the Getty, negotiations broke down when the Los Angeles museum offered to return only 26 items.

Most of the works in question can be traced to Italian art dealer Giacomo Medici, who was convicted on smuggling and trafficking charges in 2004.

The two pieces at the heart of the dispute cannot be traced to Medici. Yet Rutelli insisted there is sufficient evidence that they're Italian property.

They are a fifth-century B.C. limestone statue, believed to depict the goddess Aphrodite, and a fourth-century B.C. bronze of a heroic youth. Some scholars have attributed the bronze work to the Greek sculptor Lysippos.

The Getty disputes Italy's claim to some of the objects.

The case is complicated by the ongoing trial in Rome of former Getty curator Marion True, on charges that she conspired with dealers trafficking in stolen Italian antiquities.

And it appears that the 26 items the Getty had hoped to return in exchange for long-term loans of Italian antiquities could now end up as courtroom evidence against the former curator.