Accessibility links
Is a Brighter Earth a Better One? Humans have spent hundreds of years seemingly intent on turning night into day. But a brighter world affects how we sleep, socialize and possibly even our health.

Listen
Is a Brighter Earth a Better One? 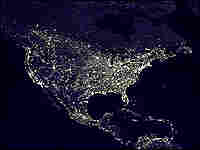 An image of the United States at night, compiled from various satellite views of the Earth. C. Mayhew & R. Simmon (NASA/GSFC) hide caption 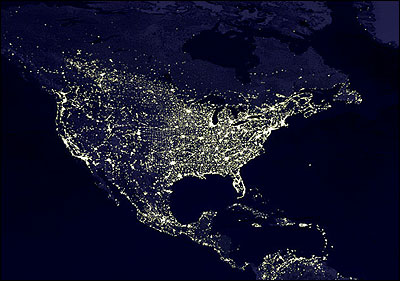 An image of the United States at night, compiled from various satellite views of the Earth.

We've used artificial light to make the world a much brighter place than it used to be. If light were a drug, you might say that humans have become addicted.

But brighter may not be better.

"Darkness oftentimes is viewed as a hindrance," says Roger Ekirch, a historian at Virginia Tech in Blacksburg.

Ekirch, author of At Day's Close: Night in Times Past, says humans have spent hundreds of years seemingly intent on turning night into day.

"The Russian government barely a decade ago tried to launch a giant space mirror which would have reflected the sun's rays," Ekirch says, "transforming night in some portions of Russia into twilight."

And there's an Italian village in the Alps that actually does get extra light from a huge mirror on a nearby mountainside.

Ekirch says all this lighting is taking away something that used to be an important part of human life: the privacy, anonymity and freedom of truly dark nights.

"Milton wrote, 'tis daylight that makes sin,'" Ekirch says. "In other words, one was able to engage in all kinds of activity after dark that ordinarily would not be permitted during the day."

And it wasn't just sex.

Ekirch says that for many Southern slaves, night was the only time they could socialize or travel unsupervised.

"The average person slept for three or four hours, awoke for an hour or more of quiet wakefulness and then returned for a second round of sleep, he says.

That wakeful period provided a time to think, or pray, or ponder dreams while they were still vivid, Ekirch says.

Artificial light also can affect hormones. For example, it can suppress the production of melatonin, which seems to affect both sleep and the immune system.

"There's all kinds of research going on now about the impact of melatonin suppression," says Bob Gent, who is on the board of the International Dark Sky Association, a group that's trying to reduce light pollution.

"What is it doing to the human immune system?" says Gent. "Can this be why women living in bright cities have a higher incidence of breast cancer?"

But Gent says that perhaps the most important thing about darkness is what it allows us see. He remembers growing up in Phoenix in the 1950s, before the city had so many lights.

"You could go in the backyard, look up and just be overwhelmed by the beauty of the night sky," he says. "As a boy I was asking questions like, how many stars are there? How far away are they? What are they made of? Can we visit them?"

Today, Gent lives in the southeast corner of Arizona, in a town called Sierra Vista. He and his wife built their house in a spot that's so dark at night, you can still see the Milky Way.

More on the Winter Solstice