Accessibility links
Intense Light Still Best Treatment for Winter Blues Lack of sunlight throws many people into the deepest of wintertime blues, known as seasonal affective disorder. Researchers have investigated several treatments to get light back into sufferers' lives, but 30 minutes in front of a special light box remains the most proven medicine. 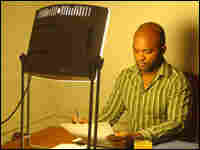 Lack of sunlight throws many people into the deepest of wintertime blues. Andre Pennycooke, 33, a graphic designer, says he first began to notice seasonal depression when he moved from Miami to New York in 1991.

"At first, I thought it was just being away from home," says Pennycooke. His friends were the first to notice something unusual about his blues. They noticed that beginning in October, Pennycooke's mood changed and he became more withdrawn.

Experts say seasonal affective disorder (SAD) starts to kick in for many people in October. Then by late December and January, it's more pronounced. Experts estimate that about 5 percent of adults in the United States have this type of seasonal depression.

To beat his blues, Pennycooke creates his own sunshine. He uses a therapeutic light box to replace what the Earth's winter tilt has stolen away. The model he uses is Uplift Technologies DL930 Day-Light, which has been used in clinical research. Experts recommend a light source that provides a 10,000 "lux" light dosage. The light source in the Uplift Technologies product is delivered at an angle that mimics outdoor light. Pennycooke uses his each morning.

"I sit for 45 minutes to an hour in front of the lights while I'm doing my bills," says Pennycooke. "I'm reading the newspaper, listening to the news, that sort of thing. That's my morning ritual."

Research suggests this sort of light therapy significantly helps more than 50 percent of the people who try it. For those who don't have a half-hour to sit in front of a light box before work, another option is a naturalistic dawn simulation which brings a May sunrise to your bedroom.

With this treatment, a light equipped with a timer is set up in your bedroom. It turns on early in the morning while you're still asleep. Andre Pennycooke tried dawn simulation as part of clinical trial at Columbia University.

Pennycooke had a very dim light turn on at about 5 a.m., a gradual increase in light gently nudges you awake.

Part of the problem with seasonal depression is that people sleep too long. The dawn simulation sends a signal to the brain.

"We're talking about light's input into the base of the brain, where the internal clock gets reset each day," says Michael Terman, director of the Center for Light Treatment and Biological Rhythms at Columbia University. "So you can sleep through it, but your brain is definitely seeing the signal."P>

Pennycooke says that naturalistic dawn simulation did help him wake up, but he prefers the light box. His experience dovetails with research that shows the more intense light therapy works best. Columbia University's Terman thinks using both techniques together might be the best solution for many people.

Terman is also investigating a treatment called negative air ionization to treat people who don't respond to light therapy. A decade ago, the idea was considered wacky.

Pennycooke tried the negative air ionization as part of the study. He says he was skeptical when he learned the treatment was nothing more than a small bedside device that blows a stream of charged ions toward you while you sleep.

"When it clicks on, it makes a nice hissing sound. It's not too loud and it blows a little air. It's not imposing at all," says Pennycooke. This is why he was surprised when he ended up being one of the 48 percent of people in the study who seemed to benefit from negative ions.

In order to figure out whether the positive effect was really from the negative ions, Terman tested two kinds of devices. One device blew low-density ions. The other device delivered high-density ions. None of the participants knew which machine they were using.

This was an important comparison, says psychologist Kelly Rohan of the University of Vermont. She was not involved in the study, but she did review the evidence.

"I think the data are fairly compelling," says Rohan. "As a scientist it's hard to argue with data. So I think there is something to this therapy. I think what's unclear and unknown is exactly how or why it's working."

That lack of any clear mechanism means that -- for good reason -- there will be a lot of skeptics. For now, 30 minutes in front of a light box is still the recommended therapy for seasonal depression.

Rohan advises seeking medical help if you think you might be suffering from seasonal depression.

"Only a qualified professional can accurately evaluate and treat SAD," says Rohan.