Accessibility links
Cooking Up Some Weekend Wonders The biggest weekend wonder is the newly released name of the seventh HP book: 'Harry Potter and the Deathly Hallows.' Wonder what it means? We've got a few hints. We've also got recipes for weekend enjoyment: milk punch, a sumptuous made-in-China movie, a book of fun scientific experiments and a guide to real-life nights at the museum.

Cooking Up Some Weekend Wonders

Cooking Up Some Weekend Wonders

Take out the blue food coloring and paint your tongue. It's one of the cool science experiments from the new book Exploratopia.

Take a look at the new title for J.K. Rowlings' Book 7: Harry Potter and the Deathly Hallows. We'll help you decipher what it could mean.

Take in a romance and scenery in The Painted Veil, a made-in-China movie that remakes a Garbo classic.

Take your pajamas to the museum, where you can spend the night just like in the movies. Just take care not to wake the dinos.

Deathly Hallows Be Thy Name 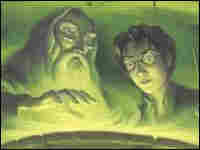 Mugglenet: Name origins, mistakes and weekly editorials may just upgrade you from Muggle to Magician.

The Leaky Cauldron: Chats with Rowling, possible spoilers and on-going movie discussions make this HP site a must for hardcore fans.

Harry Potter Lexicon — The detailed HP encyclopedia contains spells, a quidditch handbook, even a guide to the WWW (Wizardry Who's Who.)

Harry Potter and the Deathly Hallows is the newly announced title for J.K Rowling's final book in the can't-put-em-down series. But the name doesn't exactly make us feel warm and fuzzy inside. Rowling has said that the final Harry Potter book will be the darkest yet, with "more deaths coming." So what does the ominous title portend? Figuring out what might be inside Rowling’s head is harder than doing an Expecto Patronus spell without proper training.

If you're going to spend the weekend deciphering the etymology of the word "hallows," we've come up with some tips to help you out. Start by reading up on King Arthur. In the Holy Grail myth, the Hallows refer to the four objects found in the Holy Grail castle: the spear, the grail, a sword and a platter. Hmm, four objects in the castle -- and four houses in Hogwarts. And we've already seen one sword (Griffyndor's) and one stone (Flamel's) and even a grail-shaped chalice (the Hufflepuff horcrux). And doesn't Dumbledore just remind you a little bit of a guy called Merlin?

If you want to read up further on King Arthur, try T.S. White's The Once and Future King or Marion Zimmer Bradley's The Mysts of Avalon. Or you can visit one of the Harry Potter fan sites we've detailed above.

Of course, these sites don't clear up whether Snape is a self-loathing former Death Eater or still a part of Voldemort's posse. Or whether Ron dies. Or if Harry and Ginny will live happily ever after. But they do provide at least some clues -- maybe(!) -- into what the future for Harry holds. And there are only 180-odd days until we find out.

Melody Joy Kramer, who is spending a year as a Kroc Fellow at NPR, shares her birthday with J.K. Rowling and Harry Potter -- July 31.

You, Too, Can Have a Night at the Museum

Event: Museum sleepovers for a fee.

What It Is: You pay a fee, you are bombarded with educational programs, you get to wander in the dark amid dino skeletons. 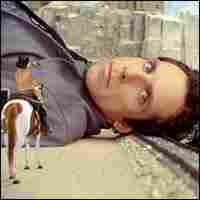 Bad news, kids. In the real world, a lil' guy on a lil' horse will not pay you a visit if you spend the night at a museum. Good news: Your chances of being tied to railroad tracks are nil. Rhythm & Hues/Twentieth Century Fox hide caption

OK. So you took your kids to see A Night at the Museum. As a follow-up, you can actually take them to spend a night at a museum. As it turns out, museums across the country are more than happy to invite kids (and their parents) to sleep with the fossilized fishes.

"There are six lessons in the night, including live animal shows and behind-the-scene tours," says Timshel Purdum of the Academy of Natural Sciences in Philadelphia, which has been letting folks in after closing time for at least 10 years, charging $40 a person. But she admits that the real goal is to "be as fun as possible." (Never fear, parents. Coffee is on hand.)

Here's a sampling of museum sleepovers:

For $79 a person, the American Museum of Natural History in New York lets you wander the Hall of Mammals with a flashlight and sleep beneath the 94-foot-long blue whale.

The Franklin Institute in Philadelphia has an overnight "Spy Camp." Kids are encouraged to hone their sleuthing abilities as they solve a mystery in the museum. On their down time, they can watch an IMAX movie or explore the Giant Heart exhibit. Admission is $39.

The Natural History Museum of Los Angeles County sends kids on a museum-wide scavenger hunt. They can also play with dinosaur fossils -- and maybe even learn a few things about paleontology. The cost is $43.

At the Houston Museum of Natural Science, a group of 30 can pay $2,100 for a customized overnight stay. Activities include "Spooky Science" demos, star shows in the planetarium and late-night strolls through the butterfly center.

Spots tend to fill up months in advance. So sign up early.

"Never has anybody wandered off," Purdum says. "The worst thing that ever happens is someone getting sick. Someone always throws up."

So pick a museum and throw down a sleeping bag. But maybe not under the T. rex -- just in case.

Thomas Pierce, who’s spending a year at NPR as a part of the Joan B. Kroc Fellowship, has wanted to sleep next to a woolly mammoth ever since he did a fifth-grade project on the extinct mammal.

In 'Painted Veil,' China Is Ready for Its Close-Up

What It Is: A made-in-China version of the W. Somerset Maugham novel about a distant doc, his lovely wife and his fight against cholera.

Now Playing: In New York and Los Angeles, with more cities to come on Dec. 29. 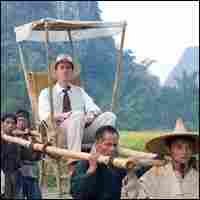 Edward Norton plays a doc in China who would rather study medicine than pay attention to his wife. Lighten up, Ed -- it's Naomi Watts! Painted Veil Productions, LLC hide caption

Every third film you see from China these days seems to feature the Forbidden Palace, but the rest of China is what's really forbidden, especially to foreign filmmakers. The Painted Veil lifts the veil a bit. Where the Greta Garbo version of W. Somerset Maugham's epic about a cholera epidemic was made on Hollywood backlots, the new Ed Norton/Naomi Watts version plunges deep into the heart of China -- the first Western film to do so in decades. It was made by U.S. filmmakers with a Chinese crew and will be exhibited in China as a Chinese film. The story of an emotionally distant doctor and his unfaithful wife is backed by some truly spectacular mountain vistas. The filmmakers set a lengthy sequence in an 800-year-old village that has not been touched by modernity, and Shanghai's colonial district even doubles for 1920s London. Sumptuous and smartly acted, The Painted Veil can be experienced as both a romantic wallow -- and a vivid travelogue.

Paint Your Tongue Blue (In the Name of Science)

Book: 'Exploratopia' by Pat Murphy, Ellen Macalay and the staff of the Exploratorium; illustrated by Jason Gorski.

What It Is: Over 400 do-it-yourself experiments that are fun and — shh, don't tell anyone — educational. 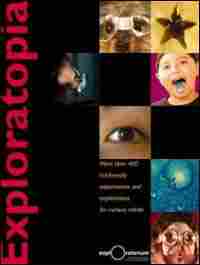 The book has more than 400 ways to apply the scientific method to the use of drinking straws, food color and wineglasses. hide caption

Stuck at home over winter break and looking for family diversions beyond (or, um, from) computer games? Curious minds need look no further than Exploratopia, an engaging collection of do-it-yourself, kid-friendly science experiments that are too much darn fun to be burdened with that old-fogey label "educational."

Whatever age you are, you'll learn tons not just about how the world works, but about how to think -- and explore -- like a scientist, seeking and following the clues to everyday natural puzzles, according to the basic principles of the scientific method. If that sounds stuffy, try painting the tip of your tongue blue with food coloring to find out if you're a sensitive supertaster (the more pink bumps you see, the more sensitive a taster you are). Learn how to make a wineglass sing with the water-and-finger method. (Little known historical fact: Benjamin Franklin was doing something similar when he invented a musical instrument he dubbed the glass harmonica.) Amaze your friends with a host of optical illusions (for basic ingredients, look no further than the kitchen sink, some plastic bottles and a straw).

The 400-or-so experiments in this amply illustrated and highly readable compendium are based on the imaginative, hands-on exhibits at San Francisco's popular science museum, the Exploratorium. The single message they all share is to stop, look and notice all the interesting stuff going on around you.

Diane Cole is a contributing editor of U.S. News & World Report and author of the memoir, After Great Pain: A New Life Emerges.

A Honey of a Milk Drink 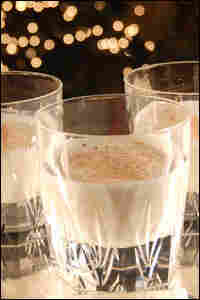 The soothing qualities of milk punch, with its creamy taste and bourbon kick, serve as an easy antidote to holiday stress. Wright Bryan, NPR hide caption 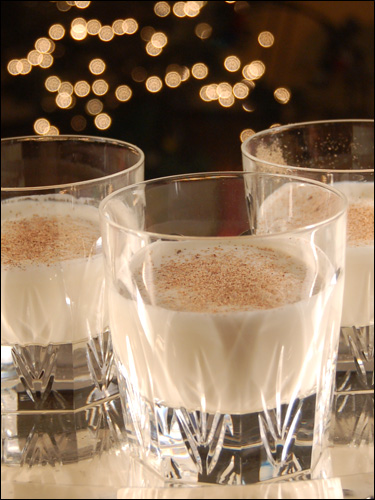 The soothing qualities of milk punch, with its creamy taste and bourbon kick, serve as an easy antidote to holiday stress.

Combine all ingredients in a container. Shake vigorously. Strain into a glass, and dust the foamy top with grated nutmeg.

Variations on the milk punch theme can include the addition of: ice cream, eggs, powdered egg whites, lemons or lemon zest. Like eggnog, the drink can also be made in large batches.

It's the drink of the season in New Orleans, and it's seeping into other corners of the U.S. as well. The sweet drink is made with brandy, bourbon or rum. It goes down easy and packs a big kick.

A relative of the traditional -- and traditionally loathed -- eggnog, milk punch is a versatile and altogether-more-fun drink that is consumed year-round by those in the know. Its history is thought to date back to England in the 1800s, although its origins are elusive. Today, milk punch is commonly associated with New Orleans, and with breakfast or brunch. The cognoscenti use it as a morning-after alternative to the Bloody Mary.

Milk punch is an ideal drink for the holiday season, when you might start imbibing earlier than is commonly accepted. But please, don't put it on your cereal! And keep it away from the kids -- the milk masks the alcohol's hard edge, making it a tempting drink for the younger set.

New Orleans restaurants often feature this beverage: It goes for $9 at Acadiana, a trendy Louisiana eatery in Washington, D.C. But you can easily whip up a batch at home. The basics are milk, heavy cream, alcohol, confectioners' sugar, vanilla and ice. A sprinkle of freshly shaved nutmeg on the frothy top adds a spicy rejoinder to the creamy drink below.

It takes some experimenting to get the drink right, which is part of the fun. You can, and should, adjust the proportions of ingredients until you're satisfied with the taste. Drink up!

Wright Bryan, a producer for npr.org, consumed mass quantities of milk punch to research this article. 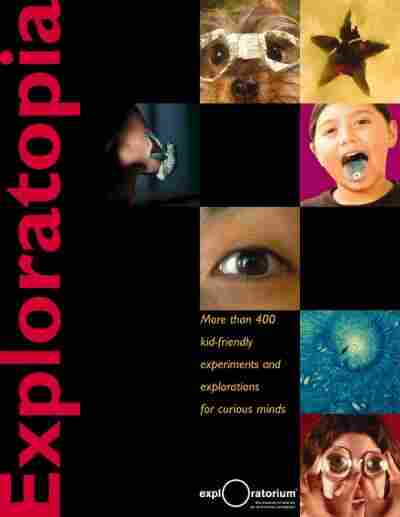