Accessibility links
The Palestinian Faction Fatah: A Primer Founded in the late 1950s, Fatah was the first exile group to launch attacks against Israel. It lost its majority in the Palestinian Parliament to Hamas in 2006, but Fatah still controls the presidency, the highest elected position in the government. Here, a guide to Fatah's history and leaders.

The Palestinian Faction Fatah: A Primer

The Palestinian Faction Fatah: A Primer 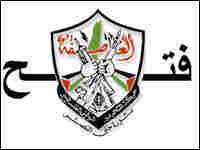 The official Fatah emblem depicts two fists holding rifles, with a hand grenade in between. In the background is a map of Israel and the occuppied territories. hide caption

Founded in the late 1950s, Fatah was the first exile group to launch attacks against Israel. It lost its majority in the Palestinian Parliament to Hamas in 2006, but Fatah still controls the presidency, the highest elected position in the government. Here, a guide to Fatah's history and leaders:

Origins: Founded by Yasser Arafat and a small group of Palestinian nationalists in the late 1950s, Fatah was the first exile group to launch attacks against Israel.

The PLO was initially based largely in Jordan. But after fighting between PLO guerrillas and the Jordanian army in 1970 (a conflict known as Black September), the PLO was forced out of Jordan. Most of the guerrillas — and Yasser Arafat — settled in Lebanon. The PLO then launched frequent attacks on Israel from their Lebanese bases, prompting two Israeli invasions of Lebanon (in 1978 and 1982).

In 1993 the PLO officially renounced terrorism and recognized Israel's right to exist. In exchange, PLO leaders were allowed to return from exile in Tunisia and recognized as the Palestinian Authority, the governing body of the Gaza Strip and parts of the West Bank. They were also allowed to set up Palestinian security forces. Although the PLO has officially renounced terrorism, some of its member organizations have been accused of or claimed responsibility for continued attacks.

Election: On Jan. 25, 2006, Fatah lost its majority in the Palestinian Parliament to Hamas. Fatah still controls the presidency, the highest elected position in the government, as well as roughly 70,000 police and security forces throughout the West Bank and Gaza Strip. These forces regularly clash with Hamas loyalists.

On the Ground: Despite its violent past, Fatah is now seen as the more moderate Palestinian party. But Fatah's leadership of the Palestinian Authority was seen by many Palestinians as corrupt and incompetent.

Abbas is viewed as a moderate Palestinian politician that lacks the charisma of Yasser Arafat.

Marwan Barghouti: Barghouti is Fatah's most popular leader in the West Bank. Born in Ramallah in the late 1950s, Barghouti became active in Fatah at the age of 15. By age 18, he had spent time in an Israeli prison.

Barghouti was one of the major leaders of the first intifada, the Palestinian uprising that began in 1987. He was subsequently arrested and deported, though he was allowed to return in 1994. Soon after, Barghouti was elected to the Palestinian parliament, where he pushed for peace with Israel.

Barghouti was also a key leader of the second intifada, which began in 2000. He was arrested, tried and convicted in Israel of multiple murders and is now serving five life sentences in an Israeli jail. Barghouti's supporters deny his involvement and say he is being held as a political prisoner.

Mohammed Dahlan: Dahlan is one of the most powerful Fatah leaders in the Gaza Strip. Born in 1961 in a Palestinian refugee camp, Dahlan served several prison terms in Israel for terrorist activities. He is believed to have been one of the leaders of the 1987 intifada.

Dahlan says he was jailed 10 times by Israel between 1981 and 1986. During his incarcerations, he learned to speak fluent Hebrew.