Accessibility links
Stallone, O'Toole Age Well in New Films In Rocky Balboa and Venus, veteran film stars Sylvester Stallone and Peter O'Toole give spry performances as the durable boxer and an aging actor who becomes involved in the life of a young woman. 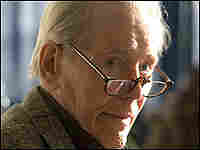 Peter O'Toole plays an aging actor with an eye for a 19-year-old woman in 'Venus.' Miramax hide caption 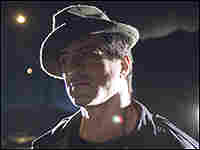 Peter O'Toole and Sylvester Stallone may not seem to have much in common. But this week, they're opening films that strike remarkably similar chords: O'Toole finding one last love as an over-the-hill actor in Venus, and Stallone returning to the ring as an over-the-hill boxer in Rocky Balboa

I know, I know, you're thinking, oh please, not Rocky again. I was thinking that too. And, a desiccated, wizened old Peter O'Toole isn't really what I was looking to see at Christmastime either. But in their dotage, it turns out these two old pros will surprise you.

By which I mean that in Rocky Balboa, you expect Sylvester Stallone to be beaten down physically. That's what that tongue-in-cheek, training montage is all about. But he's also beaten down emotionally this time, a has-been who has retold his same-old-same-old story so often that everyone he tells it to knows the punch-line, as it were. And in that, Rocky's not unlike the 60-year-old actor who plays him, trying to keep up with younger stars, knowing he's become a kind of punch-line himself.

This sad-eyed, mumbling mug -- by which I mean both Rocky and Stallone -- can still be endearing when he's down, much as we forget that when he's puffed up. And the same-old-same-old story he's telling can be, too, when outfitted, as it is here, with a couple of new wrinkles for the aging baby boomer in all of us.

As for Peter O'Toole, he's crammed a lot of living into his 74 years, and these days, he looks it. So much so, that in Venus, when you see him on a hospital gurney in an operating room early on, you'll be as worried as the folks gathered around him.

Happily, when an onscreen director yells "cut," you realize it's just a scene in a TV show. O'Toole's playing Maurice, a once-distinguished actor, who now mostly gets cast as a corpse on TV. He's still pretty spry though, particularly when it comes to the ladies. They no longer look at him, but when one of his ancient actor buddies has a 19-year-old niece show up to take care of him, Maurice definitely has an eye for her.

She's a bit of a lump, more interested in watching TV and drinking up all the liquor in the house than in actually taking care of her Uncle Ian. Maurice asks what she wants to do now that she's in London and she says she'd like to be a model. He gets her a job as a nude model for an art class he's hoping to... um, audit, let's say, which is not quite what she had in mind. His attentions appall her, actually. But when his health starts to flag, she finds ways to give him a little of what he wants.

O'Toole is pretty marvelous in Venus, raunchy and charming in about equal measure, and he's surrounded by the sort of actors that the Brits have the good sense not to throw on the trash heap when they get on in years: Leslie Phillips from the old Carry On comedies, portly Richard Griffiths and Vanessa Redgrave as Maurice's ex-wife.

Redgrave's presence reminds you not just of the physical beauty that she and O'Toole had when they were young, but also of the reason that they stood out from the rest of the young cinematic beauties. Their scenes together are elegance itself -- his laugh, her dawning realization that their discussions have all been about mortality. They're gorgeous together, just gorgeous. And when he says to her "We won't live forever," you realize what a great reason that is for seeing them now.