Accessibility links
Autonomy, Oil Money Underlie Kurdish Goals in Iraq Iraq's Kurdish leaders, once fierce rivals, have been working together to achieve autonomy for their oil-rich northern region. But, for now, Jalal Talabani and Massoud Barzani realize they must work under a central Iraqi government. 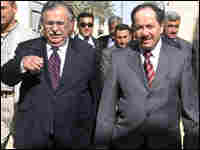 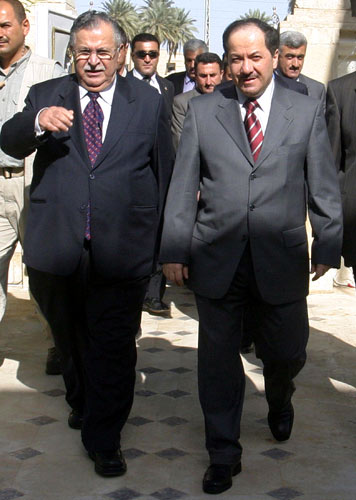 One group crucial to the future of Iraq is the Kurds. They live mainly in the northern part of the country, known as Iraqi Kurdistan. For decades, Kurds fought for independence from Saddam Hussein's government and paid harshly for it. Under Saddam's rule, a series of military campaigns and ethnic cleansing against the Kurds took place in the 1980s, including the use of chemical weapons on civilian populations.

For years, Talabani and Barzani were fierce rivals. After the 1991 Gulf War, the United States put in place a "no-fly" zone in Northern Iraq, covering much of Iraqi Kurdistan. As a result, the Kurds were mostly protected from Saddam — but not from each other. In essence, the PUK and KDP fought a civil war during the 1990s which only ended in 1998, when the United States brokered a peace deal.

The ultimate goal of both men is an independent Kurdistan. But they realize that, for now, they must work within a federal structure under a central Iraqi government. There are Kurdish populations in Turkey, Iran and Syria and all of those governments fear separatist movements of their own if an independent Kurdistan is formed. Turkey has long fought a brutal campaign against Kurdish separatists of the Kurdish Workers Party, known as the PKK. And on occasion, Iranian forces shell Kurdish separatists based near the Iraq-Iran border.

The two men are working for as much autonomy from the central government as they can get, which so far has been considerable. Iraqi Arabs must have passports to travel to Kurdistan; the official language is Kurdish, not Arabic; and the Iraqi flag has been taken down in many places, replaced with the Kurdish flag.

Even as they work within a federal structure, a crisis may emerge in Kirkuk, a city that has historically been an ethnic mix of Kurds, Arabs and Turkmen. Saddam attempted to "Arabize" the area during the 1970s and '80s, forcing Kurds from their homes, and importing Arabs. Talabani and Barzani see Kirkuk as the capital of Kurdistan, for historic reasons and because the city sits astride the largest proven oil reserves in Iraq.

The Kurdish government is attempting to reverse Saddam's ethnic program with one of its own, forcing Arabs out and forcing Kurdish families who lived there in the past to abandon their new lives and move to a very dangerous city. Unlike Kurdistan, which is fairly peaceful, Kirkuk has become a hot spot for attacks by various Iraqi factions.

A referendum on the future of Kirkuk is expected in the next year. In a move that enraged both Talabani and Barzani, the Iraq Study Group, a bipartisan U.S. panel that made recommendations to the White House and Congress on Iraq strategy, called for the referendum to be delayed. The study group also recommended a stronger central government which would control oil revenue; the Kurds desperately want to retain control over that money.

The Kurds have worked well with both the Shiite-led government and the United States so far. Many Shiites want a similar autonomous region in southern Iraq, where they are the vast majority, and they have supported Kurdish autonomy. The United States has relied on the Kurds to maintain peace in their areas, and to supply the Iraqi army with members of their militia, known as the Peshmerga.

But the future of Kirkuk and control of oil revenues may become serious crises among the Kurds, the United States and the central government. And as Iraqi Kurdistan moves ever farther away from the rest of Iraq, maintaining a federal system may become ever more difficult.