Accessibility links
Terrorists Manipulate 'Dark Web' to Spread Jihad A new report finds that no one may be using more advanced Web techniques than terrorists, and they may be doing it even better than the U.S. government.

A new report finds that no one may be using more advanced Web techniques than terrorists, and they may be doing it even better than the U.S. government. 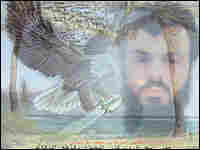 A Web screenshot depicting the slain terrorist leader Abu Zarqawi. The caption says "Emir Zarqawi, may God save him. Eagle of Iraq, volcano of Jihand, and the beheader." International Journal of Human-Computer Studies hide caption

And from insurgents on TV to terrorists on the Internet. A new report says terrorists have become adept at using the Web. They may be doing better than the U.S. government. Our tech contributor, Xeni Jardin, has more.

JARDIN: And in their report analyzing terror campaigns on the Internet, the team of technology and culture experts from three U.S. universities compared extremists Web sites to about the same number of U.S. government Web sites, and it became clear that the government's Web sites lagged far behind in more-advanced use of video, audio, chat rooms and message boards.

Dr. XIAO LUNG CHIN(ph) (Associate Professor, University of Massachusetts): The terrorists are at least as good as the U.S. governments in terms of utilizing the Internet technologies to actually do propaganda and attract people to their groups.

JARDIN: Web data-mining researcher Dr. Xiao Lung Chin is associate professor at the University of Massachusetts. He led the group of six researchers, who evaluated three characteristics for each Web site. First, contact richness, meaning how much material, and in what formats. Second, how well does the group communicate and interact with supporters? And third, how much does the site use more advanced technologies.

Across the board, researchers found the terrorists scored as well or better than the U.S. government. Does that mean the American government is losing a war of Web sites against anti-American groups? Not exactly, says Chin.

Dr. CHIN: Actually, the government is doing a pretty good job in terms of utilizing the Internet, it's just that the terrorists, they are learning very fast. They are taking advantage of all the new technologies including, you know, the Internet.

JARDIN: One example: Terror groups use the Internet to make untraceable phone calls with Voice Over IP. Also, a significant portion of all this activity takes place on Web servers hosted inside the United States. It seems in many cases, terrorists are using the same popular Web services as the rest of us.

So should the U.S. government be doing more to shut down that online activity?

Mr. JAMES ELLIS (Research and Program Director, Memorial Institute for the Prevention of Terrorism): When you shut down a site, it doesn't go away. That community doesn't go away.

JARDIN: James Ellis is research and program director for the Oklahoma City-based Memorial Institute for the Prevention of Terrorism. It's a non-profit agency funded by the Department of Homeland Security to expand knowledge of terrorism to prevent attacks.

Mr. ELLIS: Sometimes, it's more helpful to leave a site intact so you can continue to monitor it, infiltrate it, understand it and be able to watch it over time.

JARDIN: Ellis says much of the material on the dark Web is aimed at recruitment or external propaganda. These sites are also used to pump up internal morale, not unlike U.S. Web sites.

Mr. ELLIS: Doing violence to other human beings is not a natural instinct, and it takes time and indoctrination to be able to carry it out, certainly in a ruthless fashion. So adopting some of these electronic means is part of the increasing sophistication of terrorists.

JARDIN: All of this online activity could end up being a valuable ongoing source of what experts called open-source intelligence, information that's not classified, but right out there in the public domain. And the ability to look at that could be important in understanding the roots of terrorism.

JARDIN: Now that the government has ID'd the sites, Dr. Chin and his team say the next step is new, more efficient monitoring systems; and since so much of the material is not in English, better automated language translation technologies, too.

CHADWICK: And you can see the full report that Xeni mentioned, and images from some of these terrorist Web sites at our site, npr.org.