Accessibility links
All the Joy the World Contains Jimmie Dale Gilmore says years of hard living caused him to hurt himself and others. But hitting bottom inspired the musician to believe that concern for others is the best way to find peace in himself.

Listen
All the Joy the World Contains 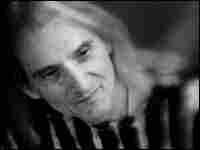 The question of belief has always been a source of confusion for me. Most of my life I have been torn between a deep longing for certainty and an equally deep skepticism. At times the ability to convince myself of vast, unprovable notions was kind of soothing, but the relief was usually short-lived. The truce with pessimism-bordering-on- nihilism was a very tenuous one. My outer life mirrored this conflict as I went from one extreme to another -- sometimes aspiring to mystical otherworldliness and other times living in the nightlife music world not far removed from the criminal.

I did my best to cultivate belief but could only come up with what Alan Watts once called a "belief in belief." The real thing remained elusive. Brief glimpses of beautiful, inspirational meaning would slowly fade into boredom or sorrow at the state of the world -- and even cynicism. It came as a great shock to discover that my real spiritual problem was not a product of the world's condition, but of my own self-centeredness.

I caused hurt and sorrow to those closest to me by living my life with my own gratification as the guiding principle. The old cliche that experience is the best teacher proved itself to me with a vengeance. For some of us, it seems, experience is the only teacher. I had to learn the hard way.

I went through a few years of just getting lost and more lost. The drugs, the sex, the alcohol: It sounds like a lot of fun -- that is, if you don't figure in the remorseful hangovers, the depression or the loneliness that is both the cause and the effect of the whole vicious circle. I went far enough down to have to either change or die. I basically managed to break my own heart.

But people are capable of learning, and learning that I had no wisdom on my own finally opened the way for me to learn from those who did. I was given a second chance. I found that what I once considered empty platitudes are actually descriptions of fact. Jesus said, "It is better to give than to receive." I now know that to be the case, not by faith but by experience. I finally discovered the beautiful, paradoxical truth that genuine concern for the welfare of others is the gateway to the only real satisfaction for myself. I cannot claim to consistently live up to this ideal, but it is with genuine gratitude that I can say I have come to believe the words of the Indian philosopher-poet Shantideva: