Accessibility links
Poachers Target African Elephant for Ivory Tusks As the market for ivory continues to grow, anti-poaching groups struggle to stop the escalating black-market trade. Officials in Asia and Africa seized at least 20 tons of elephant ivory smuggled into their countries this year. 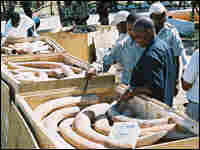 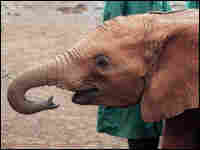 An infant elephant orphaned by ivory poachers. Some tusks recovered last year from adult elephants were as much as 6 feet long. Bill Clark hide caption

Hong Kong (May) — Customs officials found five tons of ivory hidden behind a false wall in the bottom of a metal shipping crate. When the Cameroon-based crate was first opened, it appeared to contain a shipment of plywood. The false wall was discovered when the crate was loaded onto the back of a track and driven through a giant X-ray machine. Traces of drugs were found inside the hidden compartment, suggesting that the crate had also been used to ship several kinds of contraband.

Taipei (June) — Customs officials working at Taiwan's biggest shipping companny found several tons of ivory inside big, wooden boxes labeled "sisal fiber." Smuggling experts say that as many as 400 elephants were killed. Most of the tusks, which were covered with bloodstains and bits of flesh, had been cut off of full-grown elephants, according to The Taipei Times. Shipping records showed that the tusks were being shipped from Tanzania to the Philippines.

Shanghai (August) — Chinese officials announced that they found 3.6 tons of ivory inside a 20-foot container intercepted at Shanghai's Waigaoqiao shipping port. The seizure, which was described as the largest in mainland China's history, produced 303 whole tusks and 408 additional tusk pieces inside a container originating from Kenya, according to the Environment News Service. Customs officials reportedly X-rayed the crate after finding inconsistencies in the ship's manifest. Kenyan officials said the tusks were probably taken from elephants killed outside of Kenya and then smuggled into the country for transport.

Manila (September) — Crates containing parts of at least 200 elephant tusks were stolen from a warehouse in the Philippines. The tusks had been moved to the warehouse after being seized from a container labeled "household goods" by Manila customs officials. According to a report in The Manila Standard, the container had been packed in Zambia. The tusks have not been recovered.

At least 20 tons of ivory were smuggled into African and Asian countries this year by poachers, almost doubling the amount seized in previous years. The large cache worries anti-poaching experts trying to protect the African elephant from extinction.

Allen Crawford, who tracks ivory poaching for the wildlife monitoring group Traffic, says large busts were more common this year than in his previous years of tracking.

"It's been horrible," Crawford says. "We are talking about seizures of ivory -- six tons and five tons and two tons and three tons -- on a fairly consistent basis. That has never happened before and we didn't see it coming this year."

He describes one bust that took place in China after a cargo ship arrived from Cameroon. The bust revealed a huge cache of elephant tusks behind a false metal wall.

"I wish I could show you a picture of that X-ray," he says. "You could see the pointed tips of the tusks curving out of the ends of the pile."

After custom agents brought in welders to remove the false wall, they found five tons of elephant ivory tucked inside. The tusks were cut from the faces of several hundred dead African elephants.

Major ivory busts also took place this year in Taiwan, Singapore, Kenya, India, Japan and the Philippines, says Crawford. Several of the biggest ivory-smuggling operations turned up inside crates. Shipping records show that some of those crates were used repeatedly before their cache of illegal ivory was discovered.

Though estimates of how much ivory was seized this year range from 20 tons to more than 24 tons, some smuggling experts think the real haul may have been much larger.

Wildlife consultant William Clark says that it's well known that governments in some parts of Asia and Africa don't like to talk about ivory poaching because it's embarrassing.

"As a result," says Clark, "we don't know whether the reports we read about in media reflect the ivory that's been seized. I tend to think otherwise."

Clark, who has tracked ivory smuggling since the 1970s, says the trade dried up in 1989 when countries agreed to a worldwide ban on ivory sales. Ten years ago, however, a period of economic growth in Asia helped revitalize the trade. Rising demand for ivory has driven the price from $200 per kilo in 2005 to more than $700 per kilo this year.

"You don't have to be a Ph.D. to understand that there's a huge amount of money to be made in smuggling," Clark says. "It's a hot market and lots of people are getting into it."

Anti-poaching experts say it's still not clear where all this ivory is coming from. One possibility is that it's coming out of basements and storage rooms owned by poachers who were waiting for prices to rise.

Another possibility is that an unseen poaching crisis is now raging in central Africa, where dense forests make it hard to find the carcasses needed to quantify the carnage. Anecdotal evidence of such a poaching crisis has been gathered by Mike Fay, an elephant expert with the Wildlife Conservation Society and an Explorer in Residence with the National Geographic Society.

While flying over a clearing in Chad recently, Fay looked down and saw a group of well-armed men.

"We circled back to take a picture and I see this guy pointing his AK-47 at the airplane and shooting at us," says Fay. " Over the next four days, we came cross three or four elephant-massacre sites, where groups of roughly 20 elephants were piled up with their tusks cut off and none of the meat [had been] taken."

The U.S. Fish and Wildlife Service tries to train and equip local park rangers with the proper equipment to fight poachers. But it's not an easy battle. Even in a record year for seizures, customs officers say they find just 10 percent of the ivory they're looking for. If that was true in 2006, it means that at least 180 tons of tusks were smuggled out of Africa.