Accessibility links
'Stand-In Moms' Warm Hearts, Fill Stomachs For a modest fee, an enterprising woman will cook a week's worth of food for Indian immigrants in the U.S. -- sometimes based on a faraway mother's own recipes. 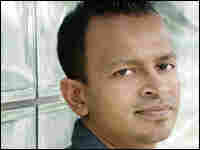 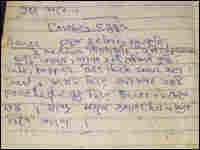 Roy's notebook is 15 years old, worn, faded and oil-stained. The book is all in Bengali, even the recipe for "Cowboy Eggs." Sandip Roy hide caption 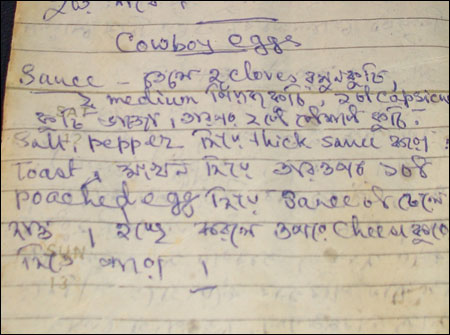 Roy's notebook is 15 years old, worn, faded and oil-stained. The book is all in Bengali, even the recipe for "Cowboy Eggs."

Many immigrants pine for a taste of home -- those hard-to-find special spices, the familiar vegetables. And when the immigrants are young men who left their mothers thousands of miles away, the problem is even more critical.

Many of them barely know how to boil an egg, let alone fix an ethnic feast. That's the plight that faced thousands of young Indian men who moved to the United States during the high-tech boom of the '90s. They were lucky if there was a local all-you-can-eat Indian buffet, though the dining experience was more heartburn than heartwarming.

In Silicon Valley, where I arrived 15 years ago as a cooking-challenged immigrant from India, finding someone who could supply good home-cooked food was a lead more precious than a tip about the next big IPO.

But now, a new niche has opened up in the immigrant economy -- a sort of mom for hire. For a modest fee, an enterprising Indian woman will come to the home and cook up a week's worth of food, sometimes based on the far-away mother's own recipes.

At one time, these cooks-for-hire relied on word-of-mouth to find jobs. Now they are advertising online on bulletin boards like Sulekha.com, a sort of Craigslist for the Indian community. Young families increasingly use their services, as well.

Of course, it means the boys still don't learn to cook. But at least their mothers sleep easier in India knowing their sons aren't surviving on frozen dinners doctored with mango pickles.