Accessibility links
Residents Unite to Save Concrete Animal Park Two generations of children in the Los Angeles suburb of San Gabriel have played in a park featuring concrete structures built to look like animals. As the city remodels, some locals are organizing to save Ozzie the Octopus, Stella the Starfish and others. 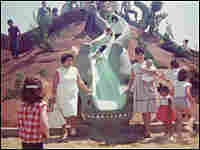 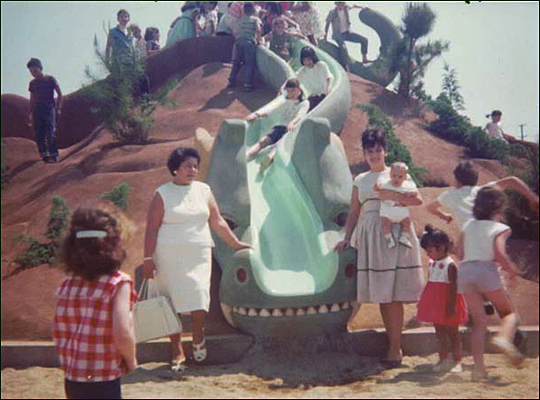 Parents and children play in La Laguna Park in San Gabriel, Calif., on opening day, May 16, 1965.

In the Los Angeles suburb of San Gabriel, a controversy has arisen over the fate of a park playground filled with concrete monsters. Plans to remodel the unique park have been met with some organized resistance.

Laguna de San Gabriel, also known as Monster Park, was built by an uncredited cement artist named Benjamin Dominguez in 1965. It was considered cutting edge when it first opened, but now it strikes some as a potential safety hazard that might better serve the community as an athletic field. Others see it as a masterpiece.

History professor Eloy Zarate has organized a community movement to save Monster Park, his childhood playground.

"This is no longer about my memories, this is about Benjamin Dominguez -- he finished this place when he was 70," Zarate says.

Dominguez built the cement tiger caves at the Mexico City Zoo, and a series of -- now mostly demolished -- creature parks throughout the Western United States. La Laguna is one of the last survivors in Dominquez's body of work.

Friends of La Laguna presented a petition of more than 2,000 signatures at a San Gabriel City Council meeting. Deputy mayor Steve Preston thanked Zarate for bringing La Laguna's rich history to the city's attention, and assured the crowd that renovation plans for the park were still only in the early design stages.

But later, Rebecca Perez, head of San Gabriel's Parks and Recreation department, explained that even though the city is now committed to working with the Friends of La Laguna, the cement creatures' ultimate fate will be determined by safety codes.

"I used to play on merry-go-rounds when I was a kid, but you can't have merry-go-rounds anymore. All those things that were fun and great when we were kids, have gone now," Perez says.