Accessibility links
Online Campaign Sparks Interest in New Disease A vigorous online lobbying campaign has made a disturbing disease a priority for the Centers for Disease Control. Patients from California, Texas and Florida describe symptoms including rashes and sores, and the sensation of things crawling under their skin. Many sufferers believe they have something called Morgellons disease.

A disturbing disease is getting increased attention from the Centers for Disease Control. Patients from California, Texas and Florida describe symptoms including rashes and sores, and the sensation of things crawling under their skin. Many sufferers believe they have something called Morgellons disease. A vigorous online lobbying campaign has made it a CDC priority. 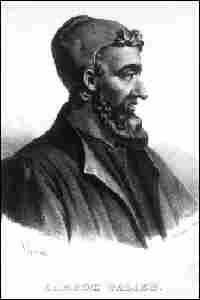 The definition of disease can drastically shift from era to era, or even from year to year. Female hysteria, for example, seemed a very real illness to 18th- and 19th-century physicians but has since vanished from medical books. Other ailments, like Lyme disease and chronic fatigue syndrome, are now considered bonafide diagnoses -- although that wasn't always the case.

Here are just a few of the many ailments that have been added, dropped or reclassified over the years:

Humoral Imbalance -- Second century doctor Galen popularized the ancient notion that the health of every human is controlled by a mix of four bodily fluids: blood, yellow bile, black bile and phlegm. An imbalance of these humors, Galen said, was behind every illness. Recommended treatment included bleeding a patient until the humors were restored.

Irritable Heart -- Both combat and non-combat Civil War soldiers were diagnosed with this condition, which shared some symptoms with modern-day post-traumatic stress disorder. Doctors believed civilians also suffered from the illness; an unidentified infectious agent was said to be the cause. Symptoms included shortness of breath, palpitations, burning chest pain, headache, dizziness, diarrhea and sleep problems.

Female Hysteria -- This diagnosis was used to explain any of a number of symptoms in women, including shortness of breath, insomnia, muscle spasms and irritability. First used by ancient Greek doctors, the term persisted as a psychological diagnosis until 1952, when the American Psychological Association dropped it.

Neurasthenia -- First characterized in 1869, this condition combined a variety of symptoms -- fatigue, anxiety, headache, depression and overexertion -- in another grab-bag diagnosis. Doctors believed that the affliction mainly affected "extremely civilized people," and that symptoms were due to the ever-increasing speed of modern life. Shortly after World War I, the disease fell out of vogue.

Lyme Disease -- This illness got its name in 1985 from a cluster of cases that occurred in Lyme, Conn., a decade earlier. Doctors first thought the patients had a form of juvenile rheumatoid arthritis, but subsequent sleuthing revealed that the bite of a tick transmitted the bacterial illness to humans. The illness can produce a variety of symptoms, including skin rashes, arthritis and various neurological components; if caught early, it can be easily treated with antibiotics.

Chronic Fatigue Syndrome -- This illness, first medically defined by a Centers for Disease Control and Prevention task force in the1980s, described patients who experience severe fatigue not relieved by sleep or rest. Since then, the definition has been amended to say that such fatigue must last at least six months. In addition, patients must have four or more other symptoms, which include severe short-term memory problems, multijoint pain with swelling or redness, post-exercise fatigue, a sore throat and enlarged lymph nodes. The underlying cause of the illness has not yet been pinned down.