Accessibility links
Alaska's Governor Is Tough, Young — and a Woman Sarah Palin made history in November when she was elected governor of Alaska. Palin is the first woman to win the office, and, at the age of 42, will be the youngest governor in the state's history.

Listen
Alaska's Governor Is Tough, Young — and a Woman

Sarah Palin made history in November when she was elected governor of Alaska.

Palin is the first woman to win the office, and, at the age of 42, will be the youngest governor in the state's history.

She's also a moose-burger-eating, snow-mobile-riding maverick who's not afraid to take on fellow Republicans she disagrees with.

2 new women were elected in the Senate: Claire McCaskill, in Missouri and Amy Klobuchar in Minnesota, bringing the total to 16.

Of the 12 Senate women running for seats, 8 were Democrats.

139 female candidates ran for seats in the U.S. House.

10 new women were elected in the House.

57 women incumbents were re-elected in the House. 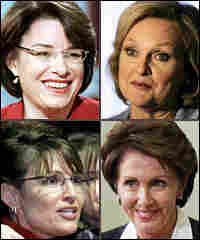 Record numbers of women will be serving in the 110th Congress, and the U.S. House of Representatives will be led by a woman speaker for the first time in history. Nine governors will be women. There will be 16 female senators, including two new ones, and at least 70 women will be in the House.

The most important win for women is the speakership of the House of Representatives. Next year, Nancy Pelosi (D-CA) will be the first woman to lead the Congress.

Robin Gerber is a historian and author of Leadership, the Eleanor Roosevelt Way. She says Pelosi's position of power is important for all women.

"The power of the mirror is huge. What we see, we believe we can become," Gerber says. "And so that’s why Nancy Pelosi's sitting in that speaker's chair is huge. For women, that is definitely the most significant thing that happened.”

On the night of the election, preparing to step into her new role, Nancy Pelosi spoke about the role of clean government.

"The American people voted to restore integrity and honesty in Washington D.C.," she said. "And the Democrats intend to lead the most honest, most open, and most ethical Congress in history."

Cleaning the house; the domestic image is almost irresistible.

Gerber says that raising a family is the kind of leadership that women like Pelosi bring to elective office, and men often do not.

"She had five children before she came into politics. And that old 'four cookies, five children' problem is a similar problem that she’s going to have to solve as speaker," Gerber says.

But does this change things?

Vivian Eveloff, director of the Sue Shear Institute for Women in Public Life at the University of Missouri, says that even conservative voters regard women as an antidote to corruption. That created opportunities this year for women -- like Missouri's Senator-elect, Claire McCaskill. Before her win, women in Missouri ran five times and lost.

“All of those efforts to break down that door, in fact, perhaps loosened it up enough that Claire McCaskill was ultimately able to break it down and get through," Eveloff says. "Maybe it does -- in a state like Missouri -- take a lot of efforts before you can finally achieve this goal."

Minnesota had never elected a woman to the Senate until Tuesday, when voters selected Democrat Amy Klobuchar to represent them in the 110th Congress. The first woman to serve in the House from Minnesota was Coya Knutson. Her husband famously wrote her a letter that read, "Coya, come home."

"And they gave it to the newspaper and that was the end of her," Klobuchar says. "My husband pledged he would never write such a letter."

Klobuchar brings another quality voters say they admire about women, especially this year: They get things done.

"They know me as a prosecutor for the biggest county in Minnesota -- as the elected prosecutor," Klobuchar says. "And they knew that I got results, and that I focused a lot on results in my job. We had 10 debates. And what happened was the people who hadn’t voted for women before were able to see that I could be tough. I could take this guy on. And I was going to be looking out for them."

Klobuchar says the women in the Senate helped with her campaign, and that she and Claire McCaskill strategized and raised money together. Voters, especially women voters, recognize that kind of cooperation in women candidates.

So with Pelosi as House Speaker promising new civility, and with new women in Congress, is this the year of the woman?

"Oh, I so don’t like that expression," Eveloff says. "I think every year ought to be the year of the woman until we get a Congress, and we get legislators, and we get statehouses that reflect the diversity of this country. We've made a little progress this year. But we certainly have a long way to go."

Robin Gerber says just wait for "the year of the woman running for president" -- which could be 2008.