Accessibility links
Boston Mayor Wants to Move City Hall The mayor of Boston wants to sell City Hall and the area around it -- a barren plaza with the distinction of being voted "the worst public space in the world." Mayor Thomas Menino is thinking about moving to a remote site on the South Boston waterfront, but others say City Hall should stay in the center of town.

The mayor of Boston wants to sell City Hall and the area around it — a barren plaza with the distinction of being voted "the worst public space in the world." Mayor Thomas Menino is thinking about moving to a remote site on the South Boston waterfront, but others say City Hall should stay in the center of town. 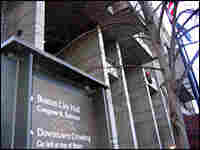 And I am Melissa Block.

The world is full of unfortunate architecture. But out of all of it, city hall plaza in Boston has the distinction of being voted the worst public space in the world by a group that ranks these things. The 11-acre plaza around city hall is a barren windswept wasteland of brick and concrete. And many think the building itself is an eyesore.

As NPR's Chris Arnold reports, the mayor of Boston is now talking about selling it and starting over.

CHRIS ARNOLD: I'm here at city hall in Boston. And if you've never seen this building, it's difficult to describe exactly. It's in a part of town where you've got the Union Oyster House and Samuel Hall and these early American taverns on one side of the street, and they've got a modest brick architecture from olden days. And then, across the street, you've got this just colossal concrete structure that is city hall. The word monstrosity is really not overstating it.

ARNOLD: Thirty-six-year-old Angel Vasquez volunteers in city hall with the seniors program. He and others think that 100-foot high concrete columns the building sits on make it look like an alien spacecraft with its landing gear down.

VASQUEZ: Somebody must have been tripping.

ARNOLD: The mayor of Boston is not a big fan of this building either.

THOMAS MENINO: Well, it's a cement bunker. That's what it really is, a bunker.

ARNOLD: Mayor Thomas Menino is sitting in his office, which like all the other rooms in this building is pretty dreary, with lots of dark, exposed concrete.

MENINO: It's cold and the atmosphere - in just the walls. And then the walls, they're 12-feet thick, all cement.

ARNOLD: And even in your office here, I mean, yeah, that the walls, the ceiling's like, what? Forty-feet-high. And these concrete walls, it feels like you're in a bunker.

MENINO: Well, this would be a great handball court. You know, if you've ever played handball. The ceilings are high enough. The walls are there.

ARNOLD: A lot of the rooms in this 1960s modernist building have high ceilings like this. Once city counselor says the heating bills blow your hair back, and the layout, like an Escher painting, is a bit of a maze. Mayor Monino.

ARNOLD: So the mayor wants to sell off the plaza and this building, maybe as it teardown. He figures he'd raise a few hundred million dollars from private developers, and with that the city could build a new city hall away from downtown on a south Boston waterfront. But some don't think city hall should move.

FREND KENT: It is regressive and inappropriate for the whole citizenry of Boston.

ARNOLD: Fred Kent is the founder and president of the Project for Public Spaces, the group that ranked city hall plaza as the worst public space in the world. He's okay with tearing down the building, but he says a new city hall should stay where the old one is. It's where four subway lines intersect right in the center of town. He says the waterfront site is far too remote, and some people don't even want to replace the current building.

BILL MITCHELL: It is intensely worrying, because I think Boston could be on the verge of making an enormous mistake.

ARNOLD: Bill Mitchell is a professor and former dean of MIT School of Architecture and Planning. He's outside looking up that city hall.

MITCHELL: I'm a fan of this building, I always have been. Well, it have a kind on muscular strength and integrity. It has - it's a great building of its era. And buildings go through cycles of fashion, and you know, this kind of architecture is intensely unfashionable at this point. But that's precisely when you have to be careful about preservation.

ARNOLD: But Mitchell doesn't have to work here. John Tobin is a Boston city counselor.

JOHN TOBIN: I'm not an architect, but I am in favor of giving everybody an hour to get their belongings, get out of here and blow the place up.

ARNOLD: Tobin says in addition to the heavy, dark, depressing interior, the air inside is often dry or stagnant. City workers have signed petitions complaining about it. None of the windows open. And one night, a couple of years ago in the city council room -

TOBIN: Thank God nobody was in the chamber, but - it was 60 pound piece of the ceiling. It was like something out of Skylab came crushing down and hit my desk. And you know, we had to close the chamber for a month and a half after that.

ARNOLD: That's because of all the asbestos that came down with the ceiling. Tobin agrees with Fred Kent. He'd like to see a new city hall built here around the current site along with the redevelopment of the area around it. He says that could bring in more shops and businesses and create a bustling city hall plaza to be proud of.