Accessibility links
'Tis the Season for Hangovers! The medical term for a hangover is "veisalgia." It means, roughly, "the pain that follows debauchery." A look at why it happens and what your best bets are for a cure.

Listen
'Tis the Season for Hangovers! 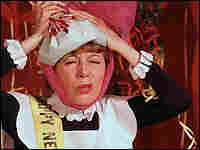 What does a hangover look like? Comic actress Imogene Coca gives her impression. Bettmann/Corbis hide caption

The medical term for a hangover is "veisalgia." It means, roughly, "the pain that follows debauchery." Understandably, some people don't like to own up to it.

But at a holiday party in Boston, Charlie Evett admits he's had a few hangovers, with the familiar list of symptoms.

"I usually have a very bad headache and I feel very tired. So, sort of shaky," Evett says. "Very fragile, unable to move quickly. As though prematurely aged. As though I need a walker but I don't have one handy. "

Dr. Robert Swift, a professor of psychiatry and human behavior at Brown University, says there are three theories.

"The first theory is that hangover is a type of alcohol withdrawal," Swift says.

After only a few hours of drinking-to-excess, your body goes through the same experience as alcoholics when they stop drinking. That may be surprising, but Swift says it's because alcohol sedates the brain. To compensate, the body puts out chemicals that excite the brain. They're still around the next morning.

"You're left with the increased excitability for a period of time and then it takes a while for that to go away," Swift says. That explains the jitters, sensitivity to light and sound, and your racing pulse.

The second theory of hangover involves a type of chemical -- called congeners -- found in many alcoholic drinks, especially darker-colored ones. The most evil is a type of alcohol called methanol. The liver breaks down methanol into formaldehyde.

"Formaldehyde is embalming fluid," Swift says. "And when this gets into your blood it makes people feel … uncomfortable. It may contribute to the headache and some of the toxic symptoms of hangover."

So when people say they're pickled, they're right.

The third theory is that the main type of alcohol in beverages, called ethanol, is the culprit.

Alcohol is an irritant to the gastrointestinal tract, Swift says, as well as being a dehydrant; it dials down a hormone that causes the body to retain water.

"It also can disrupt biological rhythms, in essence producing a kind of jetlag," he adds.

So which theory is right?

"I think they're actually all operative, which is why there's no one cure," Swift says.

There are a lot of stories about what works, like this one from Marylene Altieri of Watertown, Mass.

"I was at a lovely dinner with friends at a very beautiful country restaurant outside of Geneva, Switzerland. And our host was ordering champagnes and wines in a continual succession," Altieri recalls. "So I just kept drinking and drinking and eating wonderful food and feeling very happy."

As her hostess put her to bed, she gave Altieri her favorite remedy. "She said, 'Take these two pills, drink this tea, drink this water and you'll be fine in the morning.' And I was. I was totally without hangover the next morning," Altieri says.

The pills and tea contained silymarin, also known as milk thistle. Some recent research suggests it protects the liver, at least in people with acute hepatitis.

But before you buy milk thistle pills or try any of the dozens of hangover remedies, keep in mind that there's almost no rigorous research behind any of them.

Here's what's known to work: Eat while you imbibe. Pace your drinking -- your liver can keep up with one drink an hour. Alternate alcohol with water and fruit juice. If you take a painkiller before bed, stay away from products like Tylenol -- it has an ingredient that's toxic to the liver in combination with alcohol. Use a long-acting drug such as Aleve.

Here's to a cheery and pain-free morning-after!