Accessibility links
New Year's Resolutions: If Will Power Isn't Enough Making -- and breaking -- New Year's resolutions is an ancient human tradition. And if will power isn't enough, you could get extra help from psychotherapy. But which kind? The answer lies in whether you would rather talk about your childhood, or write out a shopping list. 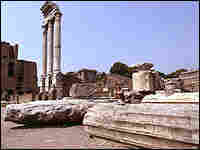 Ancient Romans made resolutions -- and perhaps, like us, they failed to keep them. Maybe that's why Rome fell. Reuters/Corbis hide caption

Ancient Romans — they were just like us! The earliest reliable records of resolutions are in Roman writings from around 180 A.D., says anthropologist Douglas Raybeck of Hamilton College. Planning ahead and trying to change things is uniquely human, he explains. Romans wanted to get along better with neighbors, help the poor and improve their bodies. (Sounds familiar?) No records indicating the strength of Roman will power. But in at least one case, a tattletale said his neighbor failed to keep his vow to reduce drinking.

If you'd like to break the pattern, a psychotherapist would be glad to help.

Michael Houston is a psychoanalyst in Washington, D.C. What would he do to help a patient who resolves to lose weight? "I'd probably start with how they're feeling about themselves and their current weight," he says. "Then I want to look more at how their weight problem developed."

The search could go back to childhood or adolescence, and the change would come with several days a week of therapy over several years. And that would be just one part of an effort to fully understand oneself.

Cognitive behavioral therapy deals with just a single behavior at a time. For obesity, research shows 10 weekly sessions can lead to permanent weight loss. The goal is to help people develop new habits, says Judith Beck, director of the Institute for Cognitive Research in suburban Philadelphia.

Take a woman who wants to lose 50 pounds by April. That's not realistic, says Beck. The first step is to scale down her expectations, and understand that weight loss needs to be slow and steady.

"Another thing she's going to have to do is learn some specific skills," says Beck, such as tolerating hunger pangs and planning meals. Follow-up with the therapist is important, too.

You can see the difference between psychoanalysis and cognitive therapy by looking at someone who binges on Oreo cookies. A cognitive behavioral therapist would tell the patient not to keep them on the counter, or not to buy them in the first place. Psychoanalyst Michael Houston, though, is going to go farther.

"I'm going to ask how did they start," he says. He'll take them back as far into their youth as they want to go.

Houston and Beck agree that failure to stick to a resolution does not mean you are a failure.

"It's important to prepare yourself in advance, and give yourself credit for trying things," Beck says.

Beck is going to try to exercise more this year. She's made that resolution before, but this year she's going to block out time in her calendar for the gym.

Houston, who once kept a resolution to run a marathon, is vowing to lose weight and occasionally eat oatmeal for breakfast.

And me? I'm going to clean my desk, and keep it clean. Really, I will!