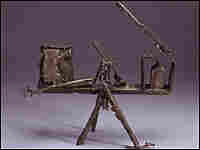 John T. Scott's Reliquaries, created in 2000, was among the sculptures stolen from a New Orleans warehouse. Courtesy of the Arthur Roger Gallery hide caption

It was another case of "industrial looting," when thieves strip copper, brass or other scrap metals from buildings and sell it. Scott's world-renowned artwork normally draws thousands of dollars per piece, but these sculptures likely were sold as scrap metal for just a few hundred dollars.

John Scott is in hospital in Houston, recovering from a second lung transplant.

Ron Bechet, who shares the studio space with Scott, walked in on the scene Tuesday morning. He talks with Noah Adams about the stolen sculptures.