Accessibility links
Merce Cunningham: Dance at the Edge Considered by many the greatest living choreographer, Merce Cunningham's career began with Martha Graham and spans 60 years of innovations in dance and music. At 87, Cunningham is still creating new works and he remains on the leading edge of dance. 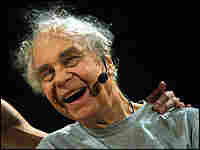 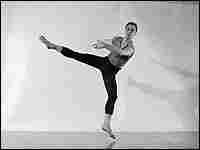 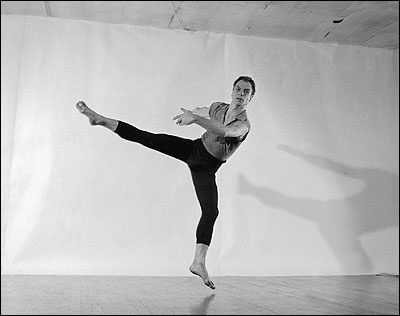 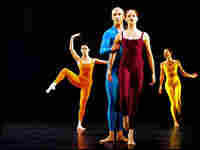 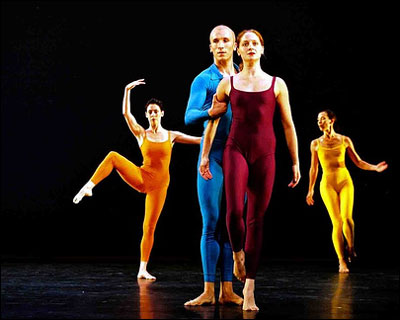 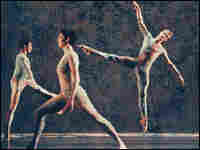 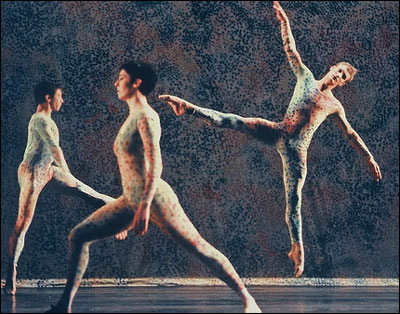 A scene from a recent performance by the Merce Cunningham Dance Company.

Considered by many the greatest living choreographer, Merce Cunningham's career began with Martha Graham and spans 60 years of innovations in dance and music. At 87, Merce Cunningham is still creating new works, and he remains on the leading edge of dance.

The choreographer says he sees all movement as dance: a man stepping off a curb, a woman jiggling her foot impatiently, a bird arching its bony shoulders.

He still leads a busy dance company, housed on a bustling street in Greenwich Village. He makes a few concessions to age, but only a few. He uses a wheelchair sometimes and sits on a stool to teach. But his dancers say his fluid gestures still convey the movement he wants.

"I'm sitting down and I have a bar like a dance bar in front of me and then I indicate the tempo and try to show the steps," Cunningham says. "Then the pianist plays tunes that I remember from when I could play the piano years ago and in the meantime I’m tapping my feet, so I’m doing tap-dancing."

Cunningham demands the impossible of his dancers and students. He began his career at the top in the 1930s, dancing on a Broadway stage, opposite the towering figure of modern dance: Martha Graham. Then he started his own company, and walked away from everything dance had been about: storytelling, lavish costumes and even the way the dancers followed the music.

With his life partner, experimental composer John Cage, he came up with a way to incorporate chance into the creative process. He would use the Chinese method of divination, the I Ching, to decide the order in which dancers should make certain steps.

"Things come up that one could say were physically impossible," Cunningham says, "but I always try them and in the act of doing, I find out something I didn’t know."

For instance, Cunningham says, take three movements: a run, a jump and a fall. Tossing a coin would tell you what movement to do first. Such random choreography breaks down a dancer's muscle memory of what steps normally follow other steps.

Cunningham demands a lot of audiences, too. Often when he collaborated with John Cage, Cunningham would create a dance and Cage would compose the music -- separately. Cunningham made no attempt to fit the dancers' movements to the music. Sometimes the performance was the first time they heard the music.

"Given a certain length of time, let’s say 10 minutes, I could make a dance which would take up 10 minutes and John Cage could make a piece of music that occupied the same amount of time, and we could put them together," Cage recalls.

"When Cage would play the piece, there would be moments when in the other way of working, I would have thought there should be a sound, but his sound would come perhaps just after what I had done. And it was like opening your mind again to another possibility. As John Cage said once, 'He does what he does, and I do what I do and for your convenience, we put it together.' I thought that was a remarkable way of thinking about it."

In his collaboration with Cage, Cunningham danced as gracefully as ever, but dance could be anything: He might also ride a rickety bicycle across the stage while Cage lectured on Zen Buddhism. He had another set of collaborators: His sets and backdrops were created by many well-known visual artists of the day, such as Jasper Johns, Robert Rauschenberg and Andy Warhol.

"In my dance work, I very rarely saw dancers, except the people with whom I worked directly, naturally," Cunningham says. "I don’t think I ever had a conversation with someone say from the Graham company or from the New York City Ballet about dancing -- because if I brought up my ideas, they were not shocked, they just didn’t comprehend this sense of possibility."

Cunningham once said, "I think of dancing as being movement, any kind of movement. And that it is as accurate and impermanent as breathing."

With that definition in mind, he says as long as he's living, he'll be dancing.

"I can call it dancing, even if nobody else does," Cunningham says.