Accessibility links
Harlem Says Its Farewell to James Brown A horse-drawn carriage carried the body of music legend James Brown through the streets of Harlem on Thursday to the world-famous Apollo Theater, where a sea of people waited to say farewell to the man known as the "Godfather of Soul." Brown died Christmas Day at the age of 73. He was to play in New York on New Year's Eve. 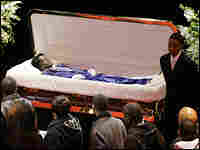 Music legend James Brown's body is displayed at the Apollo Theater in Harlem, N.Y., where he made his 1956 debut. hide caption 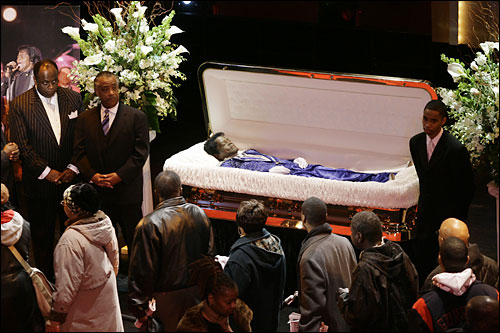 Rev. Al Sharpton, 2nd left, stands alongside the body of James Brown on display to the public at the Apollo Theater in New York, Thursday, Dec. 28, 2006.

A horse-drawn carriage carried the body of music legend James Brown through the streets of Harlem on Thursday to the world-famous Apollo Theater, where a sea of people waited to say farewell to the man known as the "Godfather of Soul."

Brown died Christmas Day at the age of 73. He was to play in New York on New Year's Eve. 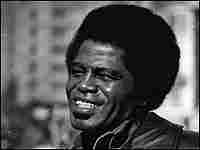 James Brown, before the pompadour, but firmly entrenched as the "Godfather of Soul." The photo is from 1971. Evening Standard/Hulton Archives hide caption 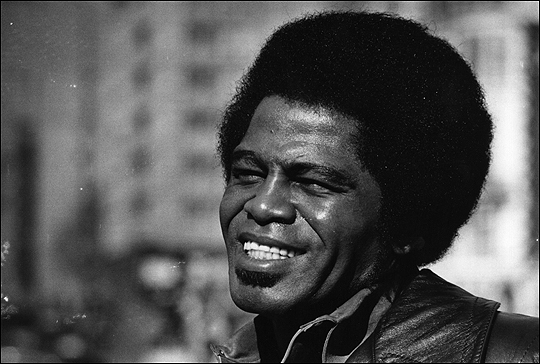 James Brown, before the pompadour, but firmly entrenched as the "Godfather of Soul." The photo is from 1971. 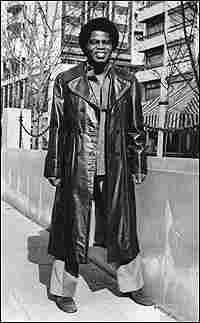 At 38, Brown had won a Grammy for "Papa's Got a Brand New Bag." He would win another for "Living in America," and a third for lifetime achievement. Evening Standard/Hulton Archives hide caption

At 38, Brown had won a Grammy for "Papa's Got a Brand New Bag." He would win another for "Living in America," and a third for lifetime achievement.

Brown was hospitalized with pneumonia at Emory Crawford Long Hospital on Sunday and died of heart failure around 1:45 a.m. Monday, said his agent, Frank Copsidas of Intrigue Music.

He initially seemed fine at the hospital and even told people that he planned to be on stage in New York on New Year's Eve, Copsidas said.

Brown was one of the major musical influences of the past 50 years. From Mick Jagger to Michael Jackson, David Bowie to Public Enemy, Brown's rapid-footed dancing, hard-charging beats and heartfelt yet often unintelligible vocals changed the musical landscape. He was to rhythm and dance music what Bob Dylan was to lyrics.

"He was an innovator, he was an emancipator, he was an originator. Rap music, all that stuff came from James Brown," entertainer Little Richard, a longtime friend of Brown's, told MSNBC.

"James Brown changed music," said Rev. Al Sharpton, who toured with him in the 1970s and imitates his hairstyle to this day.

"He made soul music a world music," Sharpton said. "What James Brown was to music in terms of soul and hip-hop, rap, all of that, is what Bach was to classical music. This is a guy who literally changed the music industry. He put everybody on a different beat, a different style of music. He pioneered it."

He won a Grammy for lifetime achievement in 1992, as well as Grammys in 1965 for "Papa's Got a Brand New Bag" (best R&B recording) and for "Living In America" in 1987 (best R&B vocal performance, male.) He was one of the initial artists inducted into the Rock and Roll Hall of Fame in 1986, along with Elvis Presley, Chuck Berry and other founding fathers.

Brown, who lived in Beech Island, S.C., near the Georgia line, triumphed despite a turbulent personal life and charges of abusing drugs and alcohol. After a widely publicized, drug-fueled confrontation with police in 1988 that ended in an interstate car chase, Brown spent more than two years in prison for aggravated assault and failing to stop for a police officer.

From the 1950s, when Brown had his first R&B hit, "Please, Please, Please" in 1956, through the mid-1970s, Brown went on a frenzy of cross-country tours, concerts and new songs. He earned the nickname "The Hardest Working Man in Show Business" and often tried to prove it to his fans, said Jay Ross, his lawyer of 15 years.

Brown's stage act was as memorable, and as imitated, as his records, with his twirls and spins and flowing cape, his repeated faints to the floor at the end as band members tried in vain to get him to leave the stage.

His "Live at The Apollo" in 1962 is widely considered one of the greatest concert records ever. And he often talked of the 1964 concert in which organizers made the mistake of having the Rolling Stones, not him, close the bill. He would remember a terrified Mick Jagger waiting offstage, chain smoking, as Brown pulled off his matchless show.

"To this day, there has been no one near as funky. No one's coming even close," rapper Chuck D of Public Enemy once told the AP.

Brown routinely lost two or three pounds each time he performed and kept his furious concert schedule in his later years even as he fought prostate cancer, Ross said.

With his tight pants, shimmering feet, eye makeup and outrageous hair, Brown set the stage for younger stars such as Michael Jackson and Prince. And the early rap generation overwhelmingly sampled his music and voice as they laid the foundation of hip-hop culture.

Born in poverty in Barnwell, S.C., in 1933, Brown was abandoned as a 4 year old to the care of relatives and friends. He grew up on the streets of Augusta, Ga., in an "ill-repute area," as he once called it, where he learned how to hustle to survive.

"I wanted to be somebody," Brown said.

By the eighth grade in 1949, Brown had served 3 1/2 years in Alto Reform School near Toccoa, Ga., for breaking into cars. While there, he met Bobby Byrd, whose family took Brown into their home.

Byrd also took Brown into his group, the Gospel Starlighters. Soon they changed their name to the Famous Flames and their style to hard R&B.

In January 1956, King Records of Cincinnati signed the group, and four months later "Please, Please, Please" was in the R&B Top Ten.

Pete Allman, a radio personality in Las Vegas who had been friends with Brown for 15 years, credited Brown with jump-starting his career and motivating him personally and professionally.

"He was a very positive person. There was no question he was the hardest working man in show business," Allman said. "I remember Mr. Brown as someone who always motivated me, got me reading the Bible."

While most of Brown's life was glitz and glitter -- he was the manic preacher in 1980's The Blues Brothers -- he was plagued with charges of abusing drugs and alcohol and of hitting his third wife, Adrienne.

In September 1988, Brown, high on PCP and carrying a shotgun, entered an insurance seminar next to his Augusta office. Police said he asked seminar participants if they were using his private restroom. Police chased Brown for a half-hour from Augusta into South Carolina and back to Georgia. The chase ended when police shot out the tires of his truck.

Brown received a six-year prison sentence. He spent 15 months in a South Carolina prison and 10 months in a work release program before being paroled in February 1991. In 2003, the South Carolina parole board granted him a pardon for his crimes in that state.

Soon after his release, Brown was on stage again with an audience that included millions of cable television viewers nationwide who watched the three-hour, pay-per-view concert at Wiltern Theatre in Los Angeles.

Adrienne Brown died in 1996 in Los Angeles at age 47. She took PCP and several prescription drugs while she had a bad heart and was weak from cosmetic surgery two days earlier, the coroner said.

More recently, he married his fourth wife, Tomi Raye Hynie, one of his backup singers. The couple had a son, James Jr.

Two years later, Brown spent a week in a private Columbia hospital, recovering from what his agent said was dependency on painkillers. Brown's attorney, Albert "Buddy" Dallas, said the singer was exhausted from six years of road shows.

Brown was performing to the end, and giving back to his community.

Three days before his death, he joined volunteers at his annual toy giveaway in Augusta, and he planned to perform on New Year's Eve at B.B. King Blues Club in New York.

"He was dramatic to the end -- dying on Christmas Day," said the Rev. Jesse Jackson, a friend of Brown's since 1955. "Almost a dramatic, poetic moment. He'll be all over the news all over the world today. He would have it no other way."

All news is bad news. Or so the saying goes. Many Brits firmly believe this — and use it as a branch to beat their journalists, one of the more despised species in these isles.