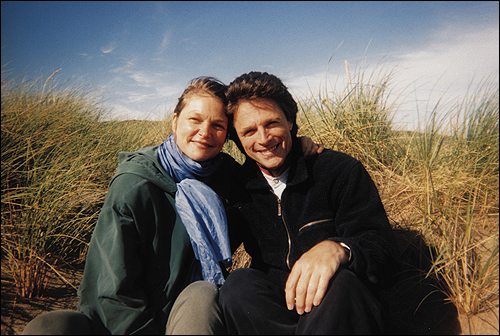 Peter Lieberson and Lorraine Hunt Lieberson. "It wasn't the trained voice so much that impressed me," Peter Lieberson says of his late wife. "It was the soul behind it."

"I chose the poems because they moved in a certain kind of emotional way that I felt had a kind of feeling of a journey," Peter Lieberson says. 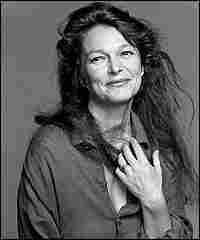 Lorraine Hunt Lieberson died of cancer in July. She was 52. hide caption

When Lorraine Hunt Lieberson died of cancer last July, at the age of 52, the classical music world mourned the premature loss of a singular talent. Her rich voice and intense stage presence were widely admired and praised by critics and audiences, alike.

In her final year, Lieberson cancelled most of her engagements, but she did sing several performances of an orchestral song cycle called Neruda Songs which her husband, Peter Lieberson, composed for her. They've been preserved on CD.

Even before Peter Lieberson met Lorraine Hunt, he heard a recording of her. He says he got the chills hearing her sing.

"I realized it was a kind of force that I was listening to," he said recently. "It wasn't the trained voice so much that impressed me... it was the soul behind it."

Lieberson and Lorraine Hunt worked together on his opera, Ashoka's Dream, in Santa Fe, N.M., during the summer of 1997. They fell in love. During that time, Lieberson came across a book with a shocking pink cover in the Albuquerque airport and picked it up — 100 love sonnets by the Chilean poet Pablo Neruda.

"They were so passionate and beautiful and the words were words that I would've spoken to Lorraine," Lieberson recalled. "And thought, immediately, on the spot, that I must set these — at some point — for Lorraine."

It took Lieberson several years, but with a co-commission from the Los Angeles and Boston symphonies, he chose five of the poems. Each represents a different phase of love, from first blush to final parting.

Remarkably, he did not consult with his wife as he was writing them, presenting them as a fait accompli.

"We'd been together a while, so he was really tuned into my voice," Lorraine Hunt Lieberson told NPR in 2004. "And so I didn't really have to say much at all about what he written for me. He was right on, as far as range and technical ease of the vocal lines."

James Levine, who conducted the premiere of Neruda Songs in Boston in November 2005, calls them "a kind of miracle."

"We didn't have any idea that we would lose Lorraine so soon," Levine says. "But Peter could hardly have written a more appropriate piece, in every respect — to her talent, to her artistry, to her emotion and intelligence and everything that she had — which was really extraordinary."

The musical language of Neruda Songs is lush and romantic. "And now you're mine," goes the English translation of the fourth song. "Rest with your dream in my dream."

"Peter, who has written a great many thorny pieces early on, somehow was inspired to another kind of music in this piece," Levine says. "These songs, I think, fall in the category of very great and very accessible, which is a combination almost as rare as the opposite."

"There is a dimension to these songs which is especially moving and almost too much to take, at times," Alex Ross, music critic for The New Yorker, says. "Because it is about the love between two people and about the impermanence of love."

The final song, he notes, begins [again, in English translation], "My love, if I die and you don't..."

"He urges the lover not to mourn his or her passing," Ross points out. "And the music — the tranquility of the music — sort of sends that message."

"We had a very short time together," Peter Lieberson says of his wife. "In some sense, we only had nine years. But, in many other ways, it was very full, because we were together almost continuously. And, after I heard these pieces and the way she sang them, there was a sense of completion. A sense that I finally had done what I really wanted to do and I was able to express my love for Lorraine in music."

Peter Lieberson's interview for this story was conducted from a hospital in Houston, where he is undergoing treatment for lymphoma.

'New Yorker' Profile of the Liebersons