Accessibility links
Iraq Executes Saddam; Challenges Remain Former Iraqi dictator Saddam Hussein has been executed, according to Iraqi state television and other media outlets. Saddam had been sentenced to death for the killing of 148 people who were detained after an attempt to assassinate him in the northern Iraqi city of Dujail in 1982. 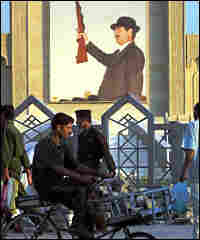 Saddam's death brings a final end to an era in which his image, and personality, dominated Iraq. Here, an Iraqi man cycles past a picture of then-President Saddam Hussein holding a rifle in Baghdad in September of 2002. Ramzi Haidar/AFP/Getty Images hide caption

Among the experts in this news special:

Former Iraqi dictator Saddam Hussein has been executed. Saddam had been sentenced to death for the killing of 148 people who were detained after an attempt to assassinate him in the northern Iraqi city of Dujail in 1982.

An Iraqi official told the Associated Press Friday that those cleared to attend the execution included a Muslim cleric, lawmakers, senior officials and relatives of victims of Saddam's brutal rule.

Born in Tikrit, Saddam was 69 years old. He ruled Iraq from 1979 to 2003. U.S. and Iraqi forces were on high alert for a possible surge in violence across Iraq. Speculation had swirled all day about whether Saddam had or had not been handed over from U.S. to Iraqi custody -- a move expected to be the final step before his execution.

Saddam had been in U.S. custody since December 2003, when he was found by U.S. forces hiding in a spider hole.

Many in Iraq cheered the arrival of the execution in the pre-dawn hours of Saturday by firing guns into the air, although some said they would not believe it until they saw it with their own eyes. Iraqi officials had said they would film the hanging, presumably to show to the Iraqi people.

Many Kurds criticized the timing of the execution, calling it a miscarriage of justice: Saddam was still on trial for atrocities and genocide against the Kurds in northern Iraq between 1987 and 1988.

The Kurd-related trial was adjourned until Jan. 8; experts say the trial of Saddam's co-defendants likely will still go on.

Saddam Hussein began to assert control of the Iraqi government in 1979, and his brutal reign lasted until the U.S. invasion of 2003.