Accessibility links
Science Finds One Use for Fruitcake: Blow It Up! Not sure what to do with Grandma's leftover fruitcake? Professor Thom Castonguay has an idea. In a lab at the University of Maryland's Department of Nutrition and Food Science, Castonguay demonstrates bomb calorimetry -- the science of calculating calories by blowing up food.

Listen
Science Finds One Use for Fruitcake: Blow It Up! 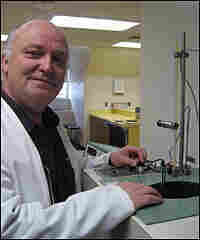 Professor Thom Castonguay at the University of Maryland shows off his bomb calorimeter. Scroll down to read more about the science of calorie measurement. Adeline Goss, NPR hide caption

Not sure what to do with Grandma's leftover fruitcake?

Professor Thom Castonguay has an idea. As part of our Science out of the Box series, we visit a lab at the University of Maryland's Department of Nutrition and Food Science, where Castonguay demonstrates bomb calorimetry -- the science of calculating calories by blowing up food.

A bomb calorimeter is designed to contain miniature food explosions and measure the heat produced by the explosion.

Twenty-Six Calories Can Lift an SUV 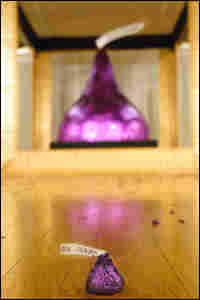 To measure calories, scientists use a device called a bomb calorimeter. The incineration of food causes the temperature of the water to rise. Because the amount of energy in the system remains the same, the difference in temperature indicates how much heat (or energy) is released in the food. Gary Lane Bertland / University of Missouri-Rolla hide caption

You'd never think that eating one chocolate kiss could provide enough energy to lift an 8,600 pound SUV over six feet into the air. After all, according to the label, there are a mere 26 calories in that one piece of chocolate. But there is a different way of looking at calories and energy. And the end result illustrates that there's way more energy in your food than what you may think.

(At this point, if you're not an aspiring chemist, know that what follows is potentially your worst nightmare: dense scientific explanations. Feel no shame, and move quickly down to the bold header. All aspiring chemists and friends, onward!)

"When you lift 2.2 pounds [a small book] one meter [that's about forty inches] off the ground, you expend 10 Joules of energy," explains Joe Cifelli, who teaches science education at St. Josephs University in Philadelphia, Pa. He uses analogies to illustrate how much energy food contains.

Confused yet? Wait, there's more. We're all used to thinking about "small c" calories -- the calories on American food labels. A calorie is the energy needed to increase the temperature of 1 gram of water by 1 degree Celcius. But there is another type of calorie -- with a "capital C" -- which equals 1,000 "small c" calories. An apple containing 50 Calories actually contains 50,000 calories. When you exercise and burn 200 Calories, you're burning 200,000 calories. But almost every nutrition reference in the United States refers to Calories but calls them calories. (The process is different in Europe, where food labels list things in kiloJoules.) It's terribly tricky. I burn calories just thinking about it.

So the 26 calories in your piece of chocolate (from the label) actually contain 26 Calories –- or 26,000 calories.

Convert that to Joules and you wind up with more than 108,000 Joules. And if you expend 10 J every time you (theoretically) lift a small book one meter off the ground, you'll suffer through 10,800 book-lifts to burn 26 Calories. Or you can try lifting one large SUV once, about 6 feet in the air. So get cracking.

(Of course, you shouldn't be too concerned –- the SUV scenario assumes two things: first, that no calories are burned through normal human digestion and two, that all of the energy is available to lift the car. In fact, most of the calories you consume are used by the human body to maintain normal bodily functions. The SUV scenario just illustrates how much energy is available in your everyday calorie consumption.)

To measure calories, scientists use a device called a bomb calorimeter, which calculates the change in heat in a closed container. In a high school chemistry lab, students might use a simple calorimeter made out of a covered coffee can (with two compartments) and a thermometer, says Cifelli.

"If you introduce an electrical element that causes the food in one compartment to burn," says Cifelli, "and if you have water in the other container, you can measure the temperature before and after the food burns to determine the amount of energy lost by the food."

Cifelli explains that the amount of energy in a closed, covered container won't change. Because the energy stays the same, the water must gain the heat lost by the food. If you measure the difference in temperature, you can determine how many calories are in the food.

William Ikins, chemistry director of Silliker Labs, a food testing laboratory, explains that there are specific methods to quantify the amount of moisture, fat and protein in any food substance.

Take a chocolate kiss, for example.

To determine the amount of protein in a chocolate kiss, the kiss is analyzed using the Kjeldahl method: The sample is chemically digested, and then converted into a substance containing ammonium ions. The amount of ammonium -- which contains one of the building blocks for all protein -- is then isolated and measured.

Finally, the mineral content of the chocolate kiss is analyzed. After incinerating the kiss in a high heat oven, scientists can calculate the amount of ash (essential minerals remain in the ash; everything else burns.)

Carbohydrates are determined through a process of elimination. Assume what's left over equals the amount of carbohydrates.

Going back to our imaginary chocolate kiss, which contains 1.3 grams of fat, 0 grams of protein, and 3.6 carbohydrates.

But with the amount of work I've just done, I think I'll have that chocolate kiss. No, make it two.