Accessibility links
A Fond Farewell to America's Unexpected President A memorial service at the National Cathedral in Washington, D.C., pays tribute to former President Gerald R. Ford, who died the day after Christmas. An unelected and unexpected president, Ford is being honored as a leader who provided the nation with a strong sense of calm and conducted himself with openness and decency.

Ex-Secretary of State Henry Kissinger: 'The Cold War could not have been won' without Ford

Tom Brokaw on Ford: 'The most underestimated' man in politics

Brokaw Jokes About Ford's Fashions as President: 'I think they're eligible for a presidential pardon'

Hear the Eulogies in Full 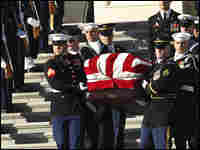 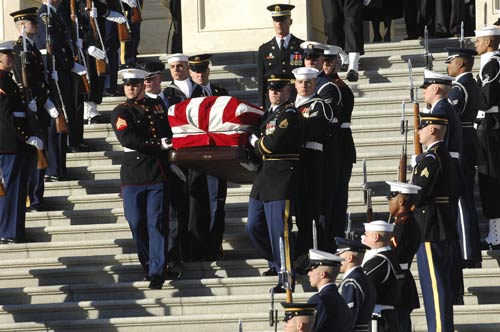 A military honor guard carries the flag-draped casket of former U.S. President Gerald R. Ford down the steps of the Capitol in Washington, D.C. Funeral services were held at the National Cathedral.

Gerald R. Ford came to the White House after having been appointed vice president, the first such appointment under a new constitutional amendment. And he took over the presidency when, in another first in U.S. history, a president stepped down. Read about Ford's life and legacy.

Former President Gerald R. Ford has been hailed as a leader whose decency and openness helped the nation surmount the Watergate scandal -- and a man of good humor and humility as well. Americans paid tribute in California and Washington, D.C., and on Wednesday they will bid a final farewell in Grand Rapids, Mich. Ford will be buried in his hometown Wednesday afternoon, ending more than a week of public mourning after his death on Dec. 26 at age 93.

President Bush was one of the many prominent figures paying tribute to Ford at Tuesday's memorial service at Washington National Cathedral. "In President Ford, the world saw the best of America," Bush said, "and America found a man whose character and leadership would bring calm and healing to one of the most divisive moments in our nation's history."

Bush also took note of Ford's down-to-earth style, recalling Ford's words as he assumed the presidency: "I am indebted to no man and only to one woman -- my dear wife."

A Man of Integrity

"When President Nixon needed to replace a vice president who had resigned in scandal, he naturally turned to a man whose name was a synonym for integrity," the current President Bush told mourners. "And eight months later, when [Ford] was elevated to the presidency, it was because America needed him, not because he needed the office."

An unexpected and unelected president, Ford died the day after Christmas at the age of 93 at his home in Rancho Mirage, Calif.

On a cool, clear and wind-whipped morning, Ford's children accompanied the former president's flag-draped casket down the Capitol steps, where it was held by members of the armed services as a 38-gun salute was fired off. The late president's widow, Betty Ford, whose public struggle with alcoholism inspired many Americans to confront the issue, stood at the bottom of the Capitol steps.

For the past few days, Mr. Ford's body had been lying in state at the Capitol and then, for a time, was lying in repose outside the Senate. The dual honor was a testament not only to his role as president of the Senate -- during his brief stretch as vice president -- but also for his long service in Congress.

Calm in a Tumultuous Time

In 1973, Ford, then a senior Republican congressman from Michigan, was appointed to replace Vice President Spiro Agnew, who himself resigned as part of a plea bargain with prosecutors amid a bribery scandal. Less than a year later, Ford replaced Nixon, who resigned in August 1974 after the House Judiciary Committee had approved articles of impeachment against him. Ford became the nation's 38th president in a hastily arranged, bare-bones swearing-in ceremony.

At the memorial service, several of Ford's longtime associates recalled his leadership during that tumultuous time.

Under Ford, former President George H.W. Bush served as unofficial ambassador to China and led the CIA. "Long before he arrived in Washington, Jerry Ford's word was good," said the father of the current president.

Long after he arrived, he had the same reputation. As a representative, Ford served on the blue-ribbon panel appointed to investigate circumstances surrounding the assassination of President John F. Kennedy.

"The conspiracy theorists can say what they will, but the Warren Commission report will always have the final, definitive say on this tragic matter," George H.W. Bush said. "Why? Because Jerry Ford put his name on it."

Ford provided even greater assurance to the nation, former president Bush noted: "History has a way of meshing man and moment, and just as President Lincoln's stubborn devotion to our constitution kept the union together during the Civil War and just as FDR's optimism was the perfect answer to the despair of a Great Depression, so, too, can we say that Jerry Ford's decency was the ideal remedy for the deception of Watergate."

Others paying tribute included former Secretary of State Henry Kissinger, who praised Ford's work on arms control with the Soviets. Former NBC News anchor Tom Brokaw, a White House correspondent during Ford's years in office, said that the president's openness to the press represented a marked change from the antagonistic approach of the Nixon White House, which compiled "enemies lists" that included reporters.

Earlier this morning, honorary pallbearers assembled on the grounds of the Capitol building. They included some of the most prominent current and past figures in Republican life, including two former key Ford aides: Donald Rumsfeld and Dick Cheney. Rumsfeld, a former congressman, was appointed chief of staff under Ford. Then in 1975, at age 43, he became the youngest secretary of defense in history (and at age 69, the oldest under President Bush in 2001). Vice President Dick Cheney replaced Rumsfeld as Ford's chief of staff.

The harmonious televised tableau was a contrast to revelations in recent days about Ford's strong views about two wars -- Vietnam and Iraq. Ford gave extensive interviews to Bob Woodward of The Washington Post in interviews only to be published posthumously.

Ford told Woodward that he parted ways with his former proteges Cheney and Rumsfeld as well as President Bush.

"I don't think I would have gone to war," Ford said in the interview, conducted in 2004. "I just don't think we should go hellfire damnation around the globe freeing people, unless it is directly related to our own national security."

Woodward also reported that Ford had visited Vietnam as a congressman in the early 1950s to learn more about the efforts of the French to maintain influence on their former colony.

"We made the same mistake that the French did, except we got deeper and deeper in the war," Ford said, according to the Post. "We could have avoided the whole darn Vietnam War if somebody in the Department of Defense or State had said, 'Look here. Do we want to inherit the French mess?' "

During Ford's tenure, the United States finally left Vietnam for good, ending the war that haunted the presidencies of Lyndon Baines Johnson and Nixon.

In recent days, Ford has also been remembered for providing some fiscal discipline on federal spending during a time of financial anxiety. And he has been recognized for having a sense of humor about the satirical drubbing he got from such comics as Chevy Chase of NBC's Saturday Night Live, who capitalized on his occasional stumbles and verbal gaffes to portray him as a klutz and a lightweight. In fact, Ford was a varsity football player at the University of Michigan; he served in the U.S. Navy during World War II and graduated from Yale Law School.

White House staffers silently lined the sides of Pennsylvania Avenue to honor Ford, and the funeral procession slowed to a crawl as it passed the White House itself.

The Episcopal service at the Washington National Cathedral represents the final segment of the capital's state funeral for Ford.

His body will be flown to his hometown of Grand Rapids, Mich., where there will be a viewing at the presidential museum in his honor before his interment on Wednesday.