Accessibility links
Don't Forget the Fennel Fennel's subtle flavor works just fine on its own, but does wonders when combined with other foods. Indeed, fennel's strength may be its power to blend and enhance other flavors. Howard Yoon demystifies this oft-forgotten vegetable. 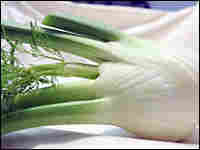 Fennel's strength may be its power to blend and enhance other flavors. Scroll down for recipes. Howard Yoon hide caption 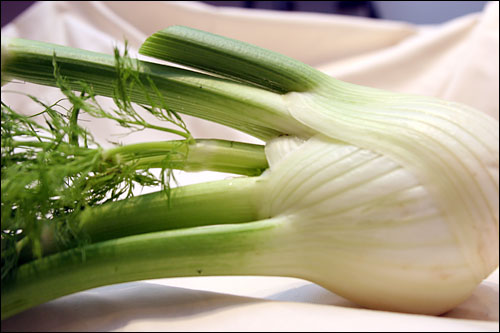 Fennel's strength may be its power to blend and enhance other flavors. Scroll down for recipes.

The Zelig of Vegetables

Fennel has played a supporting role in history (much like its supporting role in recipes). According to Greek mythology, Prometheus smuggled fire to humans inside the hollow wand of a fennel stalk. Roman writer and scientist Pliny the Elder believed in its medicinal properties, and had at least 22 remedies linked to it. Charlemagne made fennel an essential vegetable in every imperial garden. In medieval times, fennel was used to protect against witchcraft and evil spirits. Puritans chewed fennel seeds during worship services, and to help stave off hunger during fasts. 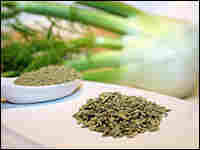 The fennel plant and seeds alike can be consumed. Howard Yoon hide caption 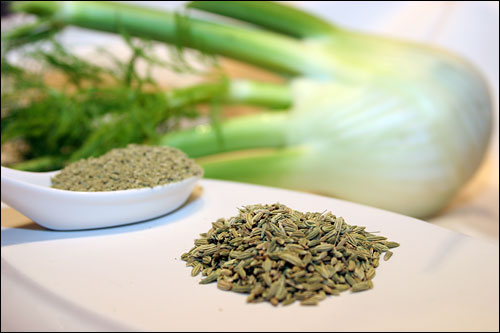 The fennel plant and seeds alike can be consumed.

How to Prepare Fennel

Don't be intimidated by the odd shape. Cut the stalks where they meet the top of the "bulb." These stalks can be added to stocks, roasts and braises, or simply eaten raw, just as the Romans did. Remove the fronds and serve as you would celery sticks. The fronds can be used separately in dips or as an aromatic in fish, pork or lamb dishes.

Cut off the bottom of the base. Then cut the bulb lengthwise, then in quarters. Cut around the tough center core. You will have four even quarters for cooking.

Alternatively, once you have removed the top and bottom of the bulb, use a mandoline or sharp knife to slice the fennel into thin slices.

A fresh fennel bulb will last a few days in the refrigerator. Keep whole, with stalks on, until use.

If you've never cooked with fennel, you're not alone. For years, I avoided the bulbous green and white vegetable labeled "sweet anise" because I associated it with black licorice. Who in their right mind would want to taste black licorice at the dinner table?

But then I learned anise and "sweet anise" are two very different things. Anise is a pungent pint-sized herb, while "sweet anise" — or fennel — is a hearty vegetable with a thick, bulbous base and celery-like stems that grow upward to 5 feet tall. It has a sweeter, more delicate flavor than anise.

Fennel's subtle flavor works just fine on its own, but does wonders when combined with other foods. Indeed, fennel's strength may be its power to blend and enhance other flavors. Tuna tastes more tuna-like when cooked with fennel. A simple salad of oranges, red onion and lemon vinaigrette has more zing with the addition of crunchy, raw fennel. Grilled sea bass becomes emblematic of Mediterranean cuisine when stuffed with lemon slices and fennel fronds.

The fennel in the produce section of a grocery store is Florence fennel, or finocchio. On top are fragrant emerald fronds that look much like dill. Below are stout stalks that resemble celery and shoot upward like fingers being counted. The edible white "bulb" is actually not a bulb at all, but tightly stacked leaves that unpack like the base of a celery stalk.

Though all parts of the Florence fennel are edible, the stalks tend to be fibrous, like celery, while the fronds can have an anise intensity that might turn off some people. The thick white leaves of the base offer the most versatile use. When cooked, the leaves become supple, the same way onions lose their firmness, and retain only a faint hint of anise.

If you have never tried fennel as a vegetable, you've almost certainly tasted it in its other form: a spice. The greenish-brown seeds from the variety called common fennel are used to season Italian sausages, meaty stews and rustic breads. When ground up, the spice is used in rubs for fish, pork and lamb dishes and in other spice mixes. Fennel spice also is a key ingredient in Indian curries and is one of the five essential spices in Chinese five-spice powder.

And if all this isn't enough, this versatile vegetable has been used throughout history to cure stomach ailments, freshen breath and help fight weight gain. It also is high in vitamin C.

So if, like me, you've passed fennel by in the produce section, take a second look. 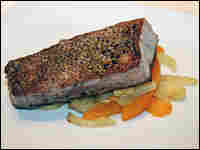 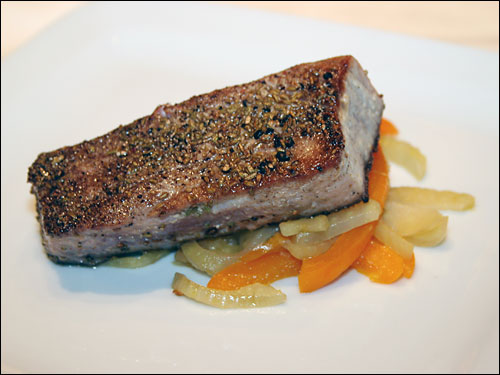 Using a coffee grinder or mortar and pestle, crush fennel seeds into a powder. Place in a shallow bowl, add crushed pepper and mix until well incorporated.

Press fennel-pepper mix onto tuna steaks on one or both sides, depending on your preference.

Carefully place tuna steak, mix-side down, into the heated pan.

Cook on each side for 2 to 3 minutes until pink in the middle.

Serve on bed of braised fennel (below).

Remove stems and base from fennel bulb. Cut fennel into 1/4-inch slices.

Add bell pepper and garlic and saute for another 2 to 3 minutes.

Add wine and water, and cover. Reduce heat to low and simmer for 5 to 8 minutes, until fennel is fork-tender. Remove cover to reduce liquid for last few minutes. 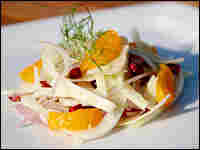 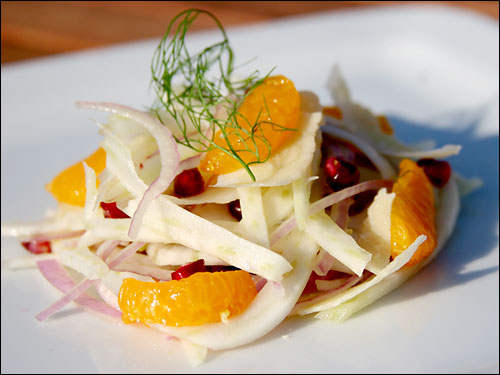 Shavings of Pecorino or Parmesan

Slice fennel and red onion as thinly as possible, being careful to remove the tough root of the fennel bulb.

Toss gently in large bowl with lemon juice and olive oil. Refrigerate for at least 15 minutes.

Add cheese, and salt and pepper, if desired.

Fennel and sausage are a perfect match. My friend Cecily Cohen's favorite fennel recipe, which follows, is always a big hit.

1 16-ounce can whole peeled tomatoes, drained and smashed with hands

Cover skillet, reduce heat and simmer an additional 6 to 8 minutes. Add salt and pepper to taste.