Accessibility links
Milestones at Home and in Iraq Recent days have been marked by a number of milestones -- the death of former president Gerald Ford, the execution of Saddam Hussein and U.S. service deaths in Iraq exceeding 3,000. Now we await another potential milestone -- President Bush's speech on a new Iraq policy, and whether it will include a troop surge.

Milestones at Home and in Iraq

Milestones at Home and in Iraq 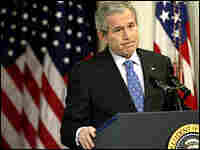 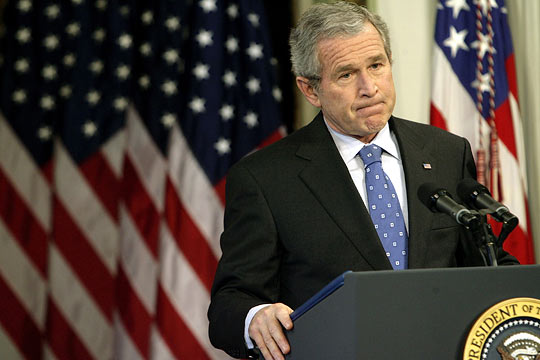 Rarely have so many historical milestones been crowded into so tight a time frame.

In these last days of 2006 and first of 2007, we have eulogized a former president who left office 30 years ago -- a symbol of an era now far enough in the past to be recalled fondly.

In these same days, Saddam Hussein was hanged in Baghdad -- ending his life and career but not the warring that was his legacy. Within the same weekend, the number of U.S. service personnel killed in Iraq passed 3,000.

And in this week, we also swear in the first Democratic Congress in a dozen years, elected in large part because voters were exasperated by the war in Iraq.

Even the United Nations is turning a historic corner, installing South Korean Ban Ki-Moon as its first new secretary-general in a decade.

So it would be fitting if President Bush came forward this week with a milestone of his own, a speech announcing a new direction in Iraq that actually included a new direction for U.S. policy there.

We have been promised such a speech for a nearly a month now, with the delivery date steadily receding. It now appears the president may address the nation before mid-January on the subject.

But the president has not shown a great eagerness to make this speech. He has conducted weeks of preparatory chats with advisers, most of whom have been advising him for years. He has also let it be known that he is leaning toward a marginal escalation -- committing more U.S. troops to the war. These would not be fresh troops so much as Iraq war veterans extending their current tours or returning to the region sooner than planned.

This idea, known in administration parlance as a troop surge, has the virtue of constancy. It would maintain the commitment the United States has made over the past four years to establishing a Western-style democracy in Iraq. It keeps faith with the promises the president has made to the government of Nouri al-Maliki, the people of Iraq, the American public and the families of U.S. military personnel. The president often says that the families of fallen U.S. soldiers tell him to "finish the job" so as to honor their sacrifice.

The surge would also signal the White House's attitude toward the recommendations of the Iraq Study Group, and this too may be seen as a virtue within the president's inner circle. The ISG was a 10-member bipartisan commission, carefully chosen by Congress to assess the situation. The panel's leading figure, former Secretary of State James Baker, was practically the alter ego of the first President Bush. He was to ensure that the commission got to the bottom of things and that its report would go right to the top.

But the ISG's bitter prescriptions have not found favor in the White House. The panel chose to nudge the president toward a strategy of negotiation and withdrawal, hoping its report would become a milestone in its own right by enabling the White House to make a turn toward the realistic.

Perhaps the panel's rejection of the previous course was stated too starkly. And the powerful Baker connection may have been counterproductive. Talk of a "Baker Regency" in the last two years of this presidency, combined with magazine covers showing the current president as a foundering, miniature version of his father, may have poisoned the well.

For now, we wait. But as the weeks have stretched on through the holidays, another milestone of sorts has been achieved. The support for the president's policy in Iraq has reached its lowest ebb to date. Public support as measured in the polls has reached historic lows. And the willingness of prominent Republican senators to question the war has reached an unprecedented high.

The Republican turnaround has been unmistakable on the question of the troop surge. Although the idea is backed by Sens. John McCain of Arizona and Lindsey Graham of South Carolina -- both longtime advocates of larger deployments -- it has not found many other friends in the Senate.

In fact, several Republicans who have recently returned from the region have distanced themselves from the idea, including Susan Collins of Maine and Norm Coleman of Minnesota. Both face the voters in 2008 in states that voted against Bush in 2004.

But even in red states, there have been Republicans voicing their doubts. Sen. Richard Lugar of Indiana, long the senior Republican on the Foreign Relations Committee, has said he is undecided about the surge. And the usually stalwart Saxby Chambliss of Georgia has said that higher troop levels must have a specific mission that they would achieve and then "get out."

The increasing frequency with which that phrase is heard in Washington may be a milestone in itself.