Accessibility links
No Americans Need Apply? Work Ethic Questioned Many businesses say they need immigrant workers because they can't persuade Americans to take the jobs they offer. One such business in Galena, Ill., hires Mexican workers. 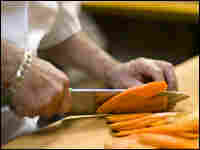 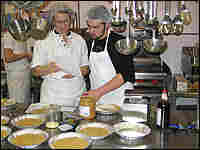 At a vocational college in Elizabeth, Ill., high-school students learn restaurant skills such as budgeting and creating menus. The class is a part of a program offered by the National Restaurant Association that sponsors similar restaurant-management classes all over the country. Jennifer Ludden, NPR hide caption

In the immigration debate, those who favor expanding opportunities for foreign workers — including President Bush — often argue that they take jobs that Americans simply won't do. Activists who want to reduce immigration reject that notion, and many ordinary Americans find it hard to believe.

But if you ask Larry and Mary Blankenbaker, there's no question that foreign workers are a necessary part of the economy. They are the owners of Benjamin's, a pub-style eatery in Galena, Ill. Galena is hardly the type of town one might expect to find an economy dependent on foreign labor, but the Blankenbakers insist they've needed Mexican immigrants to fill out their work force since the mid- to late-1990s.

"Basically, we were short-staffed. There was staff that was here working doubles," Larry Blankenbaker says.

One year, the Blankenbakers started running ads for extra help in May in anticipation of a busy summer and fall season. The ads ran through August. In all that time, they say, only three people applied, and one quit after two weeks. Today, nearly all the kitchen staffers at Benjamin's — one-third of all of its employees — are Mexican immigrants.

And that's hardly unusual. Nationally, the restaurant industry is the largest employer of foreign-born labor. Ezekial Morales, for example, moved to the United States when he was 8 years old. He began working as a busboy at Benjamin's five years ago when he was 16. Today, he said, he pretty much does everything.

"I love it actually — meet new people every day. Regulars come in, get to know them. It's more [about] sales and entertaining people," Morales said.

As he sees it, Americans have the luxury to leave a job they don't like. But most Mexicans in his part of Illinois have little education or English.

"If you get fired, where else you going to go?" he said.

It's this concern — that immigrant workers are trapped — that fuels suspicion that U.S. businesses have created a lower-paid second class. Galena's mayor, Tom Brusch, said he has no problem with the town's immigrants. In fact, he thinks they should be allowed to become citizens. But he's skeptical about the inability of business owners like the Blankenbakers to find American workers.

Actually, that's exactly what the Blankenbaker's pay. Still, Mayor Brush wonders what employers here and across the country would have to pay if there were no immigrants available for hire.

This is a question that keeps economists busy and, in some cases, has even prompted lawsuits. One such lawsuit accused the Swift meat-packing company of conspiring to hire illegal workers and depress wages.

A Question of Wages, or Work Ethic?

Larry Blankenbaker says that wages are not responsible for these changes in employment. Instead, he suspects a more complex and systemic problem is to blame: an eroding work ethic. For the first time in five years, he recently filled a cook's position with a native-born American. The new employee lasted only two weeks.

"All of a sudden, working the night shift — which is what he was hired for — became difficult because he really wanted to leave by 9:30 [p.m.] And our kitchen stays open until 11," Blankenbaker said.

"We have parents that actually call in and lie for their kids, and call them in sick when they're going to concerts," he added. "And in the meantime, there's 20 other people that have been hurt, because all of a sudden we're short-staffed. What kind of a lesson is that for a parent to teach their kid?"

Pat Leitzen Fye is the Economic Development Director for Jo Daviess County, which includes the town of Galena. She worked with a nearby community that recently approved a new hog-processing plant, where starting pay was billed at $12 an hour, plus benefits. Even though that's more money than most jobs offer in rural Illinois, Lietzen Fye said the community wasn't satisfied.

According to Lietzen Fye, people responded by saying, "Those plants bring in Hispanic populations. They bring in people from outside the community. They're not our unemployed people. Because that's the kind of work that our people don't want to do."

For its part, the National Restaurant Association has a decade-old effort to attract more people into the industry. At a vocational college near Galena, Cathy Moon teaches classes for high-school juniors and seniors on how to prepare foods such as batches of fudge. She's part of a program that sponsors similar restaurant-management classes all over the country.

"In more-rural areas, they still look at it as a burger-flipping industry, and we'd like to change that attitude," she said.

A handful of the students in her class said they hope to go into the restaurant business. And along with baking, budgeting and creating menus, they say there's another skill they'd like to acquire: Spanish.