Accessibility links
Winter Wear Goes to the Dogs If you think it's cold outside, consider whether your dog shares your shivers. This time of year, many dog owners put coats and other rugged outwear on their pets before heading outdoors. 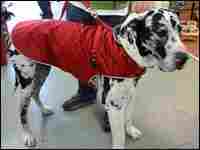 If you think it's cold outside, consider whether your dog shares your shivers. This time of year, many dog owners put coats and other rugged outwear on their pets before heading outdoors.

But when you live in a city or suburb, does your dog really need a jacket and pair of boots?

Like their humans, urban dogs grow accustomed to a warm house. Their own coats may not be as thick as their rural cousins' coats might be, making it more difficult for the animals to adapt to the cold. Footwear may be necessary in some cities to protect tender paws from de-icing salts and chemicals.

If you're not sure whether your city dog needs a coat, look for shivering during or after exercise. 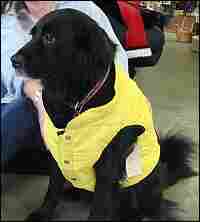 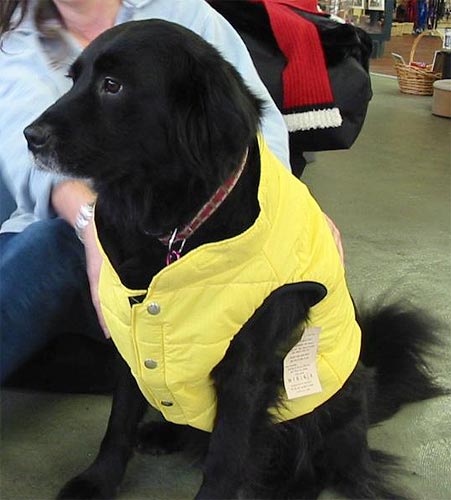 Never before have I seen a winter where so many Portland, Ore., dogs are wearing coats. And it's barely gotten below freezing. Naturally, dogs who have the genes of greyhounds, Manchester terriers and Chihuahuas need extra help in this wet and windy climate. For that matter, even poodle-types who've been clipped really closely may get chilled in the cold and damp. But what's with all the blanketed labs and terriers? I mean, is it the owner or the dog who's chilled?

It seems when it comes to the coat question, there is no easy answer. Let's start with the simple fact that no two dogs -- even of the same breed -- are alike. Then add these variables: Just how cold are we talking? How long will the dog be out for? How typically active is the dog?

Let me give you a case in point. I just adopted a six-year-old dog named Starlet. Unlike my last blessed beagle, Starlet's a tough little creature who doesn't care if the wind is howling or rain is pouring down. She can keep pace with my very macho dog, Zoe Mae, and thinks nothing of a five-mile hike.

In the last month, Starlet's begun to shiver. At first, I thought she was putting me on. (After all, she's a beagle). But sure enough, after 20 minutes out and about, her muscular activity would increase as she worked to keep her body temperature up. That's what shivering is.

Needless to say, Starlet now has a coat.

Bottom line? Pay attention. Your dog's behavior will likely tell you when and whether he's uncomfortable. That's your cue to act.

Incidentally, if you're at all embarrassed by the notion of canine outerwear, it's typically the toughest of dogs who wear boots and coats. Iditarod runners, police and military K-9's and search-and rescue dogs all need foot protection. And I have it on good authority from a thermal dog coat manufacturer in Wales that his No. 1 customers are gamekeepers, who suit their shepherds and setters up after a hard day on the run.