Accessibility links
Sex Offenders Fill Geriatric Wards of U.S. Prisons Experts say it's the only crime that offenders are more likely to repeat with age: sexual abuse. And now, prison wards around the country are filling up with geriatric sex offenders. Laura Sullivan takes an inside look at one Pennsylvania prison. 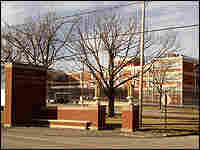 In the geriatric ward of Pennsylvania's Laurel Highlands Prison, the floors are squeaky clean linoleum. The walls are painted in dull pastels. Dozens of inmates in hospital gowns line the hallways in wheelchairs, doing absolutely nothing.

Almost half of these men are sex offenders. They were once simply "dirty old men." Now, sex offenders in their 60s, 70s and 80s — like the men here — are a growing problem in the nation's prisons. Experts say it's the only crime that offenders are more likely to repeat with age. The result has been an explosion in the number of elderly men behind bars.

In the hallway of Laurel Highlands, a prison nurse comes to fetch Dale, a 63-year-old from upstate, to cover his feet in ointment. Dale is diabetic; he had a stroke and can't feel his legs. He came to prison six years ago.

"The offense was indecent exposure, indecent assault and corruption of a minor," Dale says as the nurse slathers on ointment. Prison officials asked that we not use inmate's last names.

There are only two kinds of inmates in this geriatric ward. Lifers, mostly here for murder, and sex offenders. Dale is a sex offender. He's pretty typical. He is a first-time offender, and his victim was a child. Dale sexually abused his grandson.

"You can dominate a younger person to where you make them feel like it's all right," Dale says. "I was fortunate — I look at it like that — that I got caught the very first time it happened. It's something that you don't talk openly about. It's shame, is what it is."

Dale says his sexual fantasies involving children came on later in life, in his late 50s, after his wife died. He had never been in trouble with the law before and was well known in Pennsylvania's rural Tioga County, where he was a retired state road inspector.

"You do this for control, for self-gratification and things like that," Dale says. "I would say it's more prevalent at age 50 and over."

Susan King has been the prison psychologist at Laurel Highlands for seven years and runs the sex-offender programs. She says it's difficult to figure out why some older men would suddenly become sex offenders.

"I think at times they're perplexed — I know we certainly are — as to why this would suddenly happen," King says. "I think part of it with the elderly [is that] they are still sexual. There might be frustrations, and they act it out on children because they are an easier target. Your performance doesn't maybe have to be perhaps up to your normal standard for you to offend a child."

There are 110 inmates on this particular ward; almost half of them are sex offenders. It's a phenomenon happening in prisons across the country.

Once, the only inmates who made it to old age behind bars were those with decades-long sentences. Now there's far less tolerance for sex crimes, and there's far more reporting when it happens — no matter what the age of the offender. But not many people in corrections expected to see so many elderly men.

Some Just Can't Admit What They Did

Laurel Highlands, a minimum-security prison, has a small recreation room, with florescent lights and a television in the corner. A dozen men pour in from the hallway for their hour of free time, to play cards and read newspapers. There aren't any chairs because everyone pulls up to the tables in wheelchairs. One man is making an effort to use the weights, straining to lift five pounds.

There are unwritten prison rules here. Lifers don't mingle with sex offenders. Paul, a 74-year-old lifer, murdered two people. He's glaring at a group of men sitting together in their wheelchairs.

"I don't know who ever figured that one out, to send us here with them — rapists, child molesters," he says with disgust.

One of the difficulties of operating a ward like this is that the two groups don't mix. It's hard to believe that could be a problem, because few of these men can even go to the bathroom alone. But they've had to move some lifers to other hallways because they taunted some of the men so relentlessly.

It could be one of the reasons many of the sex offenders here refuse to attend counseling. They're called "non-admitters." Harry, 84, is one of them. He was convicted of abusing his granddaughter, but he refuses to even say that much. He's been here since he was 74.

Like a lot of non-admitters, Harry was difficult when he first arrived, staffers say. Harry says that at his age, he just didn't like people telling him what to do.

"It's one hell of a shock until you get used to it," Harry says. "Then you adjust. You don't take on other people's troubles, you don't tell them what yours are and you mind your own business."

Harry's health is what concerns him now. He has four more years on his sentence, and he really doesn't want to die in prison. Harry takes 13 pills in the morning, two at noon and six at night, and he uses an oxygen machine three times a day.

"This is our most medically involved out of the four units," she says.

The room is for men who can't get out of bed. It costs taxpayers more than $75,000 each year to house a geriatric inmate — three times the cost of housing a younger man. This unit has one full-time doctor, 14 nurses and 15 dialysis machines.

Donald, a 69-year-old from Erie, is lying on a bed with wheels.

"Once you're in this chair and you can't get up, slowly your body starts to deteriorate," Donald says. "From my waist down, it's just useless."

Donald says he has never talked about what he did to his children's 13-year-old baby sitter. For 27 years, he's refused all counseling. But on this day, after a while, he says he wants to tell the story — his version of it.

"My wife would come in there, and she would say, 'Don't do that. It's inappropriate to do this,'" Donald said, pausing. "Well, things got a little heated up, and I was drinking, and things happened."

Asked if he could benefit from prison programs that make inmates take responsibility for their own actions, Donald says: "To this day I still regret it. It still bothers me, what I had to do, whether I liked to do it or not."

Donald says he does not think he is a danger to little girls. But the statistics are less clear. The majority of sex offenders do not reoffend. But for those who, like Donald, have never had counselfing, the numbers aren't good.

Two studies, one from 2003 from the Justice Department (Recidivism of Sex Offenders Released From Prison in 1994) and another from Norway (Recidivism Among Sex Offenders: A Follow-Up Study of 541 Norwegian Sex Offenders) suggest sex offenders are more likely to start committing crimes, or keep committing them, in old age.

The Norway study found, "Young boys presented a favorable prognosis...For adults and older men, the prognosis was less favorable. The likelihood of recidivism increased with age." It also found, "The older the offender was at the time of the first conviction, the more likely he would tend to repeat the crime."

Prison counselor Penny Sines says some elderly sex offenders can be helped by counseling. But the issue is controversial.

"I have a lot of older guys say that the sex offense is a disease, and that it will always be with them," she says. "And as long as they continue to get treatment, they hopefully will not re-offend."

At Laurel Highlands, it might not matter. Most of the inmates are likely to die before their sentences run out.