Accessibility links
Profile: Mitch McConnell, Senate Minority Leader Mitch McConnell once planned to be the Senate majority leader, but the Democratic congressional victory upset that dream. He is steeped in the ways of the Senate — and ready to use that knowledge to either promote or thwart the Democrats' legislative agenda. 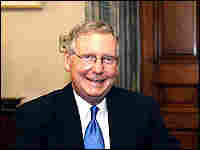 Mitch McConnell surely wasn't hoping to be the Senate's next minority leader. For years, he had planned to be the Senate leader who sets the agenda, who takes charge at the beginning of each day's session, and who would carry the title previously held by such illustrious GOP senators as Robert Taft, Howard Baker and Bob Dole.

McConnell was unanimously chosen by his fellow Republicans to succeed retiring Senate Majority Leader Bill Frist, but the Nov. 7 election left his party one seat short of a majority. So with just 49 votes in the chamber this week, McConnell will have to settle for being minority leader.

As the senior senator from Kentucky, McConnell also had a bit of a dilemma about giving up the desk on the Senate floor where he's been sitting through four years as Frist's second in command. The desk once belonged to the legendary 19th-century Kentuckian Henry Clay, and it has long been allotted to the senior senator from Kentucky. But McConnell couldn't take it with him to the first seat in the front row, the position traditionally occupied by the party leader.

McConnell resolved that dilemma by using his keen understanding of Senate rules and procedures: On the last day the Senate met under Republican control, McConnell sponsored and saw through to passage a resolution allowing Kentucky's junior senator, Jim Bunning, to sit at Clay's desk for as long as McConnell remains the leader of the GOP caucus.

That move typifies the attention to detail and respect for tradition that have characterized McConnell's 22 years in the Senate. Reserved and bespectacled but also sly and quick-witted, McConnell is an excellent debater who has repeatedly shown the willingness to lead when the floor fights have been toughest. His eloquent speeches in opposition to the popular campaign-finance overhaul sponsored by Republican John McCain and Democrat Russell Feingold in 2002 have become the basis for court suits limiting the reach and effect of that legislation.

Close Ties to the White House

McConnell is also married to a member of President Bush's Cabinet. His wife, Elaine Chao, has served as Labor Secretary throughout the current Bush administration. And McConnell, too, has been a loyal stalwart of the president's. He strongly supported the pre-emptive invasion of Iraq, and over the past year, he has repeatedly accused Democrats of wanting to "cut and run" from the president's commitment there.

Nonetheless, McConnell is also a man of pragmatic judgment. And such was his desire to be majority leader (rather than minority leader) that he hosted a fundraiser in 2006 for the only Senate Republican to vote against the Iraq war resolution — Rhode Island's Lincoln Chafee. McConnell overlooked Chafee's frequent apostasies and aided his bid for re-election, but to no avail: Chafee still lost, dropping the GOP into minority status in the 110th Congress.

Bumping Up Against Lott's Sphere of Influence

There's been much speculation about whether McConnell will end up playing second fiddle to Mississippi's Trent Lott, who, with a razor-thin margin, won the right to take over McConnell's previous post as Republican whip. Lott is a much more familiar figure in Washington, having already served as both majority leader and minority leader in the Senate (and as a member of the minority leadership in the House in the 1980s).

Four years ago, the Mississippian was in line to become majority leader once again after the GOP seized control of the Senate in the elections of 2002. But at a farewell party for Sen. Strom Thurmond, Lott doomed his own ascendancy by praising Thurmond's failed 1948 bid for the presidency on a segregationist Dixiecrat ticket.

As objections were raised and the controversy blew into a storm, McConnell was one of the few Senate colleagues who stood up for Lott and pledged support — even as President Bush publicly rebuked the Mississippian and left the impression he would prefer someone else at the Senate's helm. It was in those waning days of 2002 that Bill Frist of Tennessee, with White House encouragement, positioned himself to jump in as Lott's last-minute replacement.

Frist subsequently served four years as the Senate majority leader. But they were difficult years, in which the Democrats often thwarted the majority party's initiatives. And as public support for the war in Iraq waned, Frist was unable to find ways to salvage the final months of the 109th Congress and carry a strong message to voters in the midterms. In the end, six of the seven most vulnerable Republican seats in the Senate were captured by the resurgent Democrats, even as Frist's party failed to capture a single Democratic seat. The net loss of six seats reduced the GOP to minority status, an outcome few had predicted — even on the eve of the election.

In the wounded atmosphere that followed, Lott re-emerged. In the secret vote taken in the Senate Republicans' inner sanctum, Lott beat Lamar Alexander of Tennessee for the No. 2 post of whip. It was a triumph on a personal level to make this return, but incomplete because he was returning in a subordinate role to McConnell. Lott was uncharacteristically tight-lipped as he stood beside McConnell and confronted a scrum of reporters and TV cameras on the day of the leadership elections in November. The usually voluble senator, who's taken some sharp shots at President Bush since losing his leadership post, is known to be very good at counting votes in his caucus — the skill most required of whips. But Lott's skill set goes well beyond this. In fact, his command of the Senate's arcane rules and floor strategy will be the equal of McConnell's own.

Assuming that Lott and McConnell work in tandem, their joint understanding of how the Senate works should be an enormous asset to the GOP. In the Senate, the minority has considerable clout — especially when it's only one seat short of holding the majority, and when 60 votes are needed to pass most major legislation.

McConnell has already balked at some of the agenda set by the Democrats' new Majority Leader Harry Reid. McConnell says he'll support a higher minimum wage only if the bill includes tax breaks for small businesses, which is a deal-breaker for many Democrats. McConnell also opposes eliminating the tax breaks for oil companies that Congress approved in last year's energy bill, a major target for Democrats seeking revenue and redress of what they consider inordinate coddling of the energy industry.

While McConnell is a reliable conservative on most issues, he parts company with most of his fellow Republicans when it comes to proposals for a constitutional ban on flag burning. His opposition to such a ban is tied to his broader defense of the First Amendment, and to his contention that it protects political speech, including protests such as flag burning. That was one of the reasons he said he opposed the McCain-Feingold campaign-finance bill.

Like his Democratic counterpart, Harry Reid, McConnell is both a lawyer and a proud career politician. Both are steeped in the ways of the Senate, and both are ready to use that knowledge to either promote or thwart a legislative agenda. The duel of wits between the two may well dominate the Senate in the 110th Congress, at least in the early going.