Accessibility links
Profile: Harry Reid, Senate Majority Leader Reid is a Mormon, but also a strong and often partisan Democrat, so he is unlikely to prioritize hot-button social issues on the Senate agenda. His main challenge is what to do about Iraq, an issue on which he has already broken with some fellow Democrats. 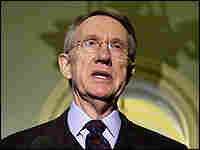 What may be most striking about Harry Reid, the most un-striking of politicians, is how thoroughly different he is from the last Senate majority leader, Republican Bill Frist.

Consider how each rose to the top.

Frist, a Princeton-Harvard trained surgeon and business executive from a powerful Tennessee family, came late to politics and defeated a three-term U.S. senator in his first bid for office. While still relatively new to Congress, he vaulted to the Senate's most powerful position late in 2002.

In his own path to glory, Reid was far more turtle than hare. He was born in a home without indoor plumbing in Searchlight, Nev., which was barely a town at the time. He went to public colleges in Utah and competed as an amateur boxer. He began his political career in the Nevada Assembly and on Nevada's gaming commission, trying unsuccessfully in the 1970s for the Senate and for the mayor's office in Las Vegas. But in 1982, he won that city's seat in Congress and held it four years before moving on to the Senate.

As a senator, Reid made himself useful to former Democratic leaders, from Robert C. Byrd to George Mitchell and Tom Daschle, rising to be Daschle's right-hand man. Reid worked as quietly as he spoke, rounding up votes behind the scenes as his party's whip and mastering the Senate's intricate and indispensable rule book. When Daschle lost his seat in 2004, Reid seemed almost reluctant to step into the spotlight as Daschle's successor.

Still, in the past two years as Senate minority leader, Reid has shown that his pugilistic skills were not limited to the ring. Reid often used the minority party's substantial procedural powers to play hardball with the Republicans. And he was often able to outmaneuver Frist, on matters ranging from judicial filibusters to intelligence probes into the Bush administration's use or abuse of intelligence on Iraq.

Reid also takes the top Senate leadership post having been remarkably blunt in his language about President Bush, whom he has branded both a loser and a liar. Although Reid later expressed regret about his choice of words, it's unlikely the president has forgotten them. And don't expect Reid to let up in his casting of Mr. Bush as the nation's No. 1 political problem.

Reid himself has had a bit of explaining to do about things he's done or hasn't done. Just before last fall's elections, questions were raised about a land development deal in Nevada that netted Reid a tidy sum and that appeared to conceal his business partnerships. He maintained this was all due to sloppy bookkeeping and that he'd done nothing untoward, just as he denied any impropriety for having accepted complimentary tickets to boxing matches at a time when that industry was facing regulatory changes. Reid now says he won't be taking such freebies any more.

There are also ties, albeit somewhat tenuous, to jailed lobbyist Jack Abramoff. Well before his star crashed, Abramoff hired one of Reid's former legislative assistants, who later held a fundraiser for Reid in Abramoff's Washington offices. And Native American tribes that were clients of Abramoff contributed a total of $29,500 to Reid's campaign funds over four election cycles — contributions Reid insists had nothing to do with Abramoff. And while Reid did oppose allowing Indian tribes to run off-reservation casinos (a stance helpful to some of Abramoff's tribal clients), he has argued he did this in defense of Las Vegas casinos (which oppose all Indian gambling).

With these murky patches clouding his own ethics record, it's not surprising that Reid plans to make earmark and lobbying reform his first legislative priority. Reid has long served on the Appropriations Committee, whose members can collect political support from other lawmakers by "earmarking" certain amounts for their home state projects.

Earmarks are so much a part of the spending process that the Washington establishment was shocked to learn in December that Reid specifically endorsed dropping all requested earmarks from the spending bills that were pending when the last Congress adjourned.

Reid said then that earmarks would be considered for the 2008 appropriations bills the Senate takes up this year, but only under the new (and as yet unwritten) guidelines he has promised.

A Democrat and a Mormon

Reid is a strong and often partisan Democrat, but he is also a lifelong Mormon (the first to lead the Senate). So he is unlikely to prioritize hot-button social issues on the Senate agenda. He has promised to push once more for stem-cell research legislation, which prompted President Bush's first and only veto.

Reid is also on record opposing abortion, gay marriage and flag burning, but don't expect to see these issues being debated on the Senate floor. He has nothing to gain by forcing fellow Democrats to vote on them, especially those vying for the Democratic presidential nomination in 2008.

Indeed, presidential politics are likely to be the subtext for much of what happens in the Senate under Reid's leadership over the next two years. With presidential hopefuls Hillary Clinton, Barack Obama, Christopher Dodd, Joseph Biden and John Kerry on the Democratic side of the aisle — lined up against fellow aspirants John McCain and Sam Brownback on the Republican side — the logic of Senate votes may have less to do with what can survive a presidential veto, than what Democrats can point to as one more reason to put one of their own in the White House.

The Challenge of Iraq

In October 2002, Reid was one of those in a divided Democratic caucus who voted for the resolution authorizing President Bush to wage war in Iraq. That war now looms as the new leader's most thorny challenge. Already Reid has broken ranks with some fellow Democrats, saying he'd likely support the temporary surge in U.S. troop levels in Baghdad that many expect President Bush to propose.

Reid will also have to decide how much to challenge the president's expected request for more than $100 billion in emergency funds for Iraq and Afghanistan. Denying any of that funding could open Democrats to charges they're undercutting U.S. forces. But going along with Mr. Bush's supplemental request (which Congress has already ruled should be part of the regular budget) would likely anger voters who elected Democrats to end the war in Iraq, not fund it.

So as trial lawyer Harry Reid takes on the majority leader title previously held by heart and lung surgeon Bill Frist, hang on. It should be an interesting — and possibly bumpy — ride.