Accessibility links
Profile: John Boehner, House Minority Leader Ohio Republican John Boehner worked his way to the top of the GOP leadership with a style that stresses consensus-building rather than ideological purity. Now his challenge is to calibrate the Republican response to Democrats, determining when to cooperate and when to work against them. 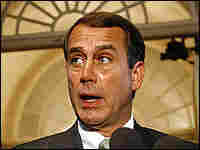 John Boehner is instantly recognizable around the Capitol for his perpetual dark tan, dapper appearance and the cigarette that seems constantly at hand (though he surely knows better.) He is also known for surviving the ups and downs of political fortune and intra-party wars.

Boehner typifies the kind of Main Street Republicanism that has long dominated in Ohio, but which has been eclipsed in recent years by Sunbelt conservatives in the House. A survivor by nature, he worked his way to the top of the GOP leadership with a style that stresses consensus-building rather than ideological purity.

This has been demonstrated in the past by a willingness to work with Democrats -- as he did as chairman of the Committee on Education and the Workforce earlier in this decade. And it promises to serve him well as he leads a party that finds itself in the minority for the first time in 12 years.

Boehner's rise to the top of the GOP ranks was not always smooth. First elected in 1990, he gained notoriety as a member of the "Gang of Seven," obstreperous freshmen who called attention to abuses of the House Bank by House members in both parties. That brought him to the special attention of Newt Gingrich, the Georgia Republican who was then the minority whip and pushing hard to become the party's leader.

After the 1994 elections, in which Republicans captured control of the House for the first time in 40 years, Boehner was elected GOP Conference chair, fourth in the leadership pecking order.

But Boehner's climb up the leadership ladder was soon to be interrupted. After a stormy 104th Congress, and the re-election of Bill Clinton in 1996, several members of the GOP leadership team were dismayed at Gingrich's confrontational style and the GOP's declining popularity. In the summer of 1997, several members of the leadership team attempted to overthrow Gingrich. They came within hours of a floor motion to strip him of his powers before they were exposed and thwarted.

Boehner's role in the attempted coup (if any) was unclear, and he remained in his job for the remainder of the 105th Congress. But after the GOP lost five seats in the 1998 midterm election, Gingrich was ousted as leader, and Boehner was challenged for the conference chairmanship by Oklahoma's J.C. Watts. Republicans, disgruntled at the returns and looking for scapegoats, elected Watts.

At such a point, some members might have considered the arc of their careers to have ended. But Boehner persevered, and just two years later he was very much in gear again. He became chairman of the Education Committee, where he worked with the senior Democrat on the panel, George Miller of California, to draft and win bipartisan support for President Bush's signature No Child Left Behind education standards bill. He also successfully shepherded special education legislation.

Boehner also took care of internal politics. He continued to be a prolific fundraiser for his GOP colleagues and a genial golfing buddy to lobbyists -- though he has been careful not to run afoul of ethics rules. And he took care of his relationships with party colleagues, who early in 2006 returned him to leadership. With the fall of Tom DeLay (who was indicted on political corruption charges in Texas), the main obstacle to Boehner's return was eliminated. Boehner defeated a DeLay protege, Roy Blunt of Missouri, to become GOP majority leader (the No. 2 position under Speaker Dennis Hastert).

Staying Relevant in a Democratic House

The GOP lost the House in the elections of November 2006, but Boehner, on the job for less than a year, was held blameless. With Hastert deciding not to seek a leadership position in the new Congress, Boehner became the top House Republican and was easily elected minority leader, crushing a challenge by Mike Pence of Indiana.

Now his challenge is to calibrate the Republican response to Democrats, determining when to cooperate and when to work against them. It is an unaccustomed role for Republicans in the House -- particularly those who rose and ruled in the Gingrich heyday. But Boehner has already shown far more adaptability than most of those elected in his era.