Accessibility links
Profile: Nancy Pelosi, House Majority Leader Pelosi is hailed for having reined in disparate views within the Democratic Caucus. Now, she'll have to keep that discipline in place, while balancing the demands of her liberal base with those of more conservative party newcomers. 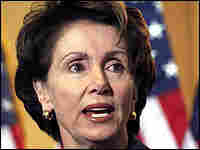 Democrat Nancy Pelosi of California is the first female speaker of the House of Representatives. Getty Images hide caption

Nancy Pelosi stood this week at the center of a swirl of events in Washington that mark her ascent to the speakership, events so numerous and elaborate as to invite comparison to a presidential inauguration. As the first woman to hold the speaker's gavel, Pelosi is now right behind Richard B. Cheney in the presidential succession.

Beyond that, she is now the most powerful Democrat in the federal hierarchy, occupying an office second only to the presidency itself in both ceremonial and actual authority.

More than anyone else, Pelosi has had her life transformed by the elections of November 2006, which returned Democrats to the majority in the House for the first time in a dozen years. But in her round of celebratory events, she has tried hard to re-emphasize the components of her life as it existed before that electoral breakthrough.

For example, she slated a trip to Baltimore, touching on the roots of her family and her calling by visiting statues of her father, Tommy D'Alesandro, the city's mayor and then congressman in the 1950s and 1960s. The city dedicated a street to her, calling it the Nancy D'Alesandro Pelosi Via. During the week, she also attended a dinner in her honor at the Italian Embassy. Pelosi also set aside time to attend mass at Trinity College, the Catholic school in Washington, D.C., from which she graduated in 1962, and an interfaith prayer service honoring the uniformed military at St. Peter's Catholic Church.

A Milestone For Women In Politics

But if all those events represented her background in traditional, ethnic, urban, Catholic America, there was also a women's tea at the Mellon Auditorium in the Commerce Building, saluting her as the first woman speaker and also marking the passing in 2006 of Ann Richards, former governor of Texas. Richards and Pelosi represent two of the grandest figures to date in the political division of the American women's movement.

Both women came to office in middle age after years in more conventional roles. Pelosi married investment banker Paul Pelosi and moved to his home city of San Francisco, where they raised five children. Pelosi became active in local politics, raising money and helping others run for office. She served as chairwoman of the California Democratic Party in the 1980s, when Ronald Reagan was president and the GOP dominated statewide office as well.

Making A Place For Herself In D.C.

Pelosi forged an alliance with party leaders in San Francisco, including longtime congressman Phil Burton and his widow, Sala, who took his seat in 1983. Pelosi had Sala Burtons support to succeed her, and did so in 1987. Arriving in Washington, she already knew the town and was eager to make herself a new place in it. She rose rapidly through the ranks of the Democratic caucus, serving on important and powerful committees, including Appropriations and Intelligence. She also served a term on the House Committee on Standards of Official Conduct, commonly known as the ethics committee. That experience will likely come in handy as Democrats attempt to rewrite the ethics rules for the House of Representatives.

Pelosi's 10 years on the Intelligence Committee were the longest continuous period of service in the panel's history. During her two years as the top Democrat on the committee, she helped lead a review of U.S. intelligence in the wake of the terrorist attacks of Sept. 11, 2001.

In that same year, Pelosi made a bid for the No. 2 job in the House Democratic leadership, the minority whip office previously occupied by David Bonior of Michigan. Her main rival for the job was Steny Hoyer of Maryland, whom she had first met when both interned for Maryland Sen. Daniel Brewster four decades earlier. Pelosi prevailed in that showdown, with the aid of friends from Appropriations such as John Murtha of Pennsylvania.

By winning the whip job, Pelosi positioned herself to become minority leader when Richard Gephardt of Missouri left to focus on a 2004 presidential campaign. Hoyer then became the minority whip, and with Pelosi's elevation to speaker, he becomes House majority leader.

There was one more echo of their old rivalry, however, when the party organized itself for majority status in November 2006. Murtha, Pelosi's longtime ally, stepped up to challenge Hoyer for the No. 2 job and had Pelosis strong backing for that job. Hoyer won this test decisively, however -- which started Pelosi's tenure with an embarrassment.

As the first Temale leader of either party in the House, Pelosi is hailed for having reined in the widely disparate views within the Democratic Caucus. She has achieved a level of discipline during House votes that has scored several legislative wins for the Democrats, mostly by way of defeating Republican-sponsored bills. Among Democrats she is known for being a shrewd dealer who insists on discipline from her members. And as the leader who finally brought the party back from minority status, she and her team will enjoy at least a season of gratitude and support.

But she will need all the help she can get. Already, she has had to deal with divisive elections and selections for committee slots and chairmanships. Her refusal to allow Jane Harman to continue on the Intelligence Committee and become chairman has been viewed as personal and ill-advised, particularly as Pelosis choice for the job, Silvestre Reyes of Texas, has shown himself to be relatively ill-informed on Iraq and other issues.

Since she became Democratic leader, Pelosi has had to perform a tricky balancing act between representing the varied viewpoints of her caucus, and representing one of the most liberal districts in the country: San Francisco. At home, Pelosi is often criticized for being too middle-of-the-road and beholden to corporate interests.

This balancing act will only get more difficult now, as the Democratic takeover was fueled by the recruitment and election of more conservative Democrats around the country. These new members will also be among the party's most vulnerable incumbents in 2008, putting pressure on Pelosi to keep her party and its agenda in the mainstream in the 110th Congress.