Accessibility links
The Buzz over Energy Drinks Energy-drink makers have found an eager and booming market in teens. But researchers warn that teens don't know how much caffeine they're consuming, or how easy it is to become dependent on the energy drinks.

Listen
The Buzz over Energy Drinks 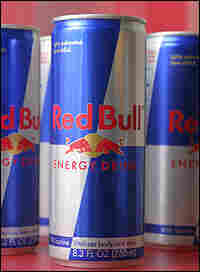 Evan Cathcart, 19, says a can of Red Bull gives him a quick boost when he's skateboarding.

"I can skateboard longer and it tastes good," Cathcart says. He's always assumed energy drinks are more potent than Mountain Dew or Coke, but he says it's unclear exactly how much caffeine they contain because it's not labeled on the can.

In order to determine how much caffeine is contained in various brands of energy drinks, toxicology professor Bruce Goldberger of the University of Florida tested 10 drinks. He found a significant range of caffeination.

He found one of the energy drinks, Hair of the Dog, contained no caffeine. Another drink, a 16-ounce serving of SoBe No Fear, contained 141 milligrams of caffeine, which is the equivalent of almost five cans of Coke or 1 ½ cups of a typical brewed coffee. Goldberger also tested an 8-ounce sugar-free can of Red Bull, which had twice the caffeine of a can of Coke or Pepsi.

Caffeine researchers who've studied the effects of the stimulant on the body say there's nothing alarming about the amount of caffeine in a single can of these energy drinks.

But experts say teens often don't realize how much caffeine they're drinking. And many teenagers also don't know how easy it is to become dependent on the stimulant.

"If they use it for three or five days in a row, and then suddenly quit, then they're going to be thrown into withdrawal," says Roland Griffiths, professor of behavioral biology at Johns Hopkins University.

Withdrawal symptoms can include headaches, mood swings and trouble concentrating. Some people are more sensitive to stimulants than others, so some teens may get a bad case of the jitters from very little caffeine.

"I think it's important that people recognize that caffeine really is a drug," Griffiths says, "and that they accord it respect as a drug."

Teens and young adults seem to be drinking more of these caffeinated beverages than ever. Two years ago, when Bruce Goldberger first began to study energy drinks, he found 10 brands.

As the market expands, some brands are pushing caffeine levels to new highs. One drink, called Cocaine and made by Redux Beverages, contains about three times as much caffeine as Red Bull. To publicize its drink, the company sponsors contests inviting contestants to submit wacky videos they've put on Web sites like YouTube or MySpace.

"They send us the videos," says Redux's Hannah Kirby, "and then we send them out a T-shirt and samples of the beverage. We've done a lot of stealth marketing."

Energy-drink makers also market their products to teens and young adults by sponsoring sporting events or athletes who compete in extreme skiing, skateboarding or BMX biking.

"A lot of these energy drinks, ones like Monster, they catch on by word of mouth," says energy-drink blogger Dan Mayer.