Accessibility links
Guantanamo Tribunals May Resume This Summer Hundreds of detainees, swept up during the war on terrorism, are still being held at the U.S. Naval Base in Guantanamo Bay, Cuba. Many of them have not been charged, but some, at least, will be facing some form of trial this year as military tribunals resume. 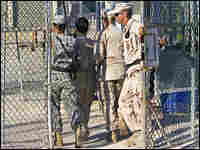 A detainee is led back to his cell at Camp Delta's Maximum Security area on the U.S. Naval Base at Guantanamo Bay, Cuba, Dec. 6, 2006. Paul J. Richards/AFP/Getty Images hide caption 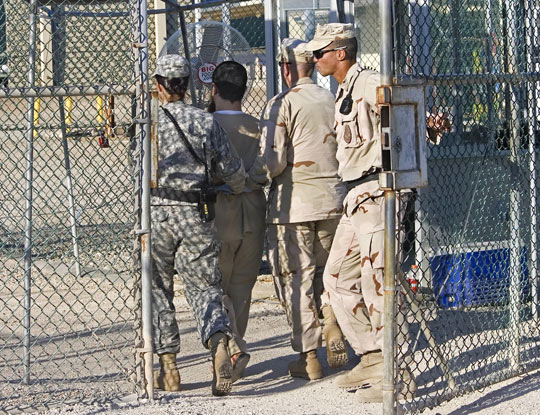 A detainee is led back to his cell at Camp Delta's Maximum Security area on the U.S. Naval Base at Guantanamo Bay, Cuba, Dec. 6, 2006.

Hundreds of detainees, swept up during the war on terrorism, are still being held at the U.S. Naval Base in Guantanamo Bay, Cuba. Many of them have not been charged, but some, at least, will be facing some form of trial this year as military tribunals resume there. Renee Montagne speaks with Jackie Northam about their possible fate in the coming year.

Montagne: Is there any firm date when these military trials will resume?

Northam: So far, there is no firm date. Administration officials are still rewriting the rules for the trials. Pentagon officials say they're looking at mid-summer, probably July, to get the trials up and running again. Ultimately, they're hoping to try about 70 of the detainees. But so far, only 10 prisoners have been charged. The military commissions have been an on-again, off-again process, but the Pentagon hopes this time that the trials will resume.

There are at least 14 high-profile terror suspects among the detainees at Guantanamo.

That's right. The Pentagon is generally tight-lipped about these 14 terror suspects. Among them are several alleged planners of 9/11, including Khalid Shaikh Mohammed and Ramzi Binalshibh. These men were held in secret CIA prisons for several years. And Pentagon officials I spoke with say the CIA continues to have control over them, even though they're at Guantanamo. None of these 14 new arrivals are expected to be among the first to head into court, if and when the trials resume.

They haven't even gone through what's called a combatant status review tribunal. This is where a panel of military officers will determine whether the 14 should be classified as enemy combatants. If they are, the Bush administration says they can be held indefinitely and that they can't challenge their detention in U.S. courts. Khalid Shaikh Mohammed and the others are expected to go through that hearing this month.

It was five years ago this month that prisoners began arriving at Guantanamo. At one point there were nearly 800 prisoners. Many of them have been released. What are the chances we'll see more detainees let go this year?

Well, the Pentagon has been trying to reduce the numbers for a couple of years now and about 375 men have been released or transferred. And transferred is where the prisoner is sent to his home country for further detention. However, most of them have been set free. Frankly the Pentagon has had a lot of trouble moving scores of prisoners off the island.

The State Department becomes involved and tries to work out the details for the men's release or transfer. It will not send anyone back to a country where there's a real fear that the prisoner will be persecuted. But many countries simply will not take the detainees, saying he is not really a citizen or they just don't want him back. Right now, there are about 85 Guantanamo detainees who fall into this limbo, where the Pentagon has cleared them for release or transfer and yet they're still in their cells.

Jackie, you travel regularly to Guantanamo. How has the prison camp changed over the years?

Each commander has his own way of doing business and leaves his own imprint at Guantanamo. Navy Rear Adm. Harry Harris is the current commander, and I think it's fair to say things have tightened up since he arrived last spring. At one point, many of the detainees, hundreds of them, were allowed to live in a camp called Camp 4, where they could eat together, they could pray together, they could go and play soccer together.

But shortly after Rear Adm. Harry Harris landed at Guantanamo, three detainees committed suicide, which has never happened at the prison camp before or since. Then there was a riot and that was another first. And as a result, Harris has clamped down on many of the detainees' privileges. He also authorized that the new prison there, it's called Camp 6, be redesigned. It was suppose to be a medium-security facility, where again, detainees could eat and pray together. It's now a maximum-security prison and Adm. Harris told me the last time I was there that there are no medium-security terrorists, only maximum-security terrorists. So he runs a tough ship down there right now at Guantanamo.