Accessibility links
Perspectives on the Change in Power Tuesday marked the first handover of the House speaker's gavel from one party to another since January 1995. Robert Siegel offers perspectives on the shift in political power in Congress.

Perspectives on the Change in Power

Perspectives on the Change in Power 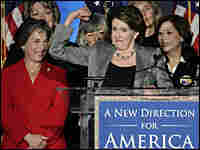 Speaker of the House Nancy Pelosi (D-CA) shows a gesture of strength during a women's tea to pay tribute to the late Texas Gov. Ann Richards , Jan. 3, 2007. Pelosi will lead the Democrats as they take control of the House for the first time in 12 years. hide caption

One of the first lessons you learn when you move to Washington is that presidents and Cabinet secretaries come and go, but Congress is forever.

Today, we're watching the first handover of the House speaker's gavel from one party to another since January 1995. Twelve years ago, Linda Wertheimer and I broadcast live from the Capitol. My only NPR colleague who was a working journalist at the time of the previous handover, in 1955, was Daniel Schorr; he's 90 now and was, I believe, CBS's man in Moscow then.

In recent years, the wisdom has been that incumbents are virtually unbeatable -- barring scandal (and not always then.) Incumbents have name recognition and pork, and sometimes they get an assist from a friendly, re-districting state legislature.

So, a sufficient turnover to alter the majority is rare news.

Unlike a handover of the White House, a change in Congress is a matter of degree. The old regime is not banished to the golf course; it just loses votes, staff, prime Capitol Hill real estate and the power to set the agenda.

John Boehner of Ohio, the Republican leader in the House, talked with me this morning about the difference between life in the majority and, now, in the minority. He recalled the burden of governing as the majority party, how much work went into organizing the House back in 1995 and passing the Contract with America. He agreed with my description of what's in store now, that "life will be sadly easier."

On All Things Considered, we're following two freshmen this year, both of whom got into their offices Wednesday for the first time. Peter Roskam is a Republican who held onto the Illinois seat vacated by Henry Hyde's retirement. Gabrielle Giffords is a Democrat who won the Arizona border district vacated by the retirement of Republican Jim Kolbe.

On the issues, they have plenty of differences. Giffords, the Democrat from a district overwhelmed with illicit Mexican border crossings, would gladly approve the kind of immigration bill that President Bush proposed last year. Roskam, the Republican, campaigned successfully against the bill, which he deemed "an amnesty" for illegal aliens.

But they have a few things in common. They agreed that they both depend on independent voters, people who are not driven by party affiliation. They both talk about a fair, open House. And they both drew high numbers in the new office lottery, so they are based on the top floor of the most distant House office building.

Roskam and Giffords both exude enthusiasm for the tasks ahead of them, and they'll be back on All Things Considered during the year as big issues come before the Congress. They are also wonderfully cast against type: She, the Democrat, is the Glock-owning gun fancier; he, the Republican and onetime Tom Delay staffer, is a trial lawyer.

So they will be an interesting pair to keep an eye on, as we all watch this new Congress.