Accessibility links
Something in the Way You Remix When producer Giles Martin took on the challenge of remixing Beatles songs using only old mastertapes, he was understandably nervous. But now that it's out, people love Love.

Listen
Something in the Way You Remix 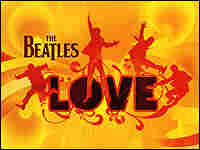 'Love' is the soundtrack to a Cirque du Soleil show that celebrates The Beatles and their legacy. Capitol Records hide caption

Listen to more of Bob Boilen's interview with Giles Martin.

When Cirque du Soleil needed music for a Beatles-inspired theatrical performance, the call went out to George Martin, the Beatles' longtime producer. Now in his 80s, Martin asked his son, Giles, for help. And the two of them set out to remix the group's classic songs, first for the performance and then for an album.

Creating a new Beatles album using only old four-track recordings was no easy task. Giles Martin said that for him, the project all started with a demo tape he put together, adding percussion to Here Comes the Sun and I Am the Walrus. He let Ringo Starr and Paul McCartney listen.

"You know, they loved it. In fact, [they] came in and said maybe you should go a bit further," Giles Martin says.

An accomplished producer and musician in his own right, Giles was still nervous about tweaking the Beatles catalogue — a sacrilegious act in some music circles. But with his father by his side, he plowed ahead.

"The two of us sat down and I went through stuff with him. I played him stuff that he couldn't remember. And I certainly wasn't aware of most of it. And I wrote down keys and tempos and interesting parts," Giles said.

The father-son team reimagined the Beatles, merging bass lines and guitar riffs and choruses from old favorites. And in the end, it all comes together on Love.

The Official Beatles Website
Listen to Selections from The Beatles 'Love'