Accessibility links
Female Activists a Force in Male-Dominated Gaza Palestinian women are moving to the forefront of activism and even taking part in regional violence. In male-dominated Palestinian society, the increased participation marks a significant change. 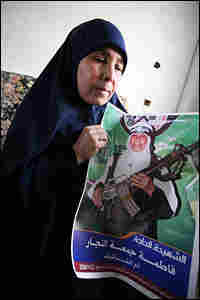 Fathiya al Najar holds a poster of her mother, Fatma al Najar, who blew herself up with an explosives belt around her waist in November. The bombing lightly wounded two Israeli soldiers. The posters are now ubiquitous throughout Gaza neighborhoods where Hamas is dominant. George Azar hide caption 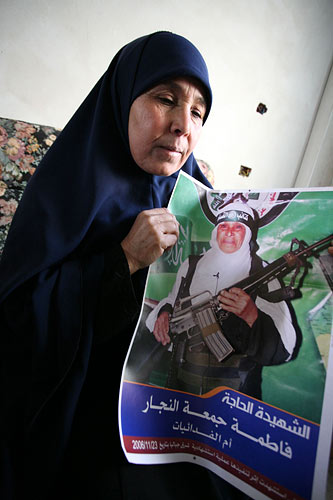 Fathiya al Najar holds a poster of her mother, Fatma al Najar, who blew herself up with an explosives belt around her waist in November. The bombing lightly wounded two Israeli soldiers. The posters are now ubiquitous throughout Gaza neighborhoods where Hamas is dominant.

My mother martyred herself as a kind of gift to all the Palestinian prisoners and as an answer for those cowards looking for peace. 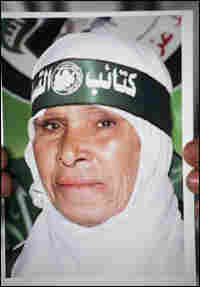 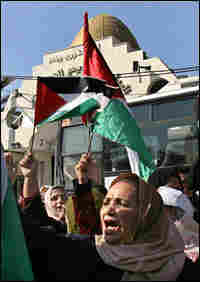 Palestinian women rally against the unrest and lawlessness in Gaza during a protest in Gaza City, Dec. 21, 2006. Said Khatib/AFP/Getty Images hide caption 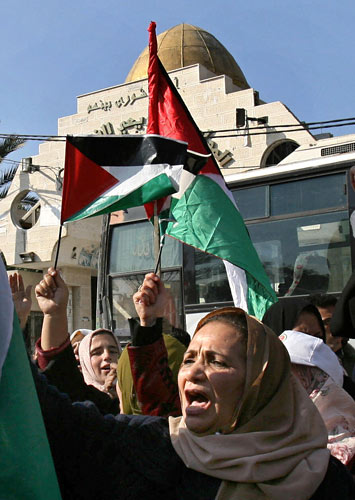 Palestinian women rally against the unrest and lawlessness in Gaza during a protest in Gaza City, Dec. 21, 2006.

Amid ongoing violence in Gaza, Palestinian women are increasingly moving to the forefront of activism and, in some cases, taking part in the fighting. Long kept in the social, political and military background in male-dominated Palestinian society, women's increased participation marks a significant change.

The activism also takes starkly different forms: Secular women have led protests against lawlessness in Gaza, while the first suicide bombing in months by the Islamist group Hamas was carried out by a 72-year-old Gaza grandmother.

Fed up with the specter of factional gunfire when walking to the store or taking their children to school, a group of angry and largely secular women in central Gaza City recently marched in the streets, demanding change.

"Where's the safety, where's the security? Where is the law?" the women chanted.

In conservative, male-dominated, clan-based Gaza Palestinian women have long been forced to keep their opinions and ideas confined inside the household walls. But in an important shift, Gaza women are increasingly taking action and expressing their views more and more in public.

At the rally, Ruba al Jamal says many women in Gaza are fed up with factional violence, lawlessness and ineptitude by what she labels "the so-called" Palestinian Authority.

"We want a new government, one that is not Hamas or Fatah," she says. "A government that can secure our kids going to school, not one that keeps silent while our people are killed in front of our face!"

Naila Ayesh is the director of the Women's Affairs Center, the only nongovernmental agency in Gaza aimed at strengthening women through economic and educational programs. Ayesh says she has recently seen a new rise in activism from largely secular women who are not part of any political faction.

"I think the Palestinian woman feel, now, more seriously and worry about what's going on in our society. Now most of the women are not in parties," Ayesh says. "These women now go out of their homes asking to be part of stopping this violence inside our society."

But in this traditional society -- where many women are afraid to leave home without covering up in a full head scarf -- the militant Islamists have made the biggest inroads in harnessing women's power and activism.

Thousands of women regularly turn out for rallies by the ruling Hamas movement. In November, during an Israeli military operation in the town of Beit Hanoun, dozens of Hamas women risked Israeli tank and machine-gun fire in a successful effort to shield Hamas gunmen holed up in a local mosque. The diversionary march -- in which one woman was killed -- allowed the militants to escape out the back door.

One of the Hamas women there was a recently widowed 72-year-old named Fatma al Najar. Over tea in her barren, unheated apartment in the Jabaliya refugee camp, Fatma's daughter Fathiya al Najar describes the family's reaction when her mother returned home that night.

"She came back from Beit Hanoun and we said, 'Thank God you are safe.' And she replied, 'Safe, safe from what? My people are being killed. I wish I had been killed there.'"

A few days later, Fatma al Najar, who had more than 40 children, grandchildren and great-grandchildren combined, became the oldest Palestinian suicide bomber. She approached an Israeli military checkpoint and blew herself up with an explosives belt around her waist. Israel lists her as another Palestinian terrorist. Her family and friends call her a martyr.

"Of course I feel very sad," Fathiya al Najar says. "No one's mother can be replaced. But I'm also very proud of what she did. There are cowards here who are looking for peace and those people are not doing anything to stop the Israelis and their massacres. My mother martyred herself as a kind of gift to all the Palestinian prisoners and as an answer for those cowards looking for peace."

When told that her mother killed only herself that day, that the bombing lightly wounded two Israeli soldiers who've since returned to duty, al Najar shakes her head and denies it. Then, after a pause she says, "Nevertheless, I bet she scared those soldiers like hell. To see an old lady sacrifice herself for her people."

"All the women are very proud of my mother," al Najar says. "We love life, but living under such horrible circumstances, I would want my sons to take such action and I'd do it myself even."

Ayesh, with the Women's Affairs Center, says more-secular groups simply can't compete with Hamas when it comes to organizing women. She says the Islamists use female leaders in the women-only sections of worship halls to organize women and foster radical activists like Fatma al Najar.

"Hamas promises food, distributes things for them, gives them money," she says. "So these things are helping Hamas to have, let's say, the majority in our society."

Ayesh says that despite Hamas pledges to the contrary, the Islamists have started to impose their strict social agenda on Gaza society -- targeting loose dress, racy music and other things they deem un-Islamic. They're doing this, Ayesh says, partly through force and partly through organizing women in every Hamas-run mosque.